Leaving is always easy once you have decided to leave. But once you have left, there will always be a piece of you that craves to go home again to the things you know, love and miss. You can try all you want to recreate home in your new home town by decorating your house with American fashions, cooking American recipes and listening to American music from home. But it just won’t ever be the same as being home.

Here is a list of the things I miss (no matter how strange they are) about being gone from California/US.

No matter how long I am gone for, there is always this underlying craving of home. Nothing says California more than In N Out on a nice warm, sunny day with a Double Double Spread Only and and ordering Animal Fries from In N Out’s Secret Menu with a Vanilla shake! It’s always the first thing I do upon arriving in California no matter what!

2. Hole in the Wall Mexican Food

Any day is a good day for Mexican food and in Germany, its hard to find good Mexican food. But you won’t find Carne Asada Fries or a California Burrito unless you are in California. There is something magical about getting dirty Mexican food after a night drinking in the bars at 2am that you just cant get here. I once ordered a burrito with Mexican rice and was disgusted at the rice because it was mixed with tomato sauce. I’m sorry, but that’s gross.

Whether you like to just look at it, swim in it, lay in it, take photos of it or smell it, you will undoubtedly miss it. I miss taking a drive along the coast alone or with friends just to enjoy the view, spending long days laying out at the beach and surfing the waves with my boogie board. (No, I am not a surfer just because I’m from California!) I miss the sound of the waves crashing against the shore and I know I wont hear that sound again unless I find a nice beach to lay on. I miss the beach so much I even bought a 6 minute “song” of the waves crashing on the coast that I put on repeat when I cant sleep. 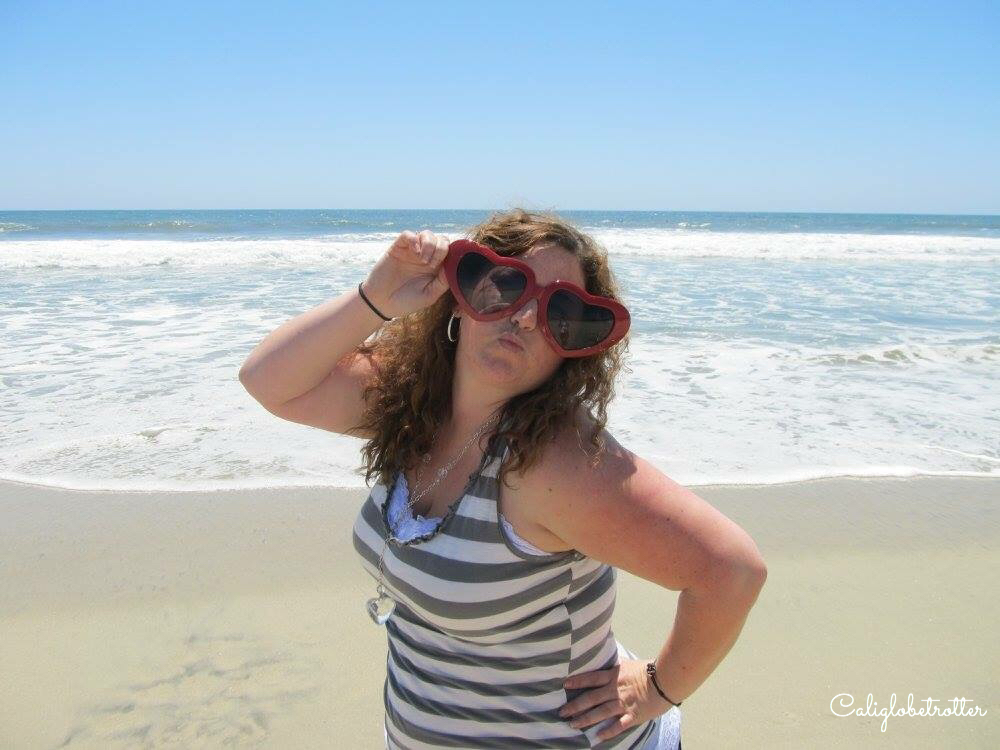 One of the most beautiful things about being from California is having an endless amount of sunsets to fill your days. There is nothing more relaxing and enjoyable than gazing out at a beautiful sunset setting off in the distance over the never ending Pacific ocean. I will miss this view every day until I return.

No matter how much you hated sitting in traffic in LA, you will still find yourself missing it. You will probably miss those long hours butt to butt in your car to other cars with the windows rolled down and the music turned up. Germany just doesn’t have the amount of traffic that California has and yet I strangely miss it. That was the best way to get a driver’s tan!

Yes, Germany has malls, but from what I have seen they are never the biggest but I still miss American malls that you could stroll around for hours on a hot summer day or a bitterly long winter day. I miss the food court which always has a Cinnabon.

Again, Germany has hundreds of Starbucks around except in the town I live in! I miss it so much I even joined a Facebook group titled “Starbucks for Regensburg”. But I don’t just miss it because its not in my town, but I miss it for the flavors. Germany is a PlainJane when it comes to coffee. You might be lucky if you can find a few basic flavors like Vanilla, Coconut and Hazelnut to go in your coffee. I miss my Raspberry White Chocolate Mocha. Asking a German Starbucks if they have or Apple Cinnamon Crumble Latte is a waste of breath. Although fall 2014 was the first year Germany offered Pumpkin Spice Latte (at some locations). I just cant drink coffee without dosing it in a a different flavor.

I cant tell you how much I miss my hole in the wall Chinese restaurant around the corner from where I lived in college. Germany has Chinese food, but its not anything like we know in the states with Orange Chicken or Honey Walnut Shrimp. Here, they batter strips of chicken or duck, drizzle on some sweet & sour sauce and if you’re lucky, you can find Egg Fried Rice but don’t get your hopes up.

You can kiss both of these stores goodbye once coming to Germany because they are strictly American. They have The Body Shop, but I don’t like their products nearly as much and they seem way more expensive. You can find other lingerie stores for women’s undergarments, but it will never be Victoria’s Secret. I cant tell you how much I miss the perfume section and whenever I go home, I stock up on my favorites!

10. Disneyland and other Amusement Parks

Germany has amusement parks and yes there is a Disneyland in Paris, but I have yet to go. But those dreams of just deciding not to go to work or school because you would rather go to Disneyland will become a distant memory. You will forever cherish your Disneyland session ticket.

Although I always bitch and moan about the weather when it gets about 70*F, I still miss having perfectly warm, blue skied weather. You will miss “struggling” with the mild California weather where you might be lucky if you have to pull out a “thicker jacket” a few days out of the year. I didn’t even own scarfs, gloves and winter coats until I moved to Montana. Now I have a whole winter wardrobe to last me the 8-10 months of cool/winter weather. I miss not having to look outside my window and checking the thermometer in order to decide what I will wear today.

Words like “dude”, “bro”, “gnarly”, “awesome” and “hella” will get you strange looks in Germany. Californians always think we don’t have an accent, but we have slang that is only befitting when in California. I feel like I am trying to hard to keep my California slang in my vocabulary when I splurt out “dude” in a conversation.

I never knew there were different seasons for different fruits and vegetables until I lived in Montana and I couldn’t find avocadoes in the winter. Coming to Germany, its still hard to find things like raspberries and blue berries during certain seasons and if its an off season, you can beat you will pay 1.99euro or more for a handful of raspberries. I’m sorry, but I miss having the luxury of having any produce I want all year round!

One of the beautiful things about America is that we apparently never sleep and therefore can always find something open to get some of the basic things we might need during the middle of the night like a candy bar, some beer or wine or perhaps some chips and a magazine. Here in Germany?? Good luck finding a cheap convenience store in the day time and don’t bother looking for one a 2am. They are ridiculously expensive and it’s just cheaper to go to a normal grocery store to buy what you need but those all close at 8pm (in Bavaria).

You never know if the urge to have something to eat will hit you at 2am, especially after having worked a late shift. One of the most enjoyable past times during college was getting off late from work and going to grab something to eat with a group of friends, especially after a night drinking. Sometimes Denny’s or In N Out at 2am is the perfect remedy to a long day.

There is something about the earth moving that keeps you on your toes. The excitement and fear we experience during a small little earthquake keeps your adrenaline running. After an earthquake, you always gossip about it or run to Facebook to check and see who else felt it. And when its gone? There is a sort of emptiness now which keeps you waiting for the next little earthquake only to realize you now live somewhere where there are no earthquakes (on any normal basis). Now, you get concerned when you see any news article about an earthquake hitting California.

17. The Absence of Yucky Bugs

I miss the absence of bugs in my life. During the winter in Germany, its fine. The creepy crawlies stay where they belong, but in the warmer months, I am eaten alive by mosquitos. I had to go out and actually buy screens to install in my windows of my apartment because I love to have my windows open, but not when the mosquitos suckle my blood.

Even though Germany doesn’t have a lot of traffic, they don’t have a carpool lanes. I miss feeling like I was better than everyone else driving alone because I got to speed ahead of all the traffic just because I had someone in the car. Germany just doesn’t need that, they drive everywhere fast 🙂

19. The Endless Amount of Microbreweries

California is definitely experiencing an increase in quality beer being produced at microbreweries. Nothing like spending a nice weekend hoping around different breweries tasting the different beers. A family favorite is Stone Brewery in Escondido in the next town over from where I grew up. My parents loved that brewery so much, they even donated money to help build the new location and have their own special stone built into a wall.

Germany also doesn’t have massive ass lifted trucks driving all over town riding people up the butt if they aren’t driving fast enough. I sure miss the hilarity of seeing how high someone could raise their truck and plop big ass tires on their car. Nothing like being followed by a truck that belongs in the rink of a Monster Truck Show. Germans just cant understand why people need big trucks like these and they are definitely not necessary in Germany where the streets are small and parking spaces are smaller and limited.

I grew up going to more baseball games than anything else in my life. My parents had season tickets to the San Diego Padres baseball games and we went to between 60-70 games per season. There is definitely a hole in my life where sports used to dominate a good portion of my life. Regensburg has a baseball team and we have been to a few games, but it just isn’t the same as the big leagues. We went so often, we met many of the baseball players.

23. The Endless Expanse of City Lights

One thing I really miss the most about California, is flying over it and seeing the endless expanse of city lights that light up the night.

I sure do miss home though! There will never be home like California, but I can sure take it with me wherever I go!

Check out other California related posts!

Replies to 23 Things You Will Miss About California (US)