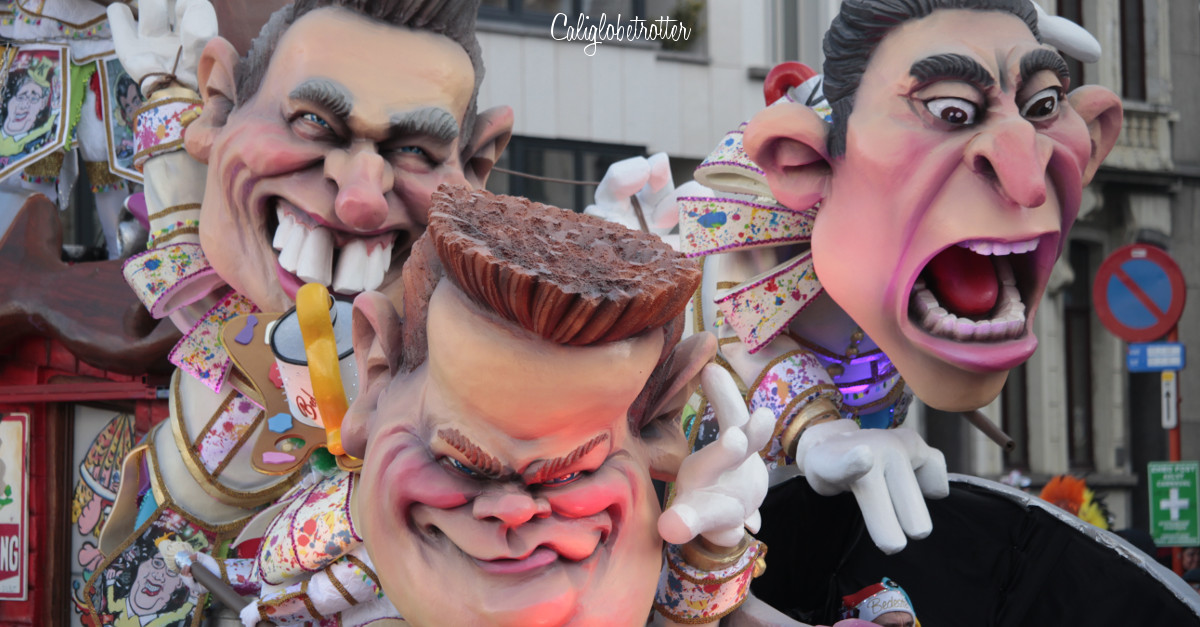 Not far from Ghent, is the town of Aalst which is practically unheard of beyond Belgium, but within, it is renowned for having a yearly three-day, 600 year old Carnaval. Recognized by UNESCO as a Masterpiece of the Oral and Intangible Heritage of Humanity, this event deserves all the attention it can possibly muster as being a three day festival of debauchery! Plus, it might possibly be the best kept secret in Europe!

Want to Experience a Wacky Carnival? PIN IT FOR LATER!! 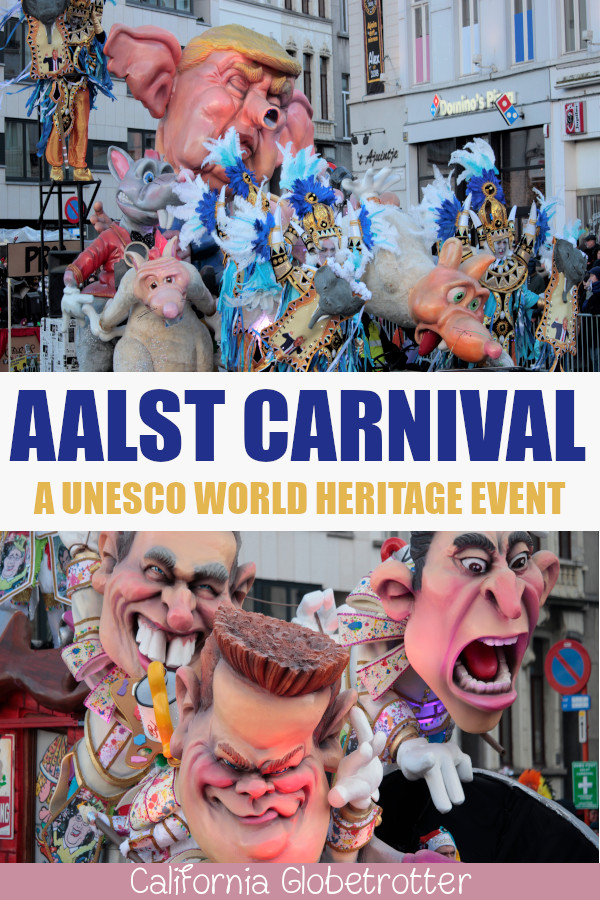 Coming from the US, I had only ever heard of the big three Carnival festivals: New Orleans’s Mardi Gras, Rio de Janiero’s Carnival and the masked Carnival in Venice. Then, in 2007 when I studied abroad in Heidelberg, I discovered that there are tons of Carnaval parades in Europe, even in Germany. Köln (Cologne) is by far the most famous carnival in Germany known as “Crazy Days”, and every year, I have stomped my feet and said, “I want to go!!” and every year, my husband just shook his head in dismay like I was crazy. People always said, you don’t want to go there during Carnaval because it’s absolute chaos, so, needless to say we’ve never gone. We’ve celebrated in a nearby town on a much, much smaller scale to watch a Faschings Parade, but for me, it was never enough. I’ve always wanted to visit a REAL carnival! So, when David from Travelsewhere wrote about the surreal carnival experience he had in Belgium, I knew this was the one for me! This year, I stomped my feet and said “I want to go to Aalst for Carnaval” and I was completely shocked, when for once, my husband finally said “YES!” Epically exciting, yet not even a fraction of the crowds that Cologne is bound to have. 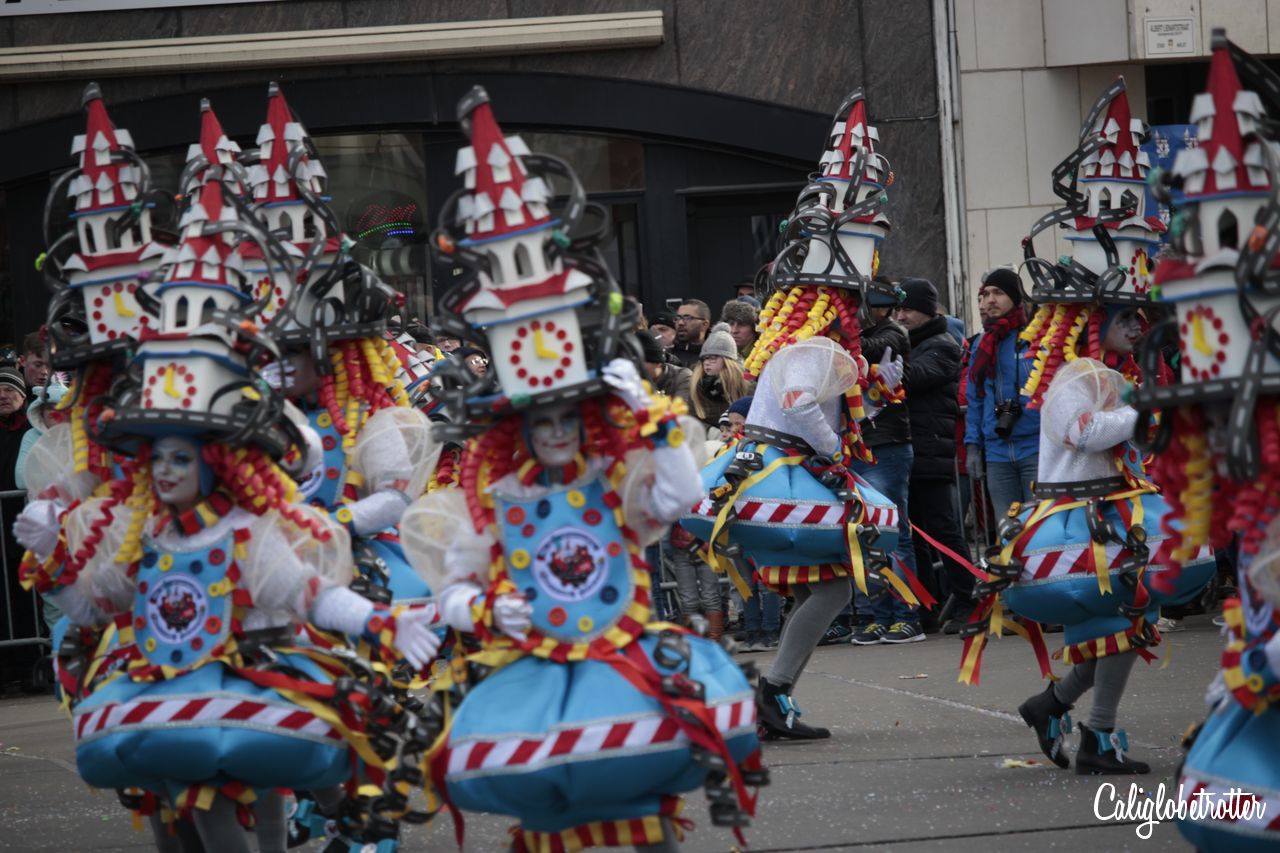 The Aalst Carnaval, or Carnaval Oilsjt, dates back well to the Middle Ages and 2018 celebrated the 95th celebration of the parade. While the Carnaval itself is 600+ years old, parades have taken place since 1851, but without any organization by the city. Finally in 1923, the city council officially organized the parade and today is one of two major Carnavals in Belgium with the other being in Binche in Western Wallonia.

While the tradition has died out in other cities like Brussels and Antwerp, the tradition is very much alive and well with some 2,500 people participating in the parade while around 80,000 spectators have been known to line the streets to watch the parade and party through the night! 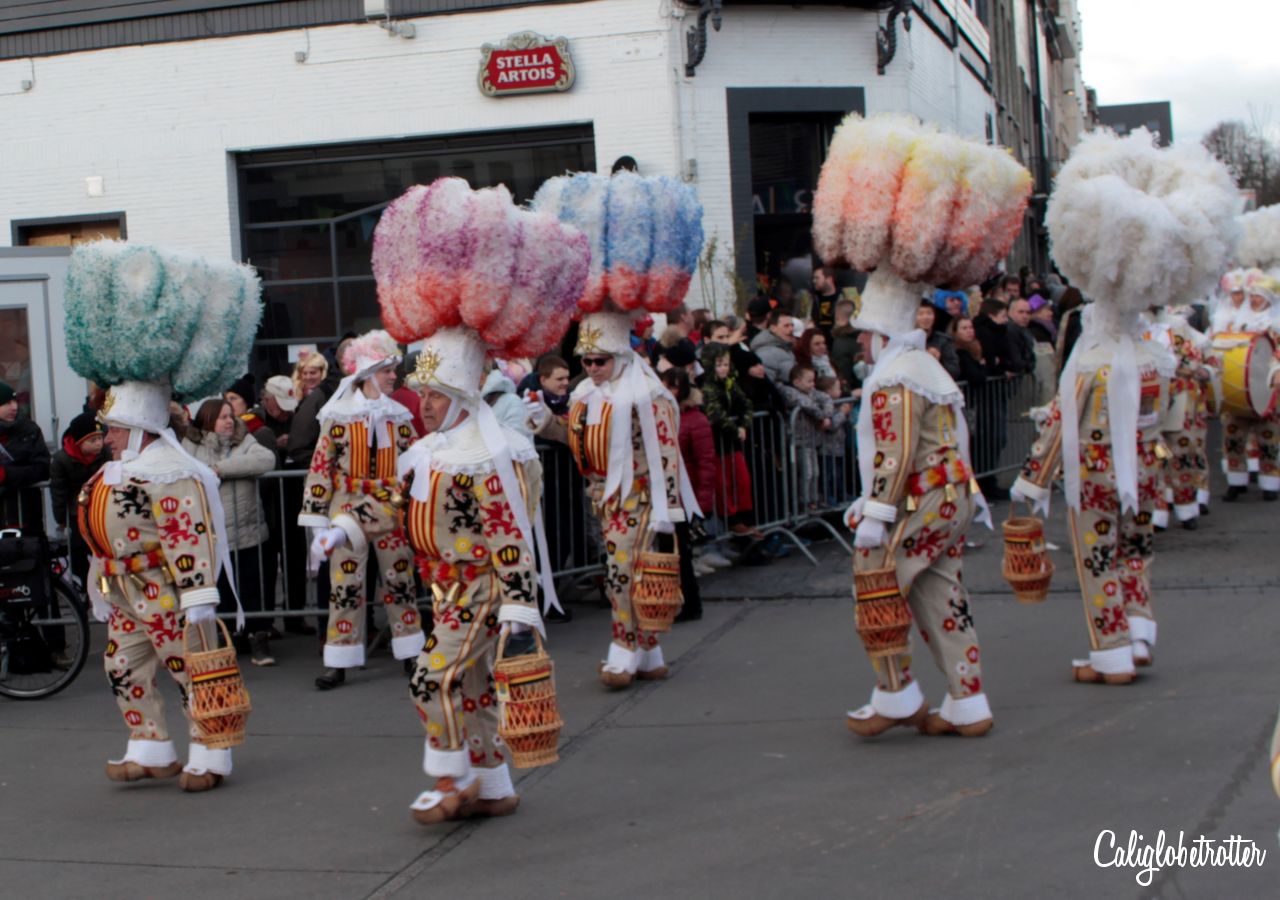 
Beginning on the Sunday of Shrovetide and lasting until the night of Shrove Tuesday, the Aalst Carnaval is three-days of utter debauchery. Festivities begin on Saturday with an exuberant and satirical ceremony in the Grote Markt with the city mayor temporarily handing the keys to the city to the pre-elected Prince Carnaval for the duration of the festival. A fierce competition to become Prince Carnival requires year round campaigning and attending many fundraisers held by the participating groups.

Sunday is the beginning of the three days of madness with each day having their own program of events all centered around a daily parade which meanders through the town for 7km. The parade takes place on both Sunday and Monday with floats ranging in themes and caricatures. Pretty much anything goes, as long as it’s not illegal!

Besides that, there is a yearly Broom Dance by the Gilles of Aalst symbolizing the removal of evil spirits out of the city. Little brooms are thrown out to the public as a good luck charm. Afterwards, there is an “Onion Throwing Event” where the Prince Carnaval and members of the committee throw onions from the city hall balcony. 100 onions are filled with a prize, while only ONE 18 carat golden onion, embedded with jewels is worth €1200. Every year, a new designer has the opportunity to design the golden onion, making each and every one unique! “But I want my own ONION!” (Name the movie reference!)

Over 100 wagons, 80 official and 208 smaller and unofficial groups participate in the parade which lasts from around 1pm to late into the night. Groups are split into small, medium and large categories of which more than 2/3 of the participants are local groups. Each group is judged and scored with the winner being announced Monday evening. While most floats are funny in nature, some are more political and controversial as the Carnaval season is a time to publicly criticize politicians and other popular topics of the year.

Tuesday, the Stoet van de Voil Jeanetten  (“Parade of the Dirty Sissies“) portion of the Carnaval takes place where men wearing women’s clothing, fake breasts, corsets and more walk through the city, much to the delight of everyone. This part of the festival originates from the history of Aalst, as lower class citizens were too poor to make or buy costumes and therefore, got creative with old and tattered clothing from their wives.

At the end of the night, an effigy in costume is lit on fire by the Prince Carnaval signaling the end of the Carnaval festivities, thought to date back to pagan times and to represent the burning of the spirit of winter. 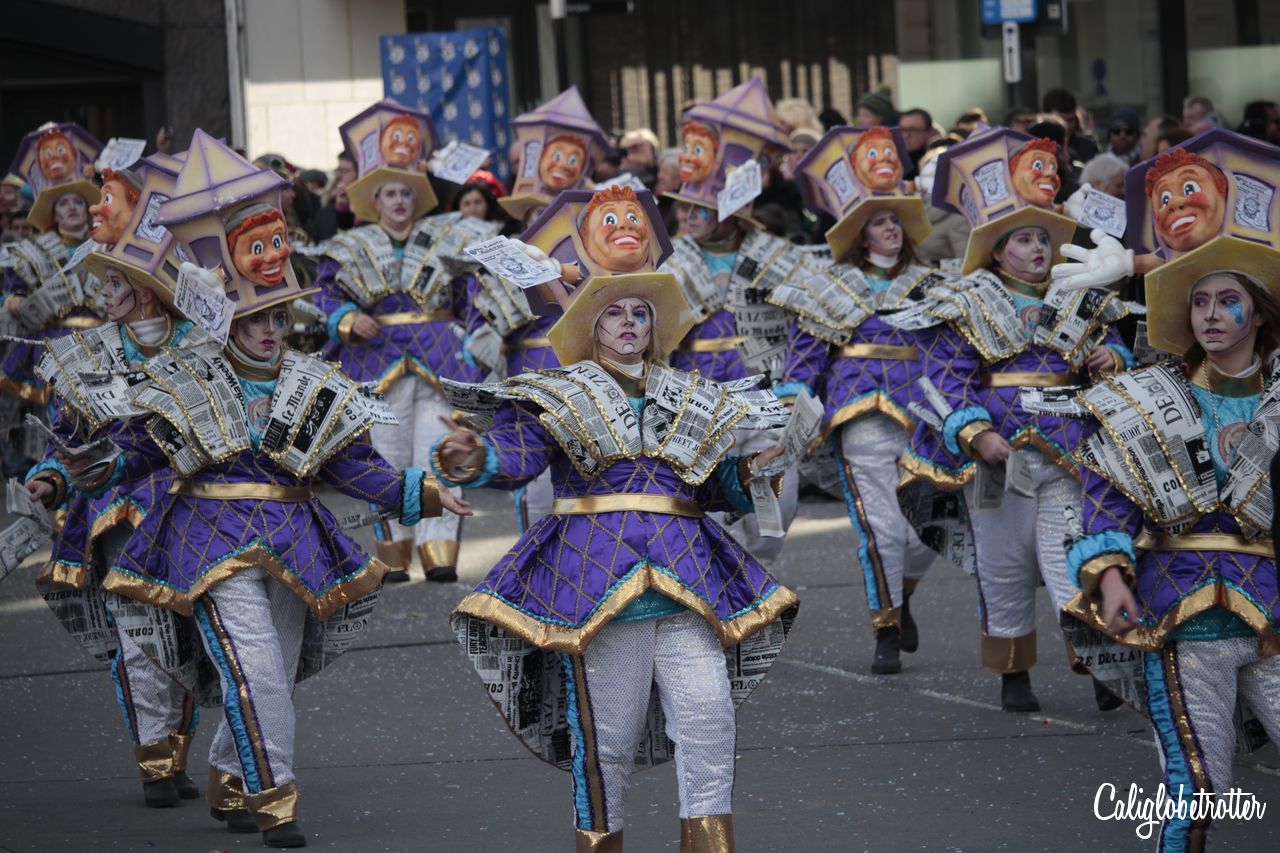 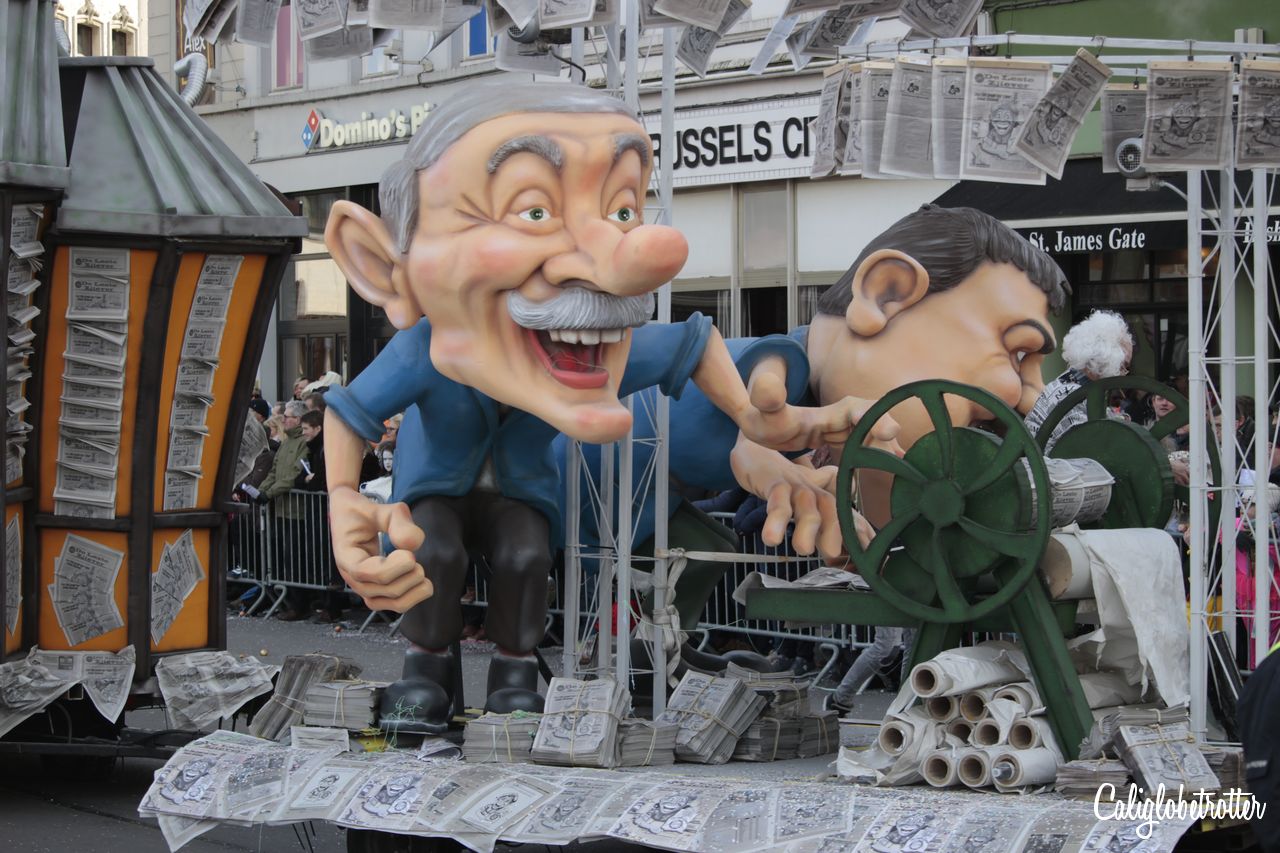 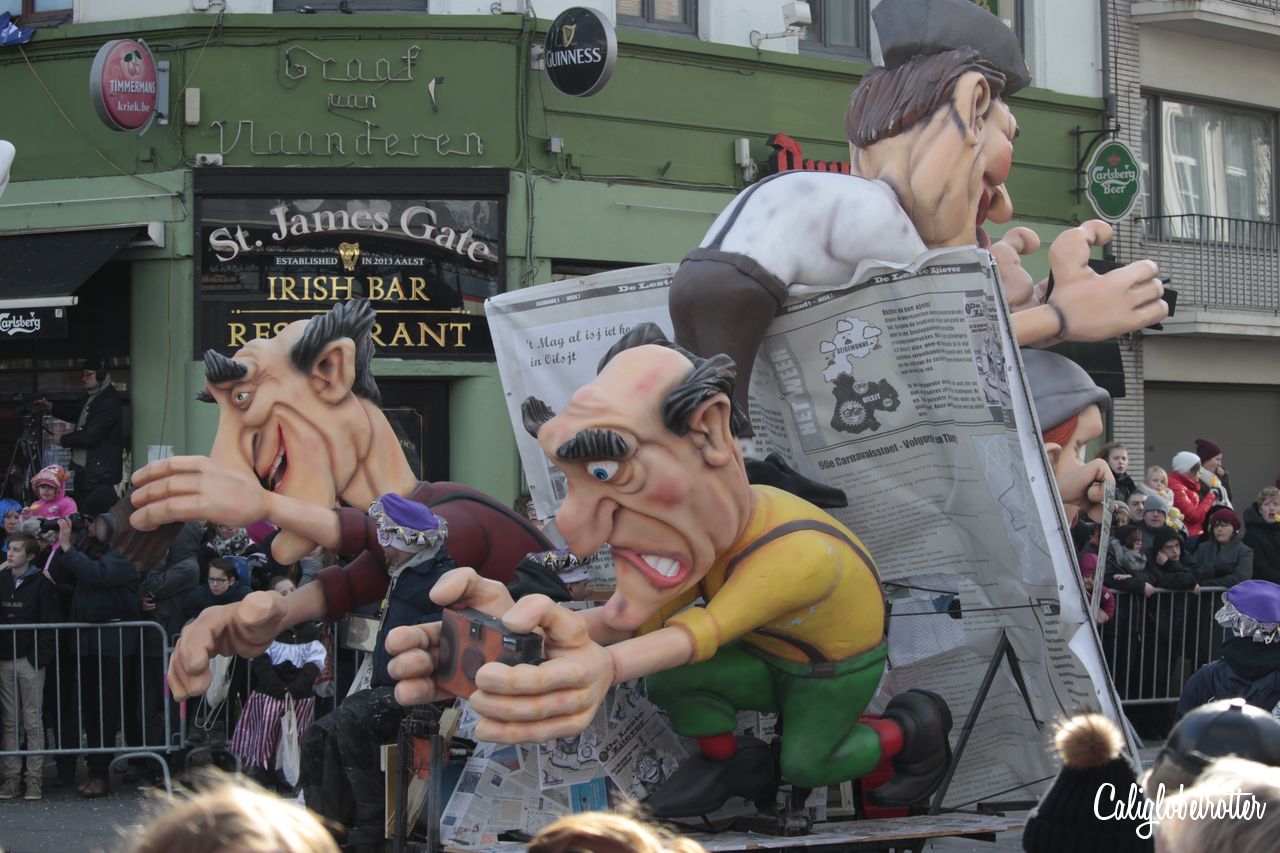 While the Aalst Carnaval might feel more like something out of Willy Wonka and the Chocolate Factory with their vibrant and candy-like, fantasy costumes, the tradition of Carnaval is always associated with a side of political commentary and criticism. Nothing is sacred and everything goes and everyone must learn to take it with a grain of salt. Floats range from religion, race, and politics concerning local and world events from the year but are predominately about the city of Aalst’s politics, therefore, a good portion of the political satire was lost on me.

Unfortunately, Trump is a popular figure as he has made it so easy to to get a good laugh at which can be found at any and all Carnavals throughout Europe, plus North Korea, the Russian dopping scandal and the ex-Catalonian President.

A big thanks to a local who told me the float below actually refers to two Dutch sayings which are similar to “a bull in a china shop” – Als een olifant n de porseleinkast” and “van een mug een olifant maken” meaning “making an elephant out of a mosquito”. 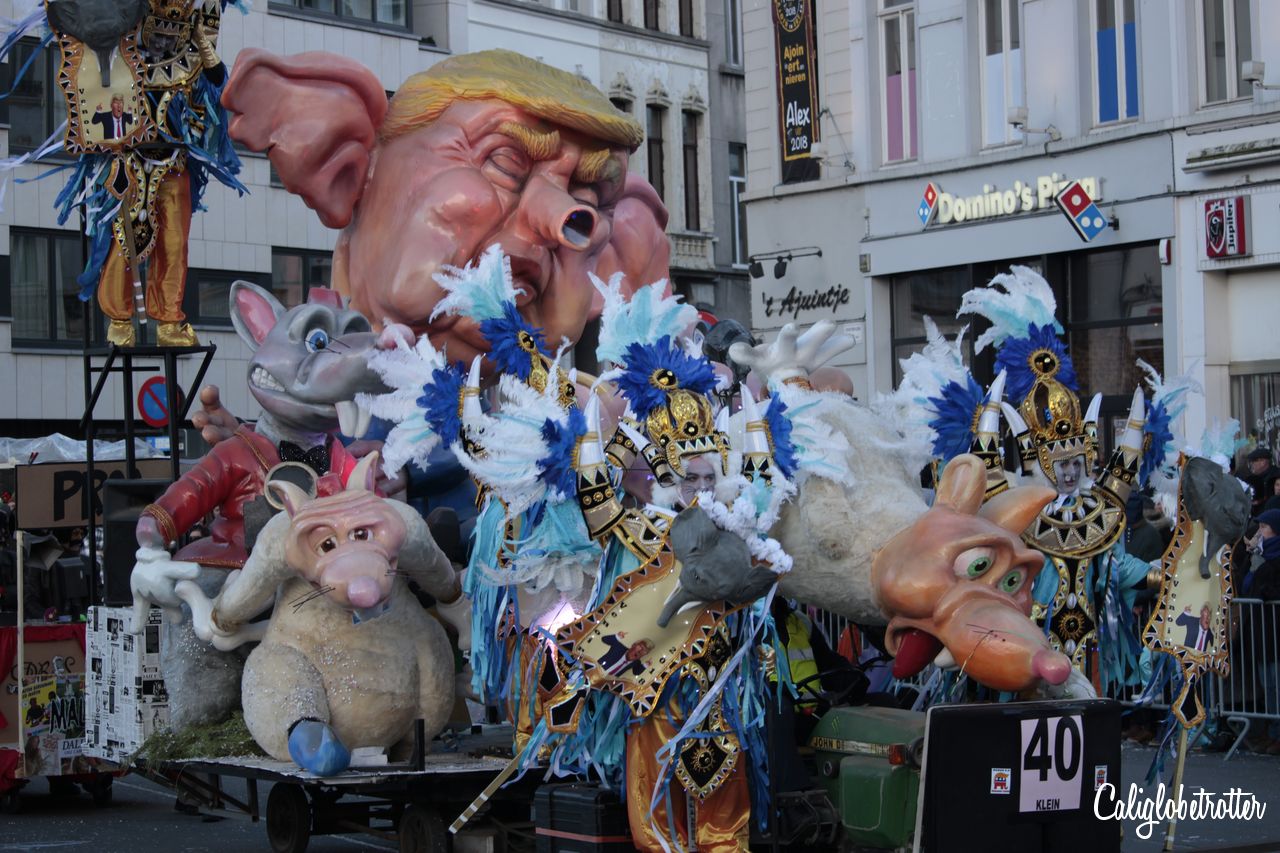 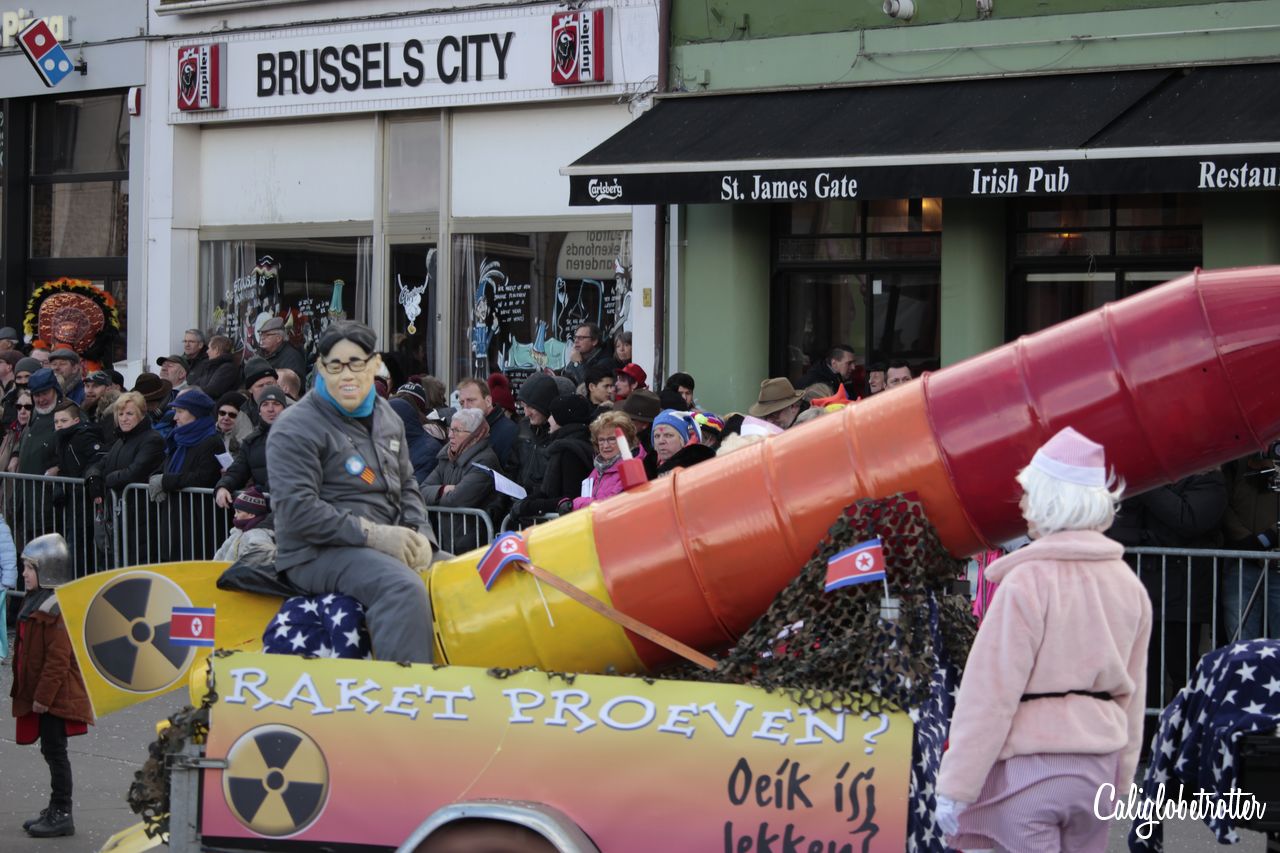 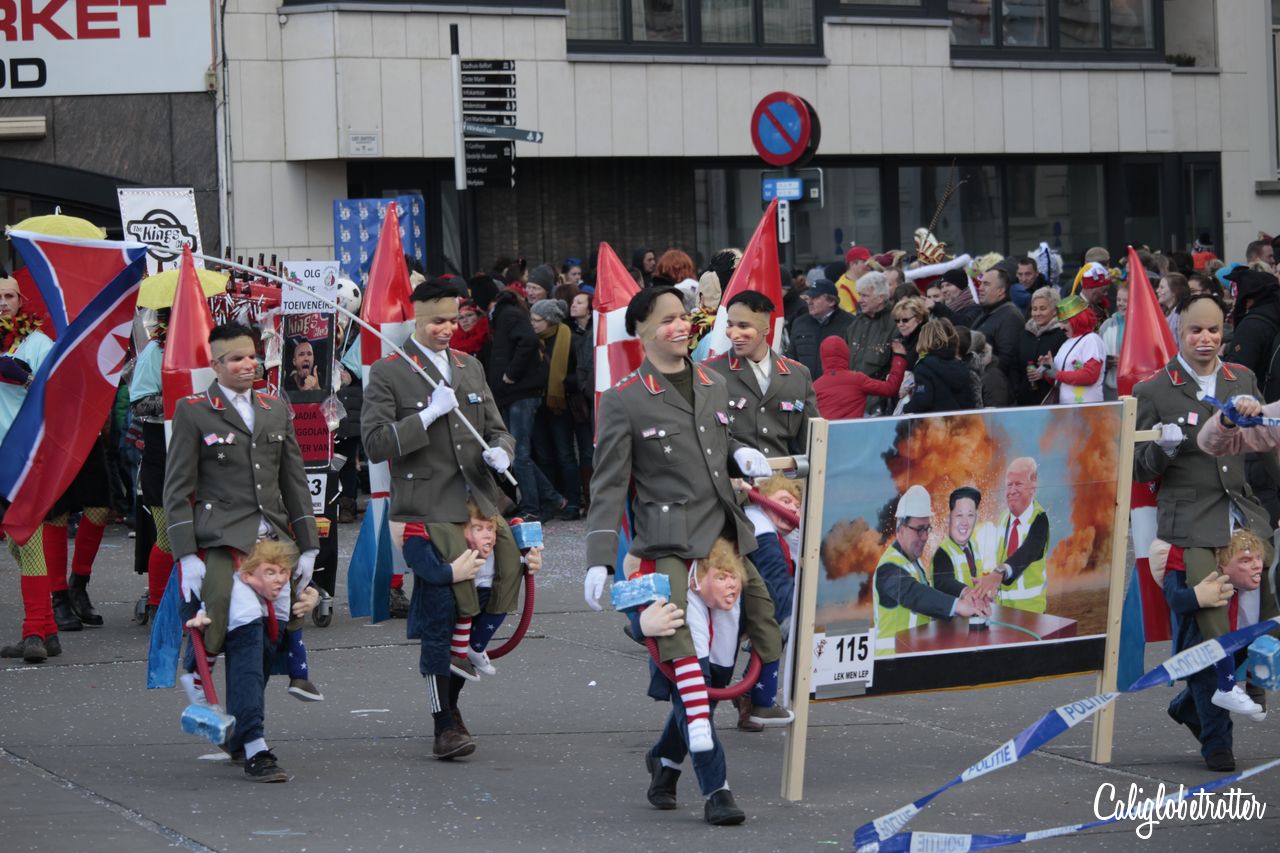 What’s with all the onions?

If you don’t see any onions in Aalst, then clearly you’re in the wrong town! The onion is the mascot of the city, a satirical name given to the citizens of Aalst (called Aalstenaars) because of the way they would say “Oh yes”. In their dialect, they would say “Ah join” and when pronounced, sounds like the Flemish word for onion, as well as for the large number of onion fields which once surrounded the region. Today, locals embrace their stinky nickname with good humor! 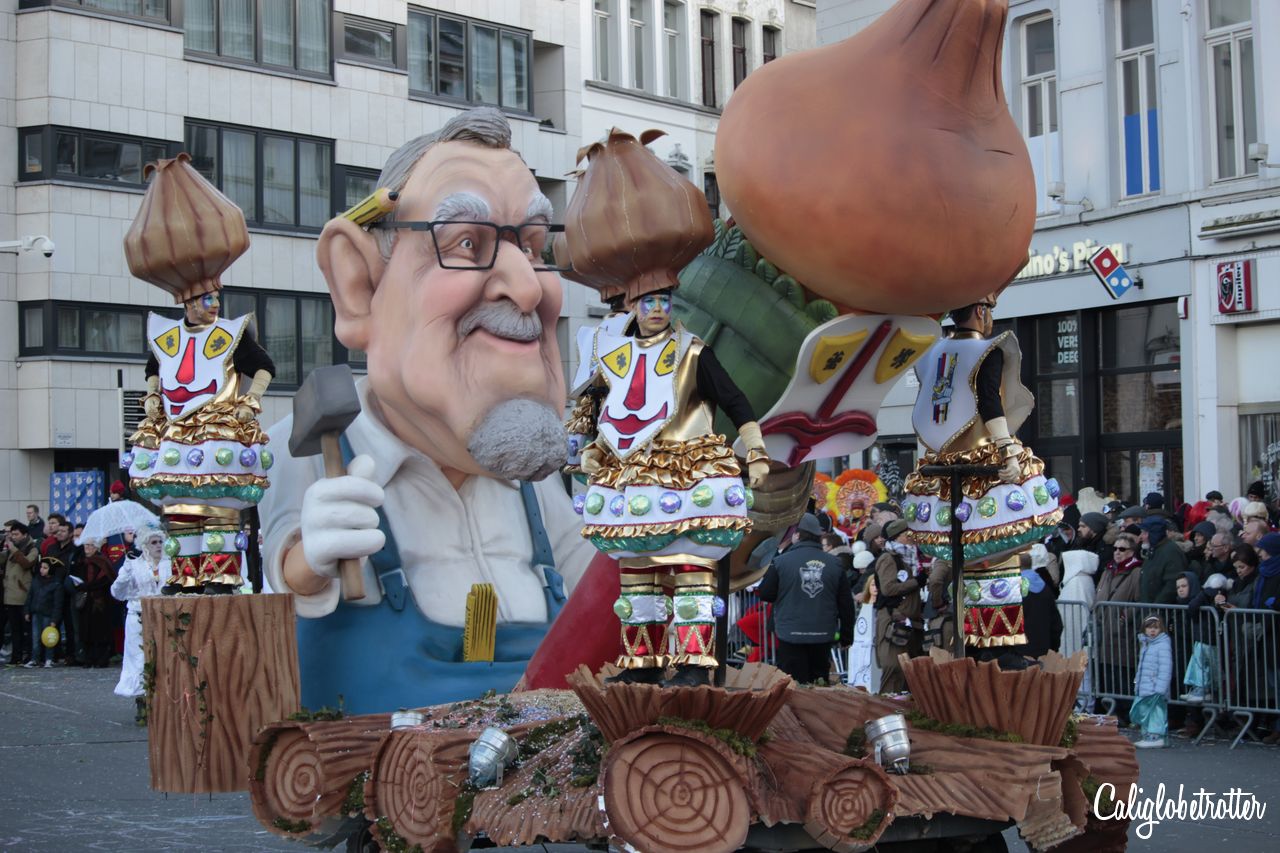 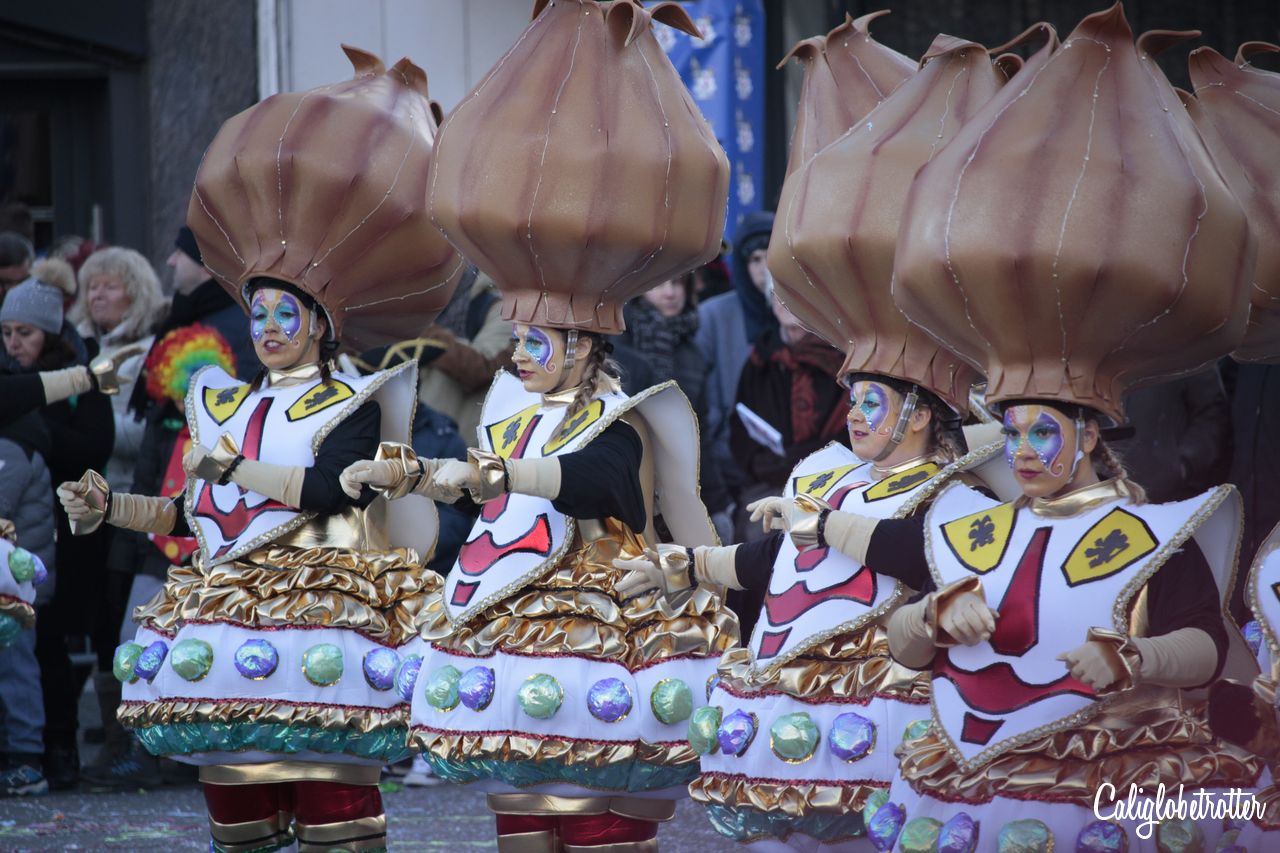 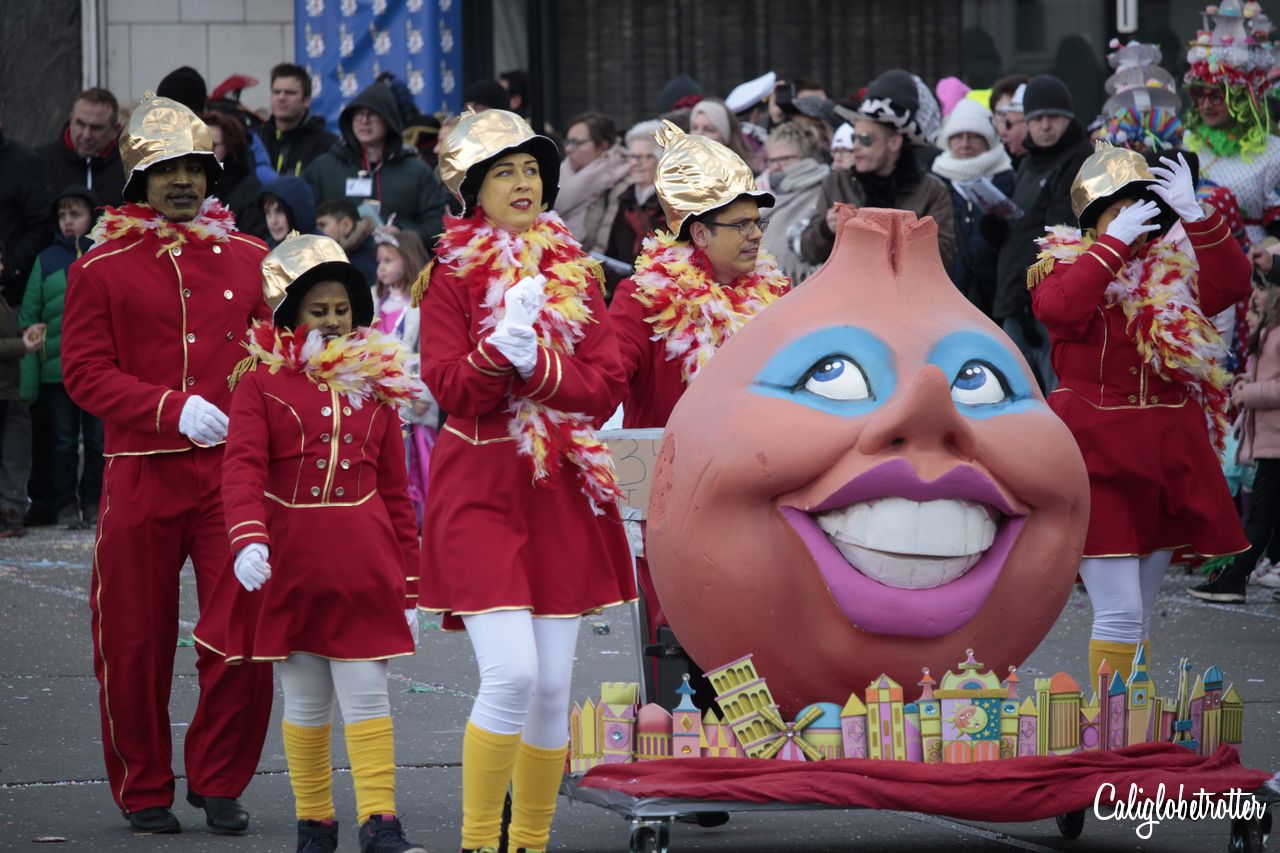 I don’t know what I was more impressed with, the costumes or the floats! I have never ever been to such a street parade before in all my life, unless you count Disneyland. For each float, there were 10-30 people dancing, twirling and singing along to music specifically for their float, either in front of, on or behind the float. They intricately danced down the street in their unique and crazy costumes or tossed out candy and confetti. Each float only seemed to multiply in size and impressiveness. Some floats were snake-like with 4-5 wagons trailing behind. Some floats were interactive while others had impressive mechanics. I absolutely adored every costumes and float and couldn’t possibly pick a favorite! 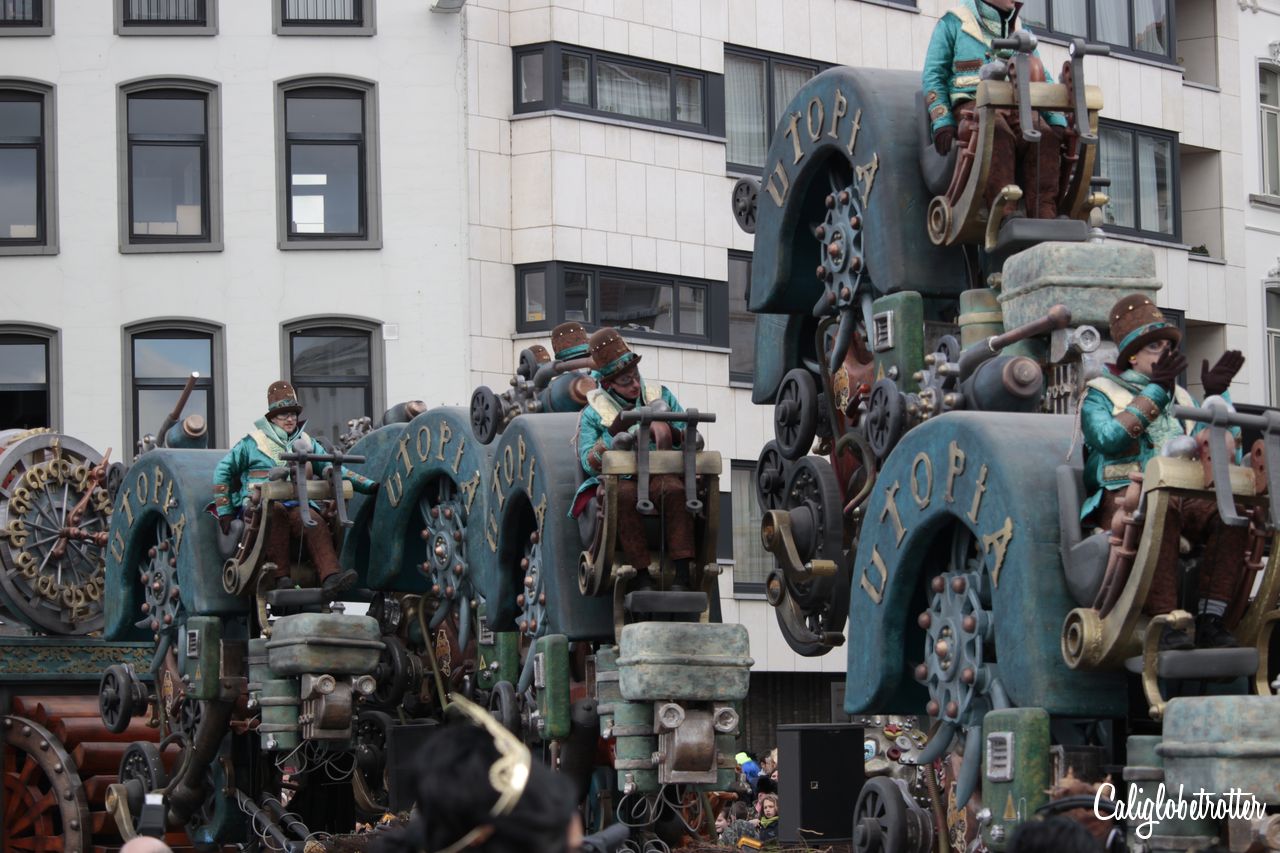 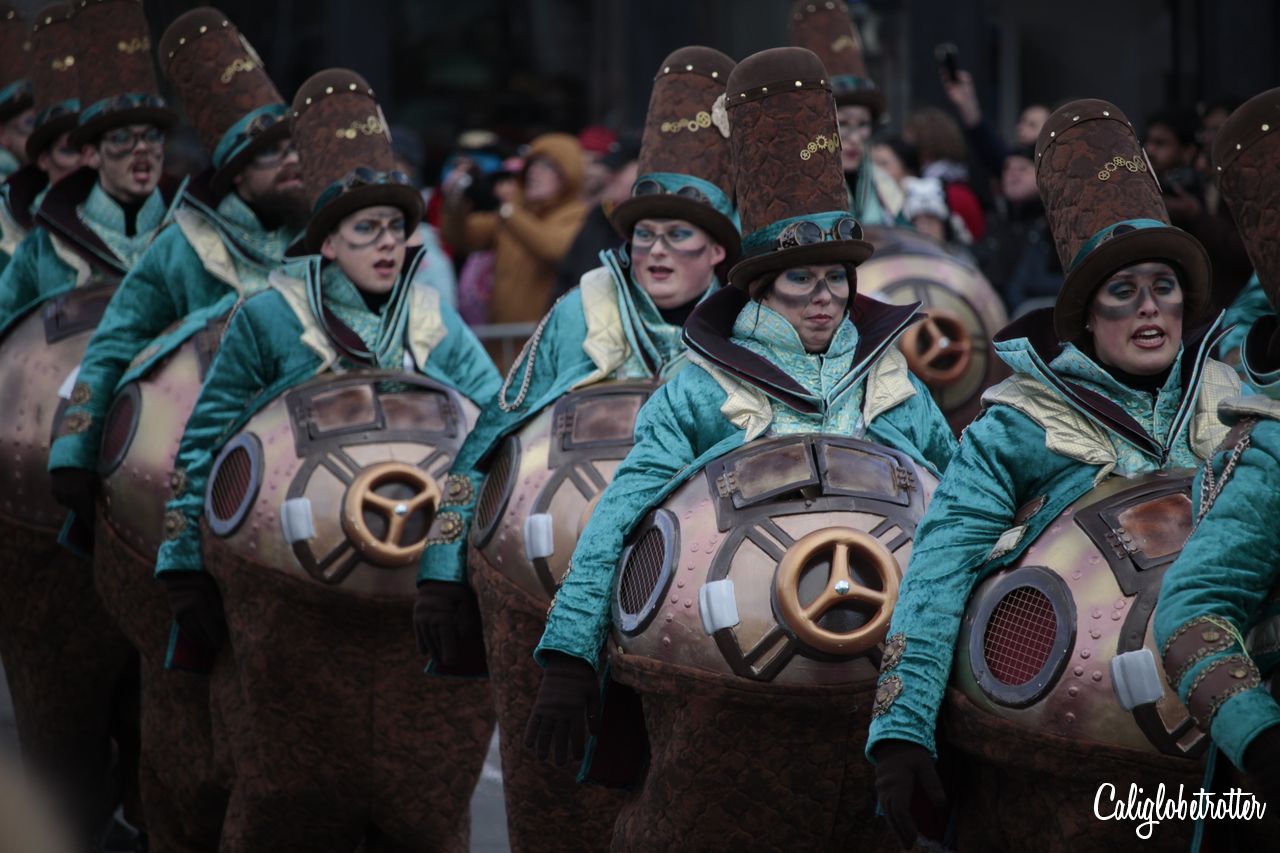 While you might get tired standing around all day watching a parade, it would be a real shame if you didn’t at least stick around for the evening show as the best have been saved for last! Participants and floats are able to spice up their costumes and floats by adding a plethora of twinkling lights and neon lights, taking the parade a notch higher than anywhere else you might have seen before! It’s worth sticking around for! Unfortunately, we didn’t manage to have time for this, but saw plenty of pictures!

You would be wrong to think that just because the sun has set on a gloomy day which already saw dozens of flats parade by, that it might eventually come to an end. Not even in the slightest. At the end of each night, old firetrucks become loud speakers and the town parties until the break of dawn. Lyrics range from the Aalst Caarnival to crass behavior and dancing as ridiculous as possible, with or without skill is highly recommended for a good time! It’s a time where again, anything goes and things that would otherwise be considered taboo is completely allowed.

While the Aalst Carnaval might not me one of the top 5 carnivals in the world, it is certainly one of the most amazing carnivals in Europe! For each Carnival float, there was a group of coordinated dancers with mind-blowing, unique costumes who actively looked like they were enjoying this event! I have been to other carnivals on a way smaller scale and the participants mostly walked down the street, with drinks in their hands and occasionally singing, dancing or throwing out candy. This was wayyyy more entertaining and we managed to stick around and watch about 5 hours worth of the parade, only to realize we hadn’t even seen a fraction of the 200+ floats!

Sadly, much of the political satire was lost on me as it was predominately about Belgian politics, but there were quite a few referring to Donald Trump #45, North Korea, the ex-Catalonian President who fled to Belgium as well as a few about the #MeToo movement. Surprisingly though, nothing about Brexit or Theresa May which is a popular theme at the Cologne Carnival.

As my second Belgian festival, all I have to say is that the Belgians definitely know how to put on a good time and this seriously might be the best carnival ever! 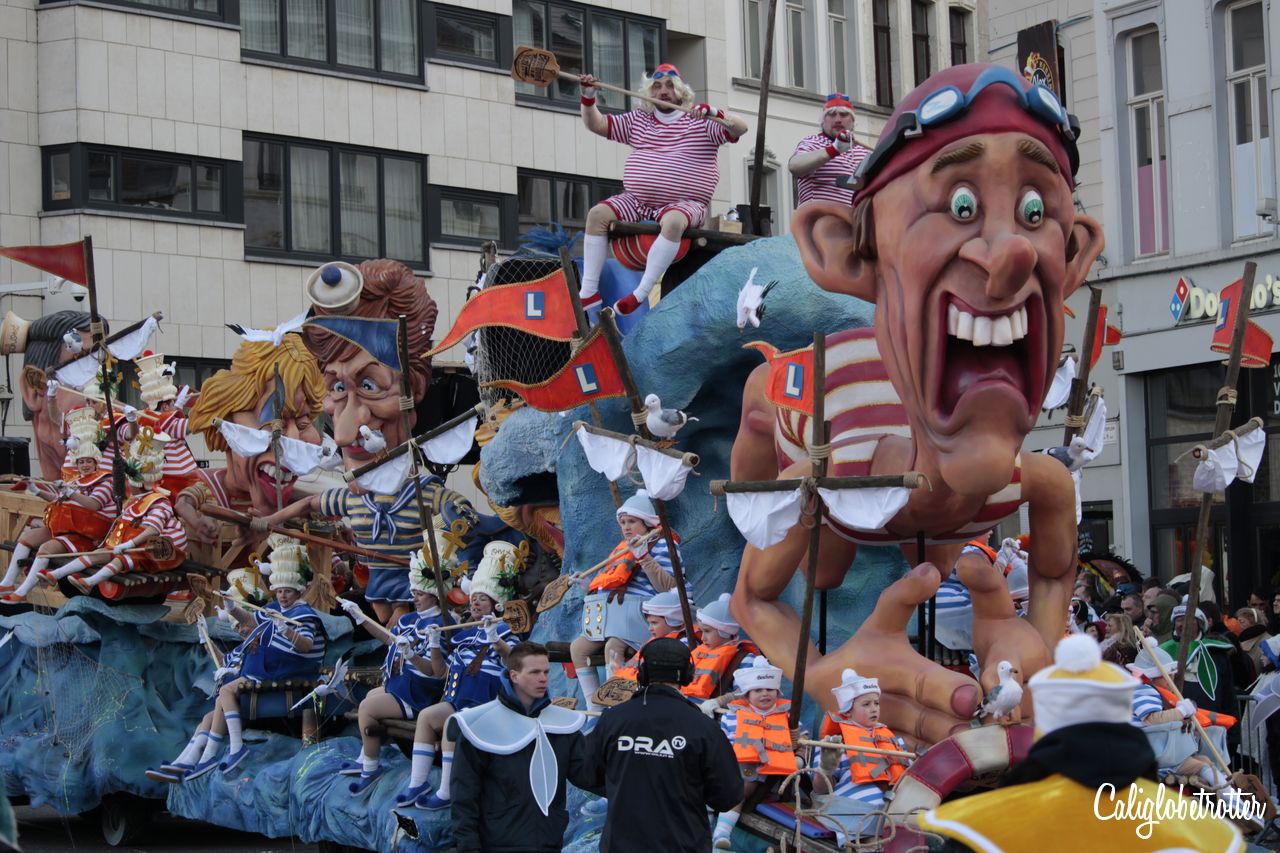 Other Festival Related Posts in Europe:

Replies to 3 Days of Debauchery at the Aalst Carnaval!!

Right now everyone's looking for a place to cool d

❓❓How many of your trips have been a dream com