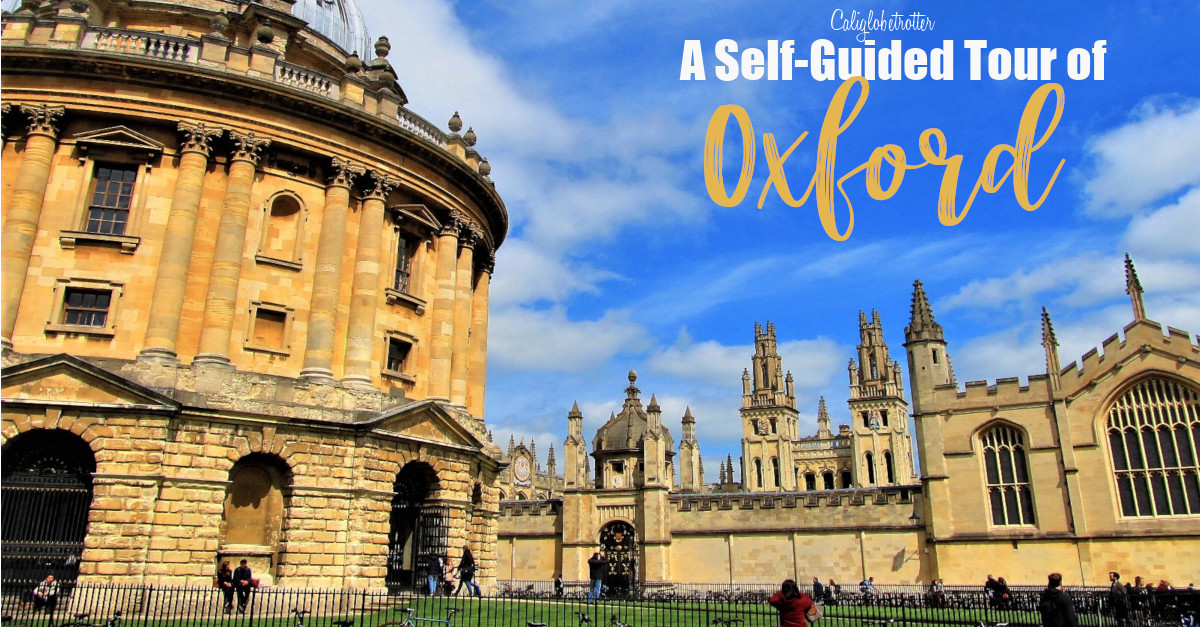 Just about an hour northwest from London is the small town of Oxford, known for having one of the best universities in the world. Only the best of the best study here. Founded in 1167 by scholars who came from France, it turned into England’s first university filled with spectacular spires dominating the skyline. It is also the oldest university in the English speaking world. While no one building dominates the city, there are nearly 1,000 buildings of architectural or historic interest all within one-square mile!

Want to Visit Oxford? PIN IT FOR LATER!!

Oxford is home to 20,000 students and are housed throughout the city. There are 36 different colleges and each one is unique and fiercely independent from others. Each college has a glorious history, traditions and customs those of us on the outside can only dream about! Many of them were founded by wealthy benefactors with good intentions. The oldest universities date back to between 1249 and 1264 making it an interesting day trip from London!

Getting around Oxford is quite unique and so easy, I wish all European cities would do this. If you are driving by car, it is best to park & ride! As you drive into town, there are signs posted everywhere leading you to park & ride parking lots. Super easy and way affordable, just park in any of the park & ride parking lots as you get close to the city! Then, hop on a bus for about 10 minutes which takes you directly into the city center! We took the bus pretty much to the center of town and got off at High Street & Cornmarket Street.

It is not recommended to drive into Oxford directly because there is limited parking, and it is better for the environment, architecture and people if everyone coming into town parked outside. So don’t even bother trying to go further into town.

Of all the times I have ever been to England, Oxford never made it on to my itinerary. This time though, I wanted to see a few new things. I was torn between visiting Oxford or Cambridge as both seemed equally beautiful, but we went with Oxford instead. I really didn’t take the time to research much before going so this was the kind of trip that was more a go and find out for yourself. Turns out, it was very interesting and I learned a few new things!

Right off the bat, around the corner from the information center, you come upon Oxford’s oldest surviving building. The Saxon Tower of St. Michael at the North Gate is 1,000 years old and was once part of the city walls. Make sure to take a gander up at the top of the tower!

Just round the bin, on the corner of Cornmarket & Queen Street, is the Carfax Tower. This tower is all that remains from a 13th century church and costs about £2.50 a person to climb to the top. We chose this tower to climb as it is pretty central and thought it would offer some amazing views of Oxford. Everywhere we go, we always have to climb at least one tower so that we can see the town from above! 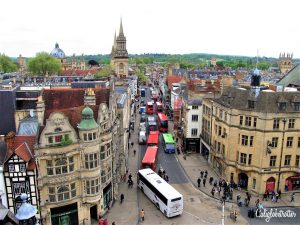 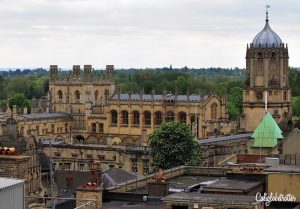 We then walked further south down St. Aldate’s and passed the Victorian Town Hall and the Museum of Oxford. We continued on until we reached the gates of the Christ Church College. We walked through the gates and towards the entrance of the Oxford College. This college serves as the only chapel college in the world which is a cathedral. If you’re not interested in paying to enter, you can simply walk through the lovely gardens. 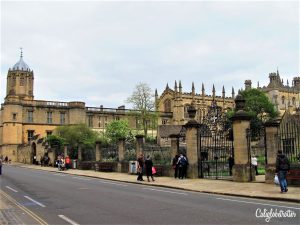 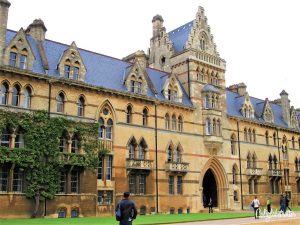 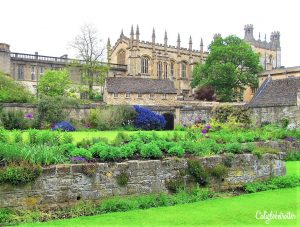 Upon arriving at the entrance, I learned that scenes from Harry Potter were filmed here. I’ve always been a HP fan, but over the years have swayed in my obsession, so needless to say, this is one of the best Harry Potter filming locations to see! In the first movie, when Professor McGonagall welcomes the first-year students, they are greeted in the 16th century staircase which leads to the Great Hall. The Great Hall was replicated in the studio for many scenes throughout the HP films! Upon learning this, I wanted to go in so badly! Unfortunately, students were in the process of taking exams and therefore, the Great Hall was not open to the public!

Deciding not to go in since we wouldn’t have been able to see everything, we continued on our walking tour, casually meandering past the Meadows on the right which lead down to the river. Along the way, we walked past but didn’t stop at the Botanical Gardens. It might look like there is nothing to do in this direction and I saw many people turn around, but it was such a lovely walk, so peaceful and beautiful! 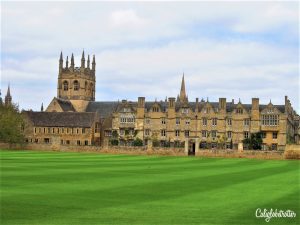 5. Magdalen College & Punting down the Thames

After reaching the main street again, we stood opposite from the Magdalen College. Just a short distance from here, before the bridge, you can rent a punt, usually rowed by students from the university. Just next to the college is the Magdalen Bridge where you can rent a self-drive or chauffeured boat. Every chance I get, I usually try to hop on some kind of boat, but unfortunately, I refused to pay £25 to go punting down the Thames. Traditionally college students chauffeur the boats.

6. The Bridge of Sighs

From here, we turned down a small alley to the side of Magdalen College and followed the adorable quaint and picturesque Queen’s Lane covered in beautiful purple Wisteria flowers, which eventually brought us to one of Oxford’s main attraction. Near New College, is the famous Bridge of Sighs, mistakenly thought to be a replica of the bridge in Venice. Also known as the Hertford Bridge, it was only built in 1914 to connect the old and new buildings of Hertford College. 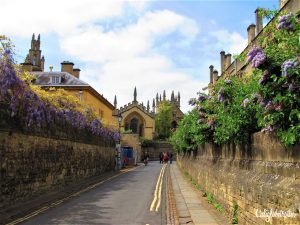 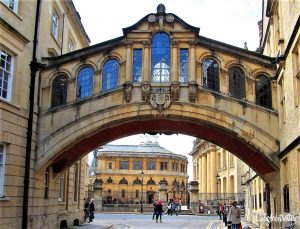 Naturally, I wanted to have a photograph taken of us. A young man and an older woman approached and I asked him to take a picture. When he was finished, I asked if they would like a picture taken as well. Only to be told that, “Ah, yes, well I live here. I go to university here.” Naturally. Why didn’t I see his air of sophistication before I asked him!?

Just behind the Hertford Bridge (Bridge of Sighs), is the Sheldonian Theatre, which was built in 1664. This building is mostly used for ceremonies and university lectures and is probably the highlight to all students graduating from Oxford.

Not far from here is another very popular iconic building from Oxford. The Radcliffe Camera was completed in 1749 and is now the home to the Bodleian Library. This outstanding library looks tiny but it houses 11 stories, mostly underground, houses over 100 miles of shelving and has a copy of every book ever published within the UK. It can take up to 6 hours (!!!) to retrieve a book to the reading room via its intense underground network of tunnels. 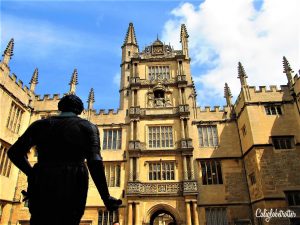 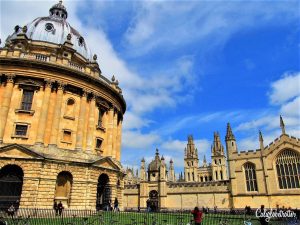 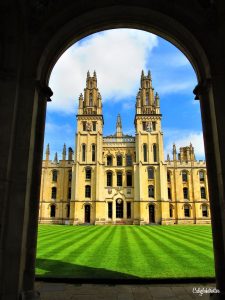 Directly behind the Radcliffe Camera is the University Church of St. Mary the Virgin. It is free to go in and outside, it is surrounded by café tables to stop and enjoy the view! Unfortunately, I did not realize this at the time, but you can climb up the tower and have some pretty amazing views of the iconic library! Check out this blogger’s experience! 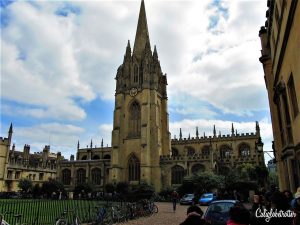 At the end of a small island of grass at the end of Broad Street, you’ll come across a spire memorial commemorating three Protestant martyrs – Latimer, Ridley and Cranmer who were all burned at the stake for heresy. While that thought is incredibly gruesome, the monument is quite unique to take a quick peak at. 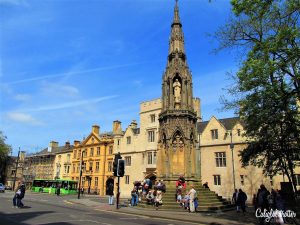 As we headed out of town, we quickly checked out the Oxford Castle Unlocked which is the remains of a partly Norman medieval castle! This castle is filled with history, tales of romance and even an ancient prison that was used up until 1996 and was reopened as a hotel! 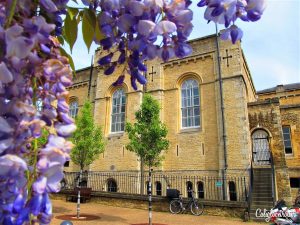 Nor far from Oxford are a few other tidbits which would be fun to visit! Unfortunately for me, it will have to wait until next time!

The Cotswolds: An Area of OUTSTANDING Natural Beauty 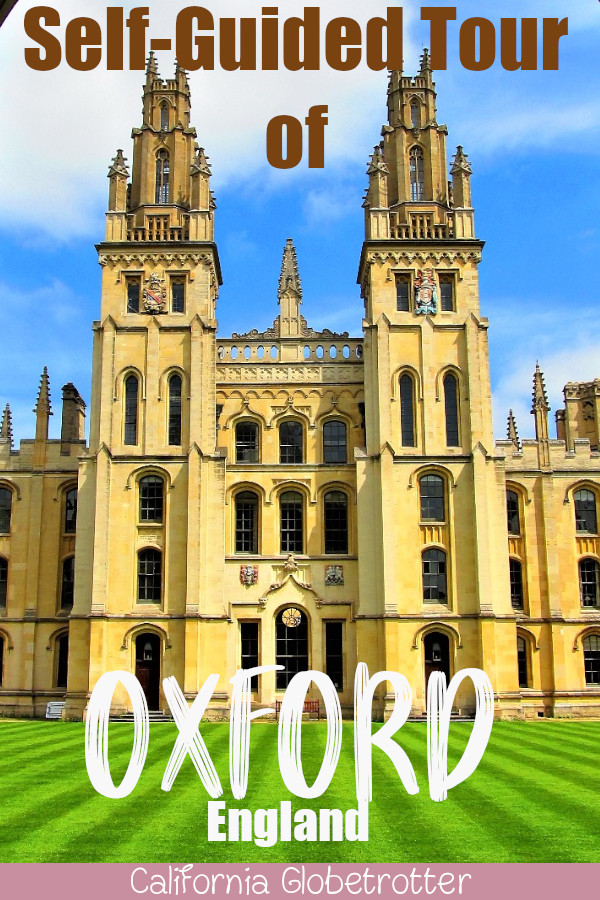 Replies to A Self-Guided Walking Tour of Oxford, England