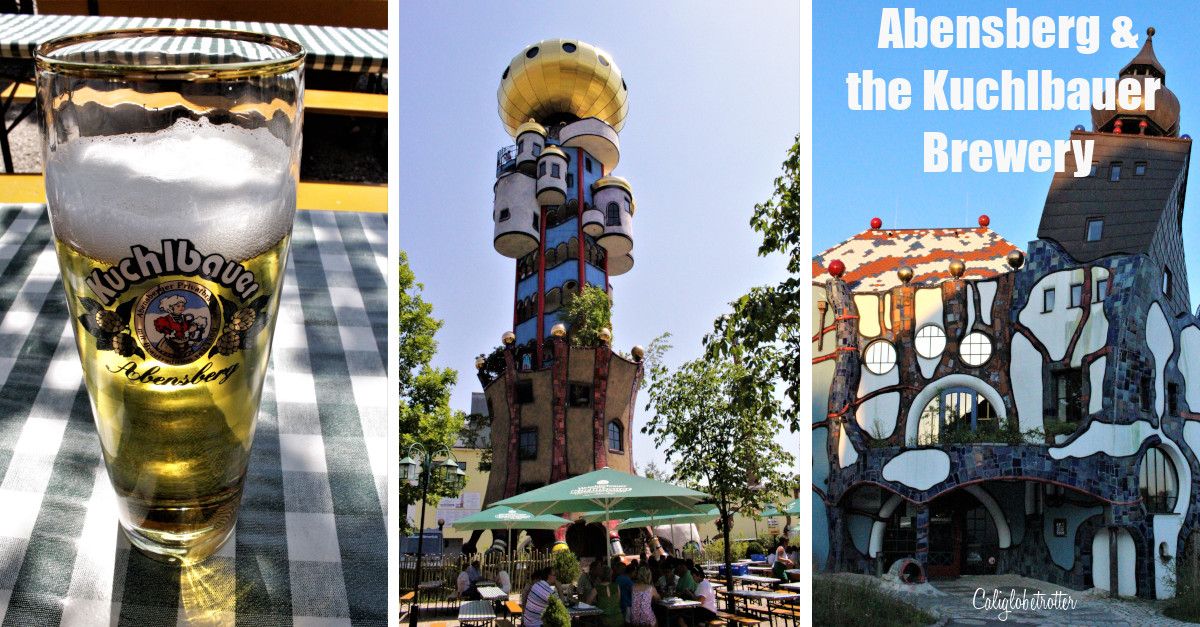 Just an easy day trip from Regensburg by car or by train, there is a small quaint village set among rows and rows of hops fields that sits along the Abens River. This region is the largest region for growing hops so it is no surprise, that set in the center of town is the Kuchlbauer Brewery which specializes in producing Hefeweizen beers. Founded way back in the 14th century, this brewery is among the world’s oldest breweries.

But this isn’t just any normal brewery!…

Love Breweries and Art? PIN IT FOR LATER!! 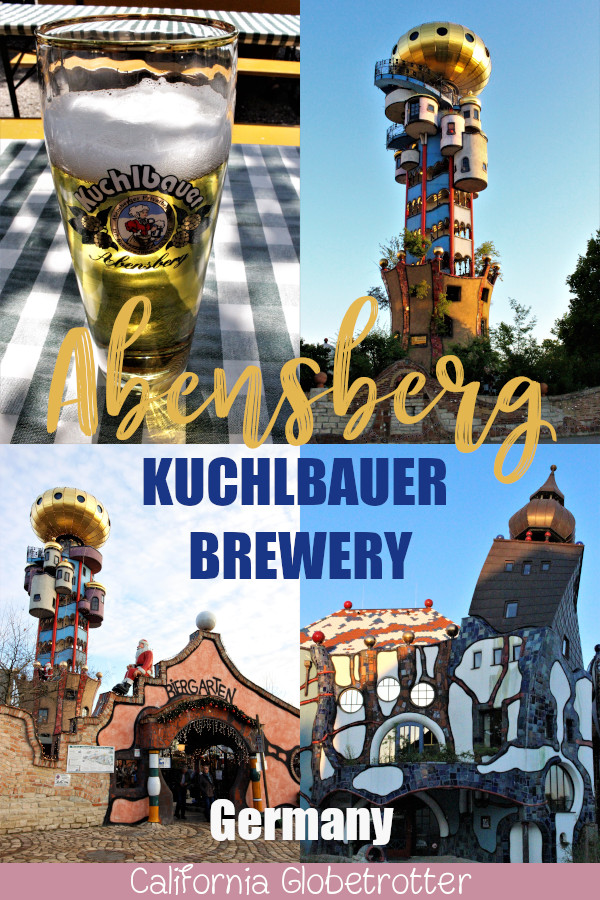 Looking for one of the best biergartens in Bavaria? Look no further than the biergarten at the Kuchlbauer Brewery which wraps around the base of the Friedrich Hundertwasser Tower. The beer is great, the atmosphere unique and the small village of Abensberg adorable! What more could you look for other than one of Germany’s secret spots to visit? 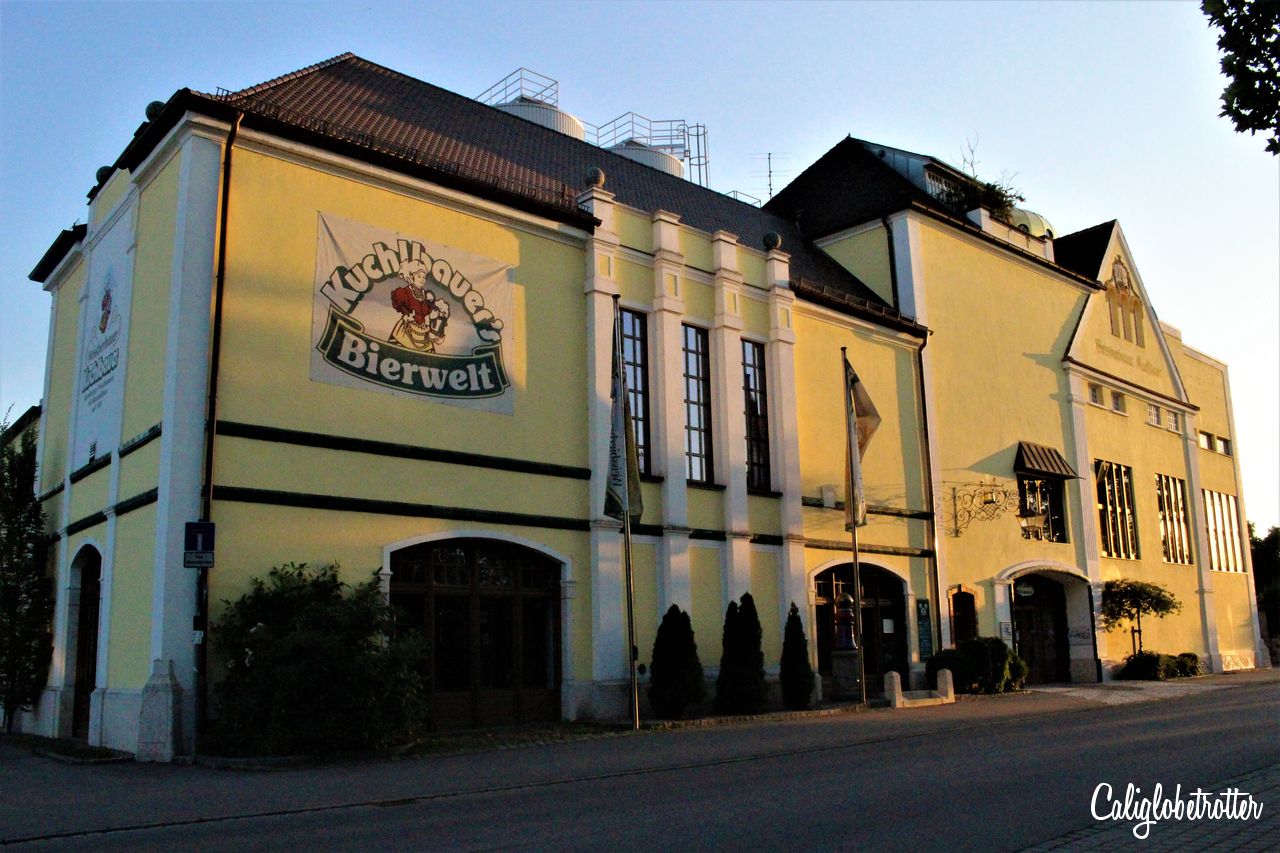 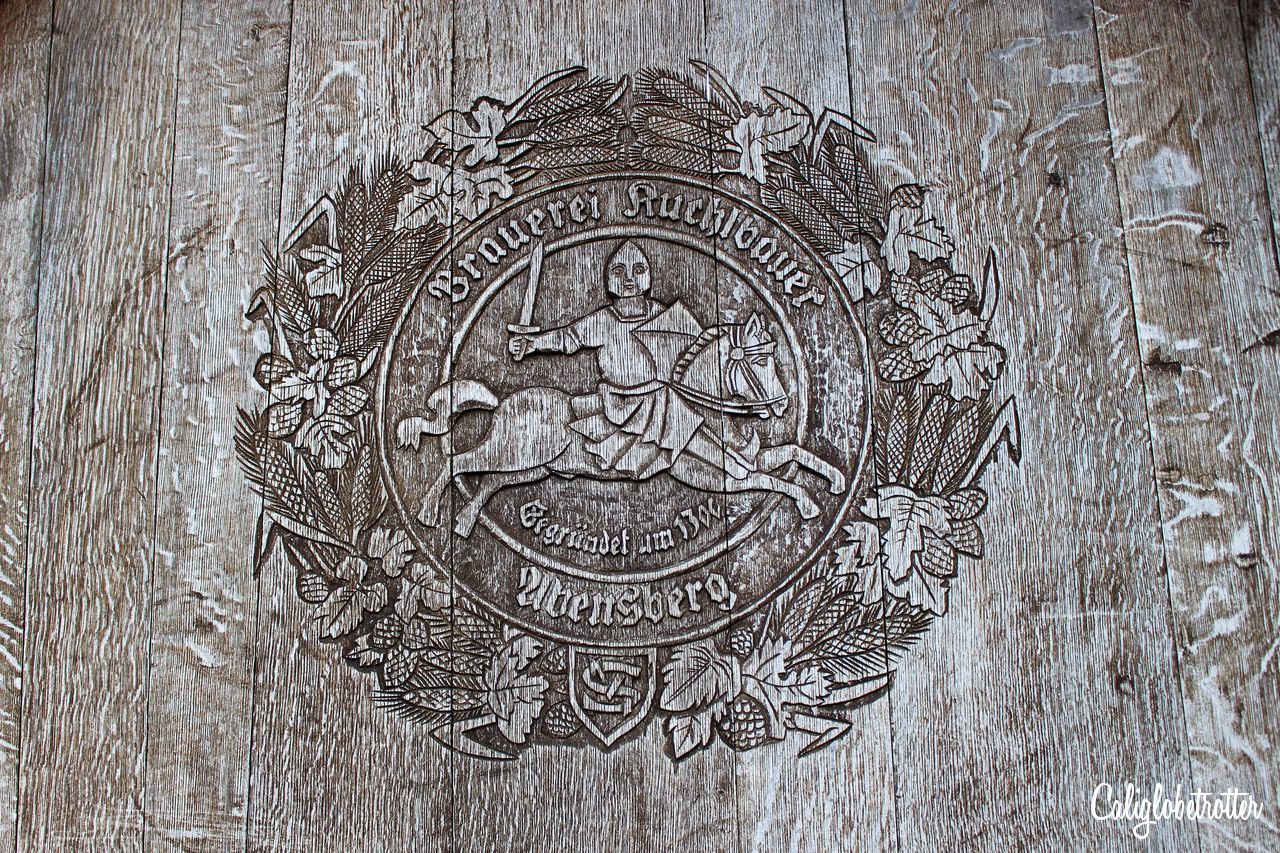 This little village is different from other little villages as it combines both historic buildings with new, modern architecture. Thanks to an artist from Vienna, Austria with a creative vision, Friedensreich Hundertwasser who came to this quiet little town and designed the now famous tower named after him, the Hundertwasserturm. Born as Friedrich Stowasser, he would later adopt the name Friedensreich Regentag Dunkelbunt Hundertwasser which translates to something more like “Peace-realm”, “Rainy Day”, “Darkly multi-colored”, “Hundred Water”.

Known for his interesting and unique artistic style, this observation tower which opened in 2010 has now come to be loved by beer lovers from far and near. Hundertwasser didn’t believe in creating straight lines so everything is curved or slanted. He also wanted to integrate nature and humans together, so wherever there was extra space, he filled it with plants. This town has stylistically combined beer and art, which presents the perfect combination to an enjoyable day strolling around.

With a large golden onion dome that weighs 12 metric tons, round rooms and wavy floors which wind around the tower, it can be seen throughout the town. Unfortunately, Hundertwasser did not live long enough to complete his artwork and the tower was finished under the direction of the owner of the brewery. Rumor has it that the tower is only half the size it was intended to be. Apparently, there had been some difficulties negotiating with the local government over the height of the tower. Had it been built taller, the tower would have been more easily seen for miles around. 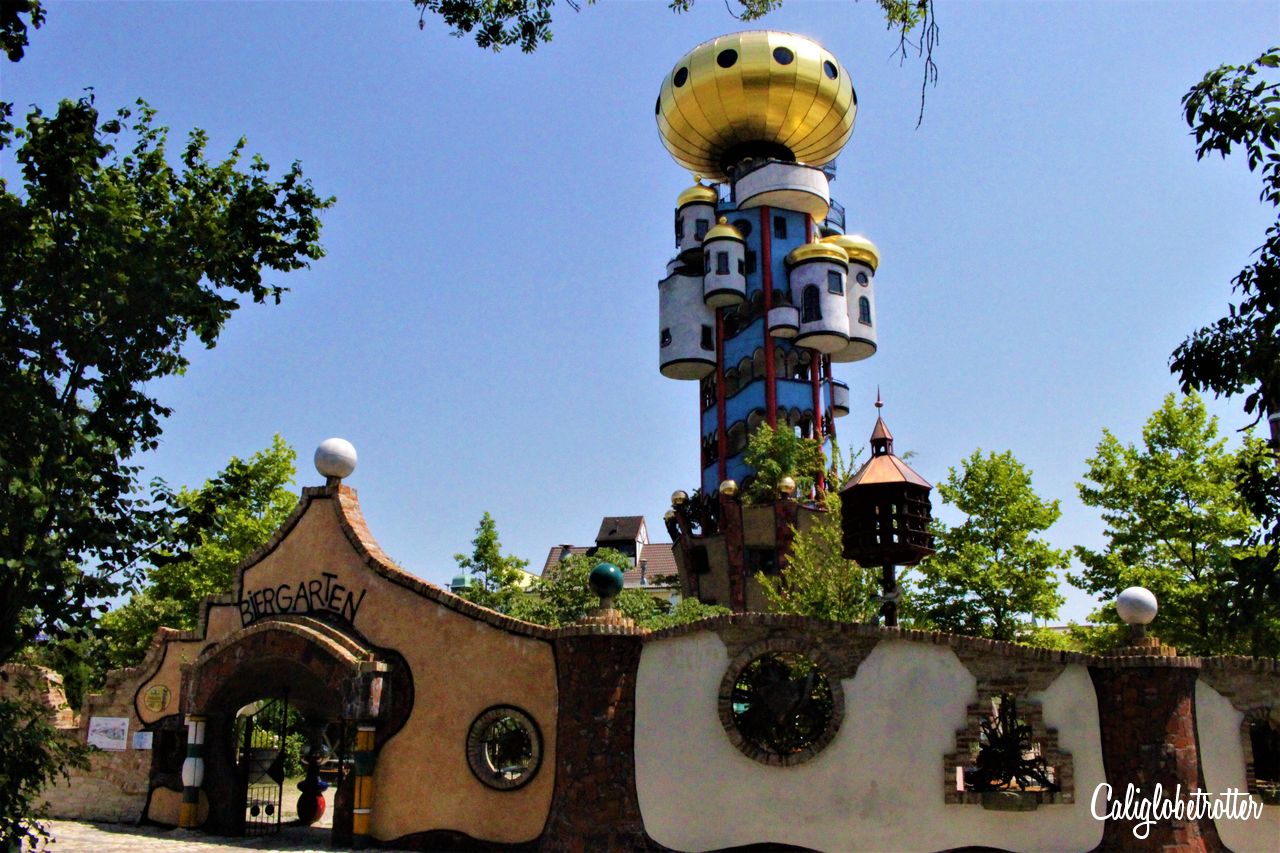 A view from the outside with the iconic front gate which states “Biergarten” will welcome you into the courtyard surrounding the Hundertwasserturm which during summer turns into a relaxing biergarten. Feel free to bring the little kiddies as they will be able to play to their hearts desires in this beer garden! By winter, the tables are gone and the Christmas market sets up around the tower and the brewery, with white lights lighting up the evening sky. I promise, it’s worth coming back for the Christmas Market!

Both the brewery and the tower are open to the public, however to walk to the top of the observation tour, you need to reserve a date for a two hour brewery tour. Not such a bad request is it? For 12€ per person and kids get in free, you will learn about the different themes of brewery, art and the tower on the tour. Along the way, you will learn more about the German Purity Law and how it applies to beers which are brewed throughout Germany. At the top of the tower, there is a collection of 4,200 Weissbier glasses, which is the world’s largest collection!

The Kuchlbauer Brewery offers tours in both German and English, however, unfortunately, English tours must be requested in advance. Possibly due to the lack of English tourists interested in taking the tour. However, if you can manage through a German tour or get lucky enough to catch an English tour, at the end you will be able to sample some of the Kuchlbauer’s famous Weissbier (wheat beer) and take home a Hundertwasserturm Weizen glass.

Just to the left of the brewery is another very interesting looking building, which looks more like a fantasy drawing from a Dr. Seuss book, however this Kunst Haus (Art House) is dedicated to the life of Friedensreich Hundertwasser and his artwork. Not only did he just design the Kuchlbauerturm, but also many other buildings throughout Austria, Germany and some even in the Netherlands! 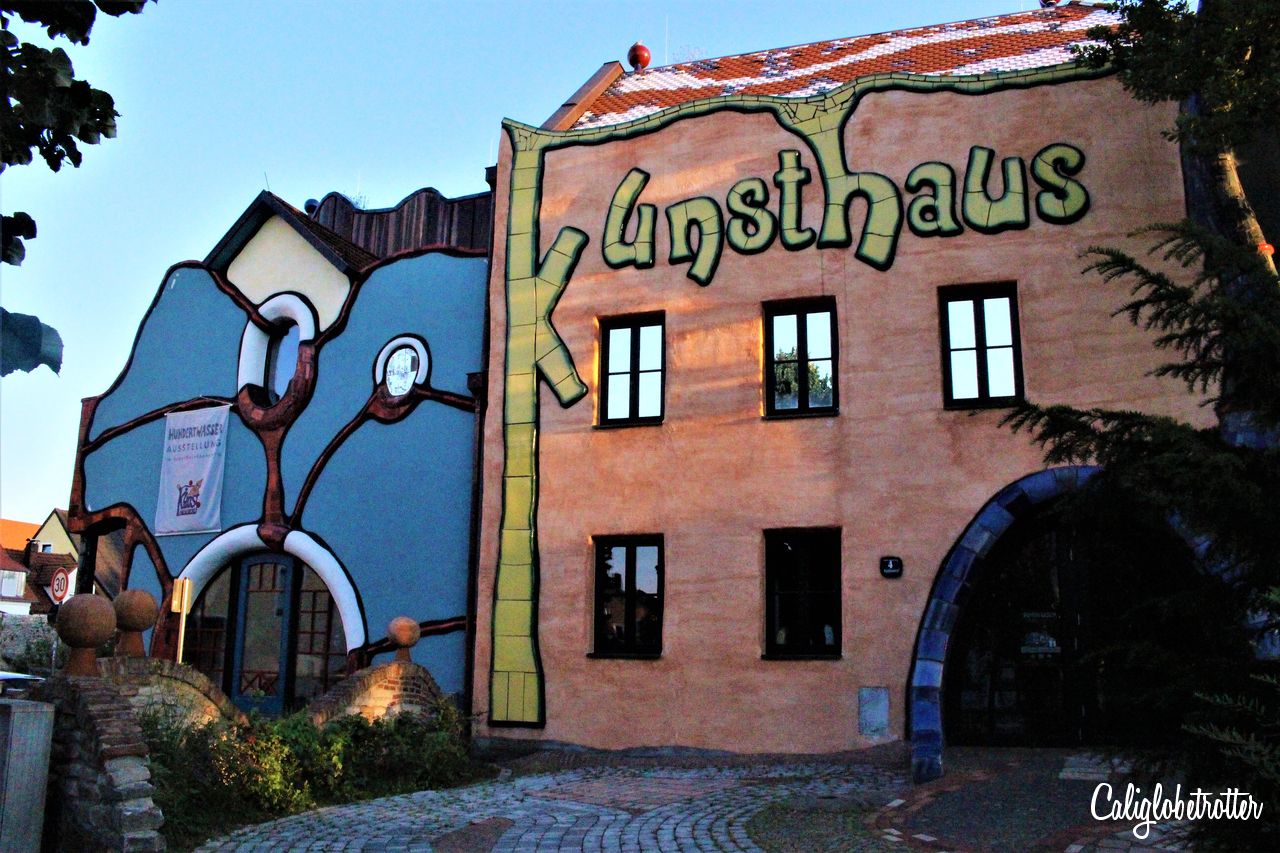 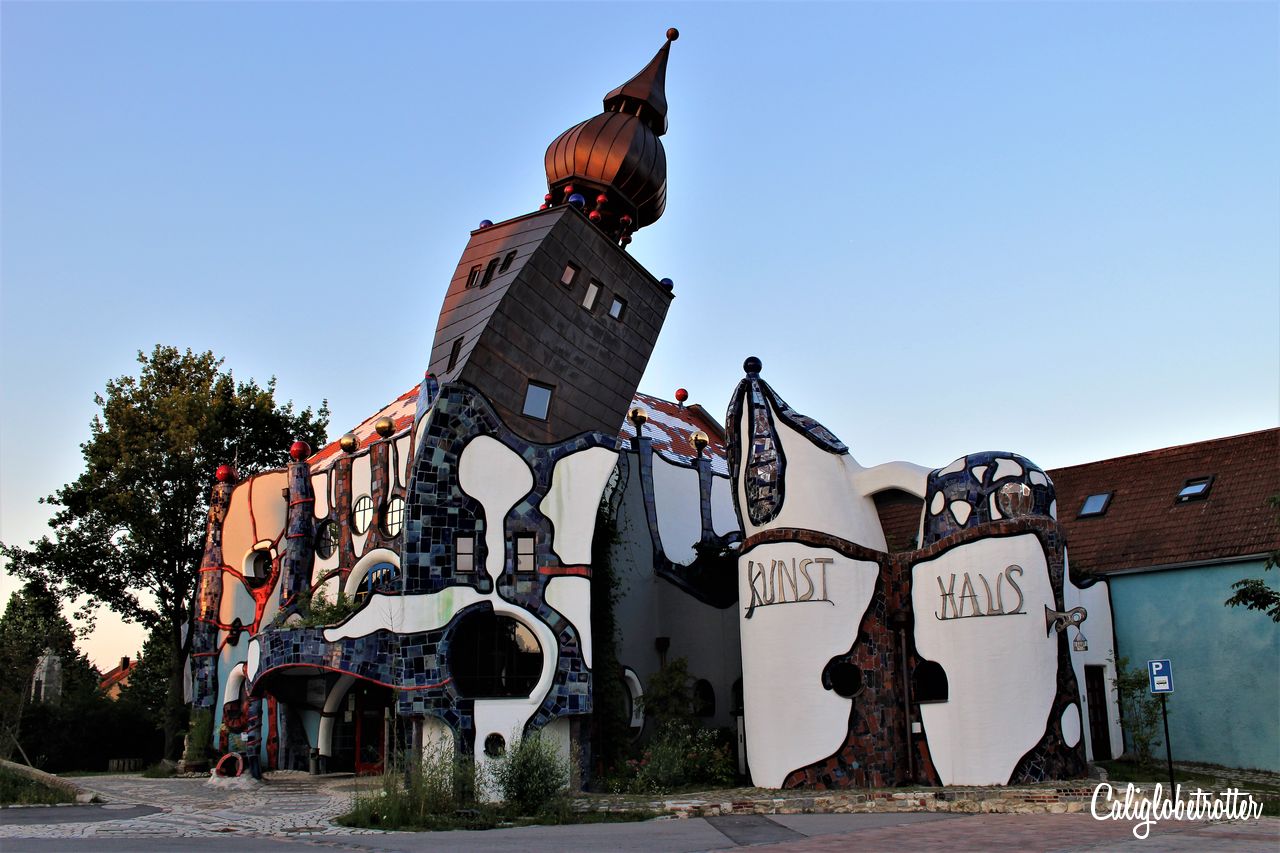 At the time that we decided to test out our new camera and take pictures of the tower, evening had set in and the biergarten was closed for the evening. We plan to go back and do the tour of the brewery at a better time. Until then, we decided to walk around the town which has had a settlement here dating back to the Neolithic times!

We strolled along the Abens river which flows past parts of the old town wall, which looks more like a small castle than a wall built for protection. Then we eventually meandered into the main town square, where people were lounging around at the local restaurants. The ice cream shop was especially hoppin’ as it was an incredibly hot day. As the town is pretty small, you won’t need more than just a few hours to stop by, unless you’re planning on doing the Brewery Tour and then sit down at the biergarten for a couple of hours. 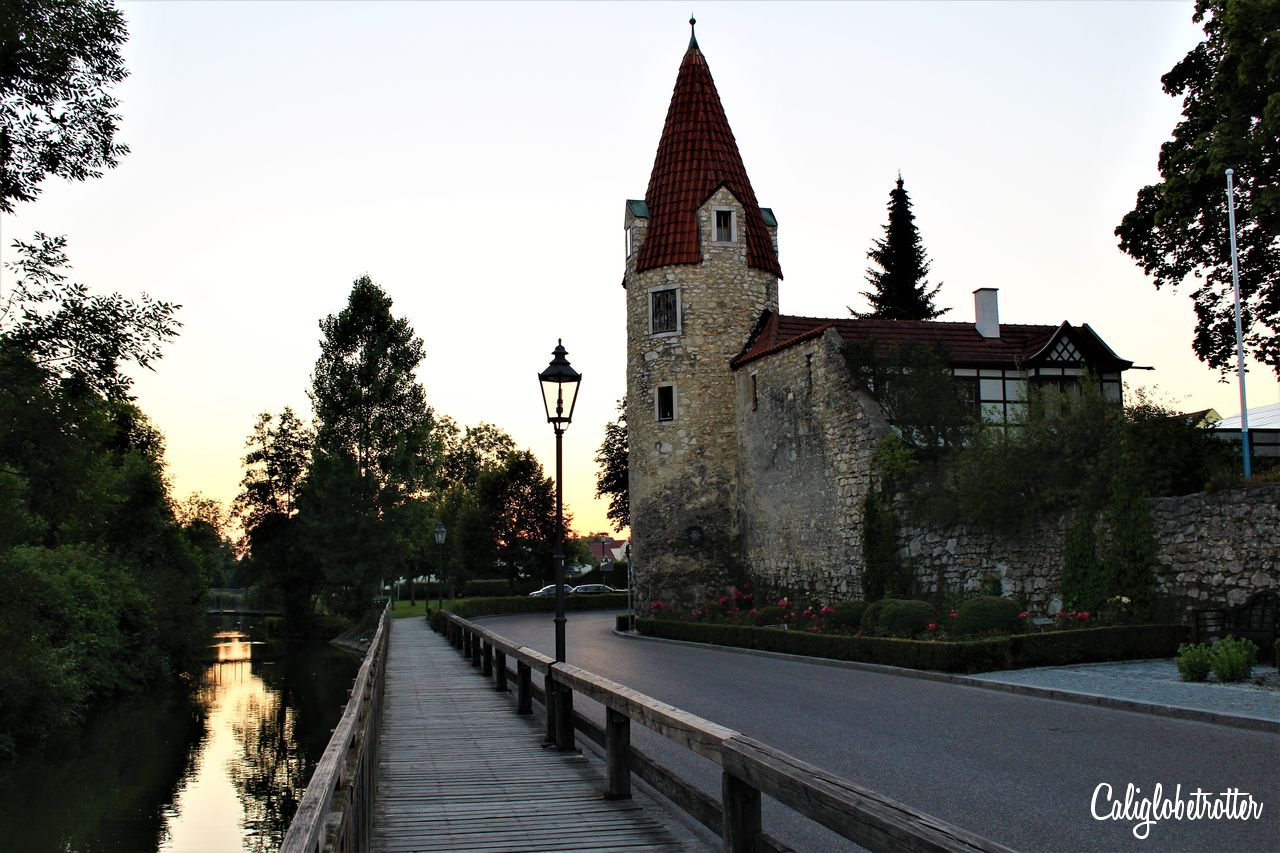 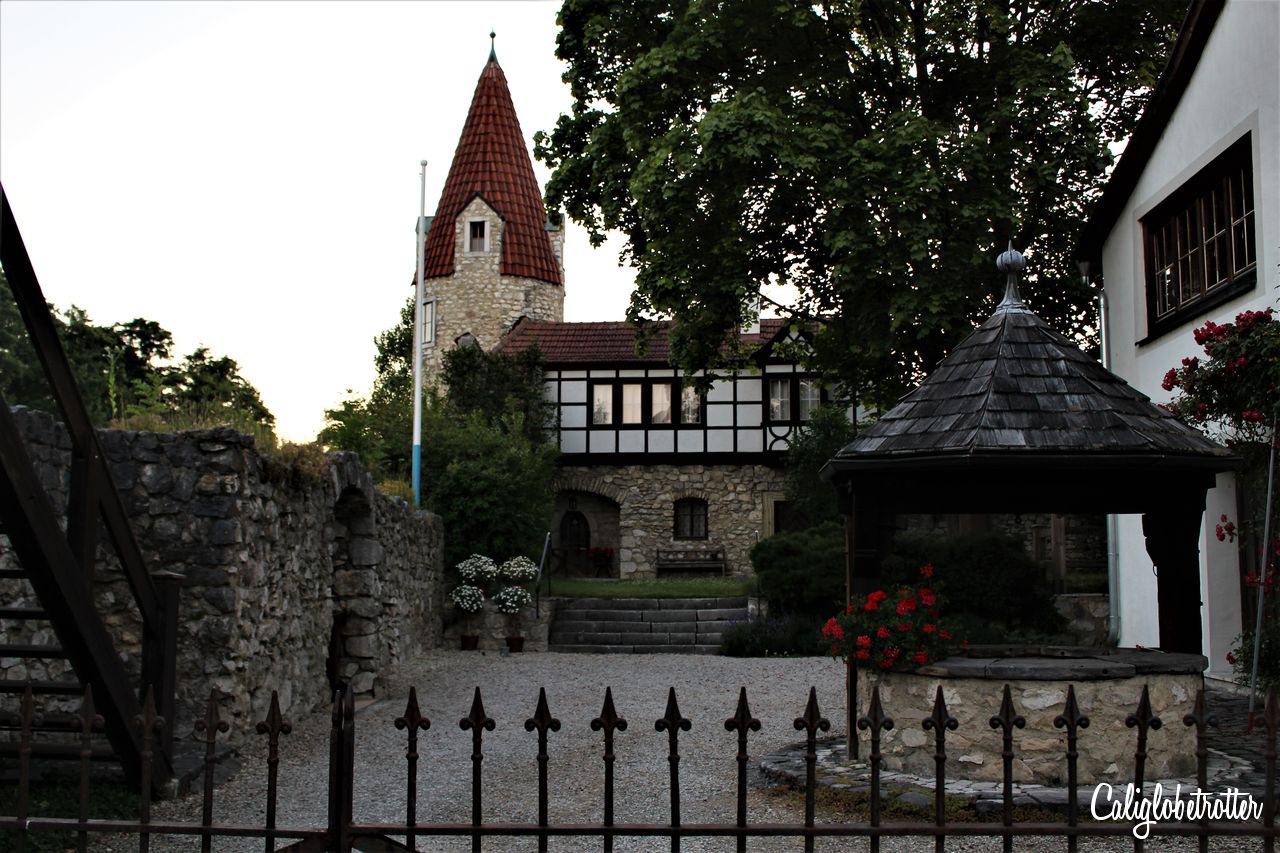 How to get here:

By train: Take a train to the Abensberg Bahnhof. The railway station is about a ten minute walk from the town center. From the station forecourt you can see Bahnhof Strasse leading away slightly to the right. To make sure you get the right road take the one with the hotel in it. After a few minutes you will have reached Schulhausplatz. To the right you will see Römerstrasse and the Kuchlbauer brewery.

By Car (from Regensburg):

Take the A93 to exit 40/49 towards Abensberg. Follow the road, turning left on Ulrichstrasse then towards Römerstraße. Parking is available to the left of the brewery or behind the brewery there is a car park. 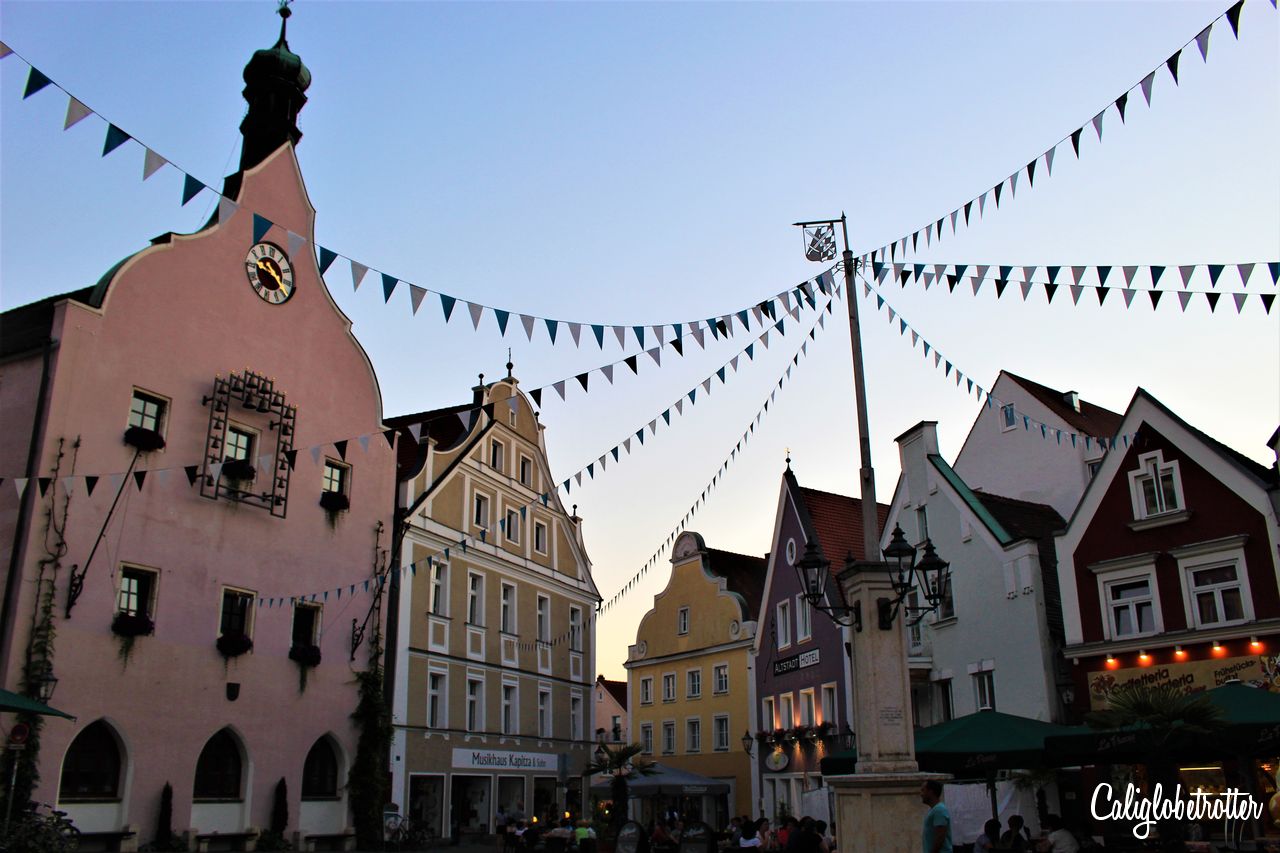 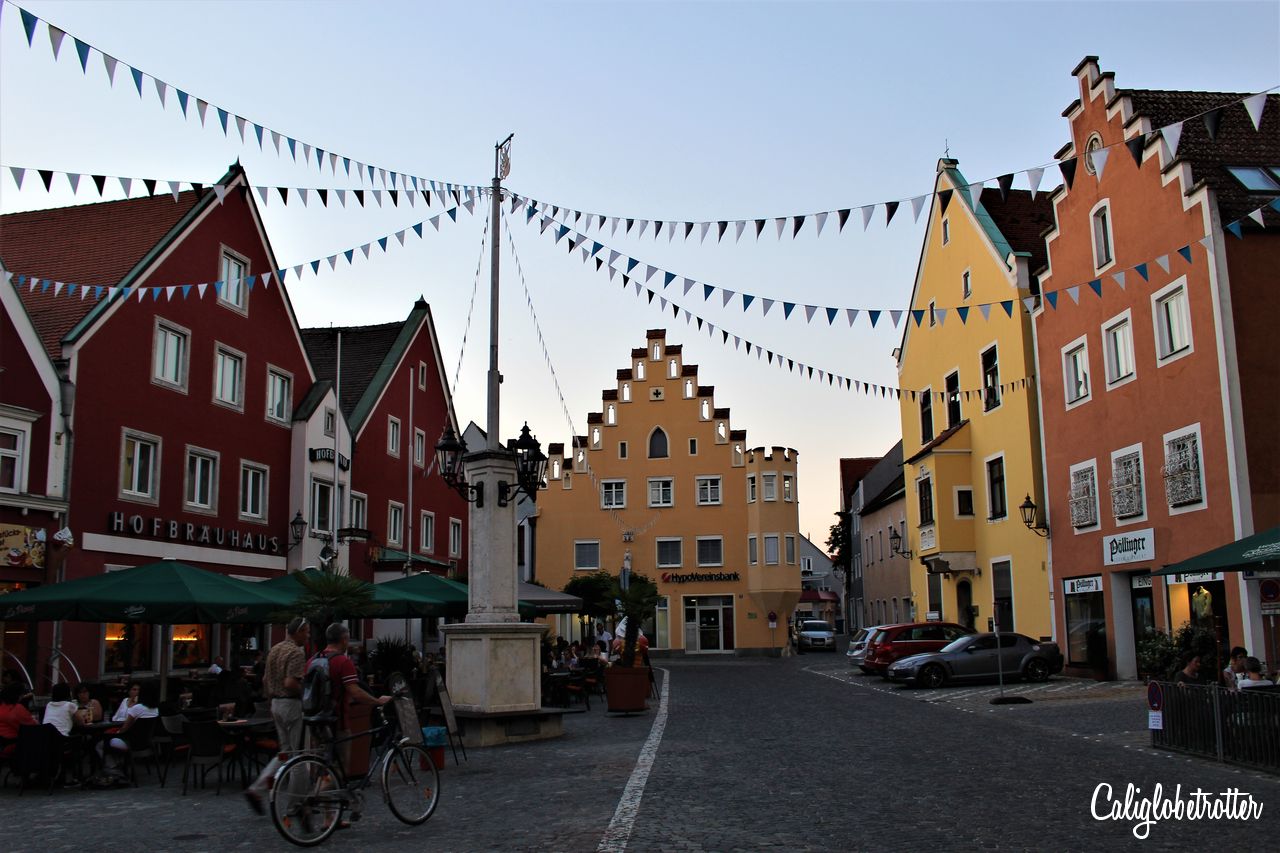 Overall, if you have extra time, it’s worth walking around the historic little village center after visiting the Kuchlbauer Brewery because the town is so much more than just the brewery. It has such a relaxed vibe to the town, you could easily sit at one of the cafes/restaurants and soak in the summer evening!

If you’re interested in visiting Germany and are looking for more information, I highly recommend using the DK Eyewitness Travel Guide! Without these guides, I would be lost! This is my travel Bible! And if you’re looking for a Bavarian Biergarten Cookbook, below is the one I highly recommend and personally use on a regular basis and give as a gift to everyone who visits me!


Disclaimer: This post contains affiliate links. If you click on one and make a purchase, I might make a little extra spending money, at no extra cost to you. As always, all opinions are my own and these products/services have been found useful during our travels and come highly recommended to you from yours truly!

A Local’s Guide to the Historic Town of Regensburg