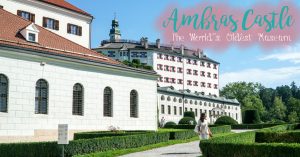 A visit to Schloss Ambras carries you back in time to the 16th century era of Imperial Austria in all its glory. This castle and palace complex occupies prime land on a hill overlooking the colorful town of Innsbruck. The regal castle is open to the public, and you’ll enjoy not only the elegance of the architecture but also displays of art collected by Habsburg ruler Archduke Ferdinand II. 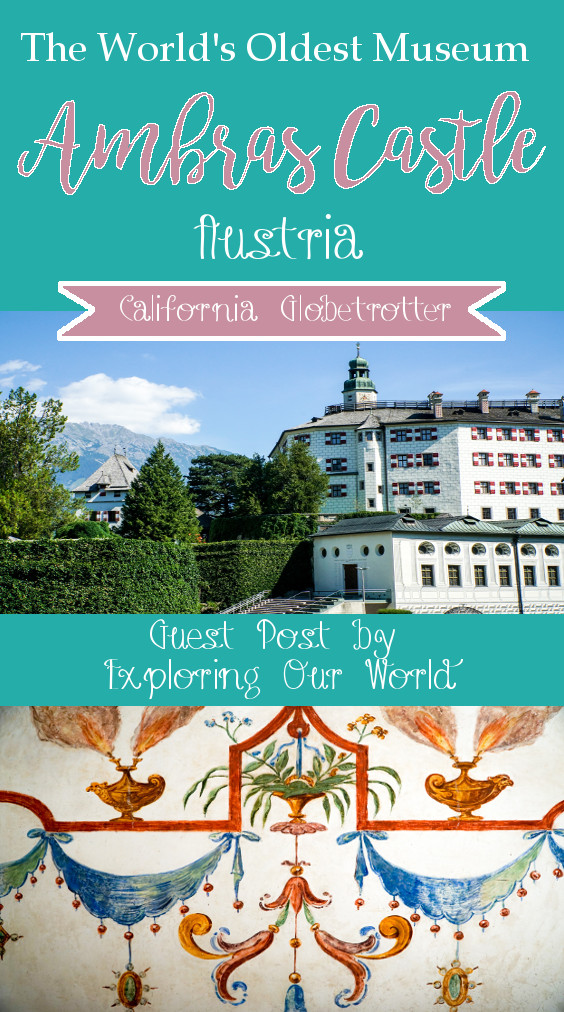 We approached the castle by walking up the hill from the Ambras tram stop. Winding through the forest, I could imagine the royalty of old walking these same lanes through the majestic trees.

Emerging from the woods, we went through the castle gate and entered the complex. You can purchase a ticket that gives you access to all the buildings, so you’re free to wander as you wish. You feel the air of elegance right away when you are surrounded by the castle’s English landscape gardens. 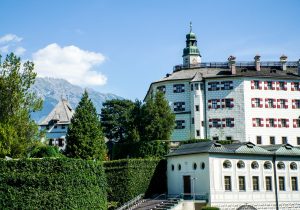 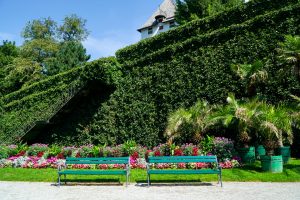 Ambras Castle is mentioned in literature dating back to the 10th century, even before Innsbruck became a city about 800 years ago. Ambras was long ago the seat of power for Counts that ruled parts of the Bavaria. The castle, just one of the beautiful buildings, is built into the remains of a medieval fortress. The Habsburg dynasty occupied the castle in 1363. What you see today is an “update” to the buildings and museums by Archduke Ferdinand II in the late 1500s that took the castle from medieval architecture to Renaissance style. 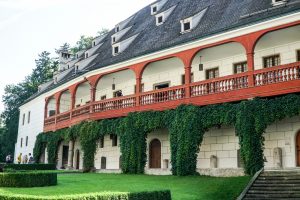 The Archduke’s motivation for remodeling and expanding the castle was to showcase his extensive collection of art and armor. Ambras Castle is thus known as the world’s oldest museum, with many of the collection pieces still on display in this same location after hundreds of years. After the reign of the Habsburgs, the castle passed into disrepair but was eventually taken over by the Republic of Austria. Extensive renovation took place in the 1970s and 1980s, so today the castle buildings are clean and bright and welcoming. 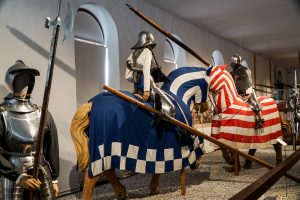 My favorite display is the Chambers of Armour. So much shining armor! There is even a child-size suit. The collection is a result of the passion of Archduke Ferdinand II to assemble in his castle the armor of famous military commanders. He wanted to emphasize the role of the Habsburgs in winning battles. His own private armor is part of the collection. The Archduke designed the rooms for display using natural light and produced an illustrated inventory of the weapons and armor – the first known museum catalog. 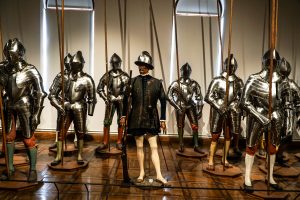 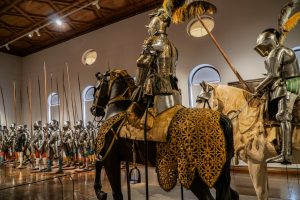 The walls of the armor rooms are decorated with paintings of military figures and family crests.

And of course, the horses dressed up for battle, too.

The Chamber of Art and Curiosities

Paintings hang in different buildings and works by artists such as Titian and Van Dyck are in the gallery.

The museum’s “curiosities” fascinated me. The piano is a style I haven’t seen anywhere else. 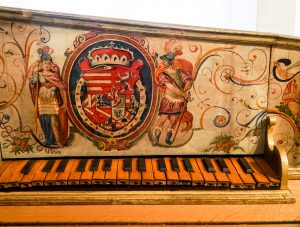 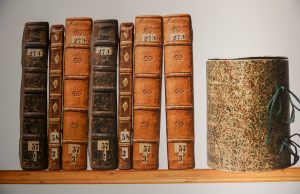 Care to attend a ball? Or an evening concert? You will probably not find a more beautiful setting than the Spanish Hall, built by Archduke Ferdinand II between 1529 and 1572. The walls are hung with 27 full-size portraits of Tirolean rulers. Around the top are framed paintings of clouds and blue sky, giving the illusion that the room is open to the outdoors. The doors and ceiling contrast with the paintings, being made of a combination of woods with touches of gold gilding. This is a Renaissance masterpiece.

The Chapel of St. Nicholas

The lovely Chapel of St. Nicholas pre-dates the castle, having been built in the 1300s. Ferdinand II renovated the chapel to use with his castle, putting in a new entry door to the castle courtyard. When Archduke Karl Ludwig came to live in the castle in the 1800s, he further updated the chapel with added art, such as stained-glass windows. This peaceful place, with sun streaming through the colored glass, is truly a sanctuary in the Alps. 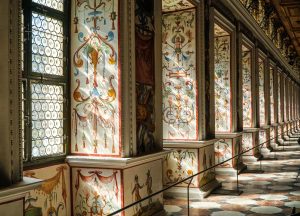 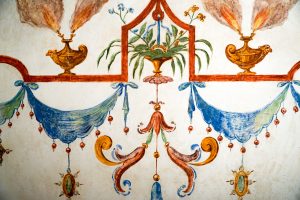 Back Down the Hill

We walked back through the forest, hit the edges of town, and got lost. We didn’t really care, though, because the streets offer picturesque houses, with colorful flower boxes, and the Alps rise in the background. It’s a magical place where you can imagine knights in armor riding their horses down from the castle, heading through the old town. 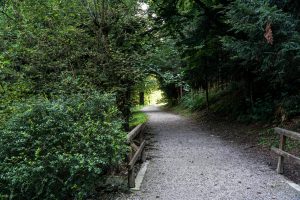 Hungry? Grab a tasty lunch at the Ferdinand Café and Bistro in the historic Gothic kitchen in the Upper Castle. We enjoyed sitting in the castle and relaxing while eating lunch before starting back in on our adventures. 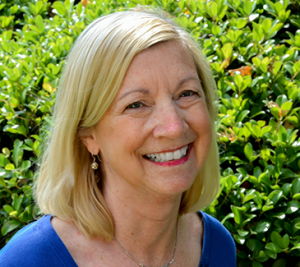 Sharon writes about her travel adventures at Exploring Our World. Her blog can help inspire you to plan your own adventures – whether that means spending a day at your local park or jetting across an ocean. She believes that exploring new places enriches our lives. And this wide, wide world holds so much to see! Sharon has fallen in love with Europe – the history, the architecture, the beauty, and the people. Her husband says that every European jaunt should end with a few days in Paris, and she’s not objecting! For travel ideas and inspiration, follow her on Instagram and Pinterest.

Fall in Love With These 15 Cities in Southern Germany

10 Amazing Cities You Have to Visit in the Balkans

Skip the Cities – 10 Reasons to Visit Small Towns in Germay

Replies to Ambras Castle in Austria – The World’s Oldest Museum