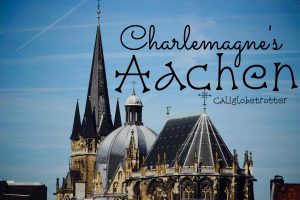 Not far from the German/Belgian border lies the most western town in Germany and a site of historical importance which is an easy day trip from Frankfurt. During the Middle Ages, Charlemagne had a cathedral built here, modeled after the church of San Vitale in Ravenna, Italy. Aachen would become the seat of his political empire and the court. The town would later gain importance as for the next 500 years, all future kings of Germany would be crowned here before preceding to reign over the Holy Roman Empire.

Want to Visit Aachen? PIN IT FOR LATER!!

As a last minute decision, we decided to visit Aachen, mostly drawn in by the beauty that is Charlemagne’s Pfalzkapelle (cathedral). After it’s completion in 798, the cathedral was the largest north of the Alps. It is by far one of the most unique cathedrals I have yet to step foot inside of in Germany. It is much smaller than it appears, yet still possess a dominant force within the city.

The entire inside of the cathedral is decorated in marble brought in from Rome and Ravenna, Italy, as well as very intricate patters throughout the entire place.

Centered in the middle of the cathedral are the pews and directly above them hangs the massive copper candelabra, almost in the shape of a crown, given as a gift to Charlemagne from Emperor Friedrich I Barbarossa.

Of importance within the cathedral is the Shrine of Charlemagne. After his death and upon becoming a saint, he was laid to rest and enshrined in a golden shrine.

Also, found inside the cathedral is the throne that saw the coronation of 30 German kings and 12 German queens. However, we somehow missed this and according to my travel guide, it seems that it might have been on the second floor, which we weren’t allowed to go up to. So, needless to say, we were bummed about realized we had missed upon returning home.

After checking out the cathedral, we meandered around the town to check out some other sites. The next most impressive building just beyond the cathedral is the Rathaus (city hall). The Rathaus was built in the 14th century and expanded under Charlemagne’s orders. We had wanted to go in, but it wasn’t open to the public that day. 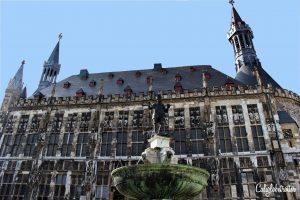 As we weren’t very impressed with the city beyond the cathedral and Rathaus, we casually strolled along, checking out the many different water fountains, stopping to enjoy a coffee at Starbucks before we decided to check out one of the cool city gates we passed while driving into the town.

The Ponttor (The Pont Gate)

The Ponttor is one of two city gates that remains from the 14th century which was manned by militia during the Free Imperial City of Aachen era. There are gates at either end, where enemy forces could be trapped and have things dropped on them. 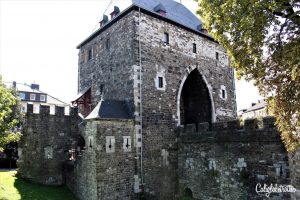 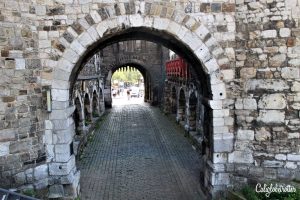 We were slightly disappointed in Aachen, having thought it would be a much smaller city than it was. This was our first taste of a “trip fail” as everything about this city wasn’t at all what we had in mind. Usually the larger the city, the dirtier it becomes and such was the case with Aachen. We found it full of graffiti everywhere, homeless people sleeping on park benches and trash everywhere. It didn’t feel like any German city I had ever been to before. We made the most out of our afternoon in Aachen, hoping to find something that would change our opinion about the town, but to no avail. While the cathedral was absolutely stunning, we were left unsatisfied.

To be honest, we really couldn’t wait to leave, for which I was incredibly sad about. It was about the first time I didn’t go all snappy picture crazy. Needless to say, that is why it took me forever to even bother writing this post.

During our visit, we stayed at Art Hotel Aachen, just a few minutes out of town as they provided parking. The hotel was incredibly comfortable and aesthetically pleasing. 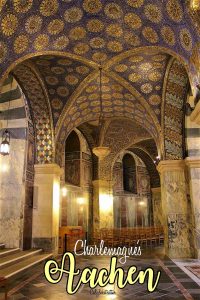