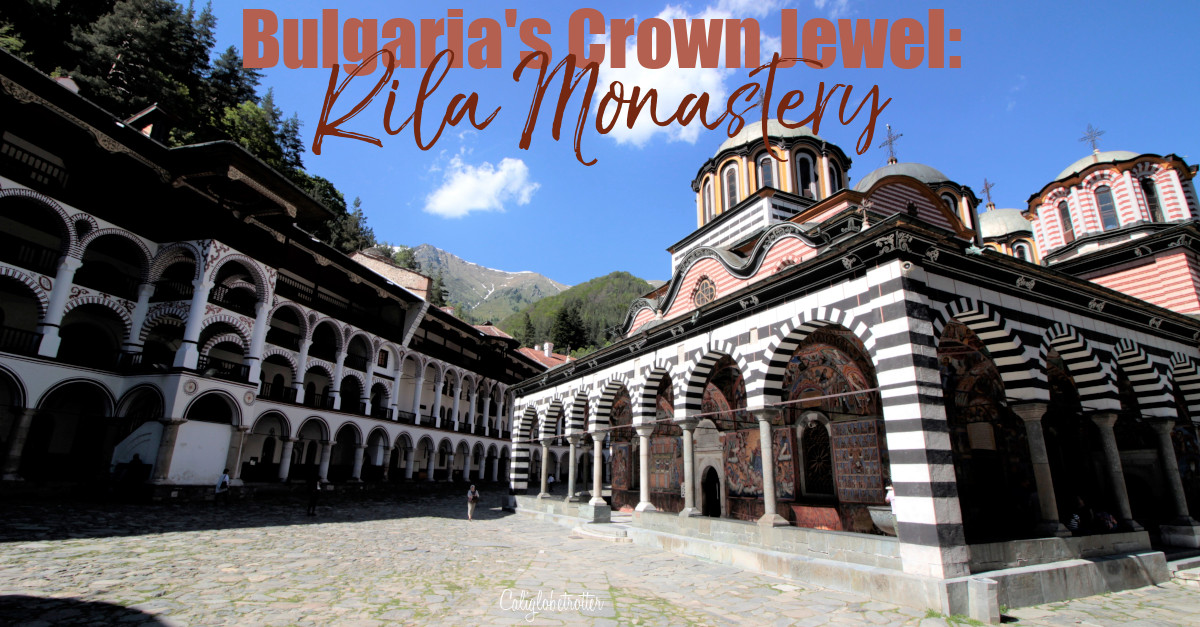 Before I discovered Rila Monastery, I knew next to nothing about Bulgaria. The country wasn’t even on my radar and I wasn’t even entirely sure if it was safe to visit the country. Over time, I started collecting other beautiful pictures of stunning buildings throughout Bulgaria. Before I knew it, the country made it on the itinerary for our honeymoon road trip.

While driving from Skopje, Macedonia to Sofia, Bulgaria, we planned to stop for a few hours to explore this vibrant monastery as it is approximately 100 kilometers from the capital. Being an architecture lover, I just knew there was no way I could go to Bulgaria and not see it!

Rila Monastery is tucked deep within the surrounding Rila Mountains within a forested valley in Rila Monastery Nature Park and it’s quite the journey to get there through small villages and winding roads. But I promise it’s worth visiting one of the most popular sites in Bulgaria!

Sound Interesting Yet? PIN IT FOR LATER!! 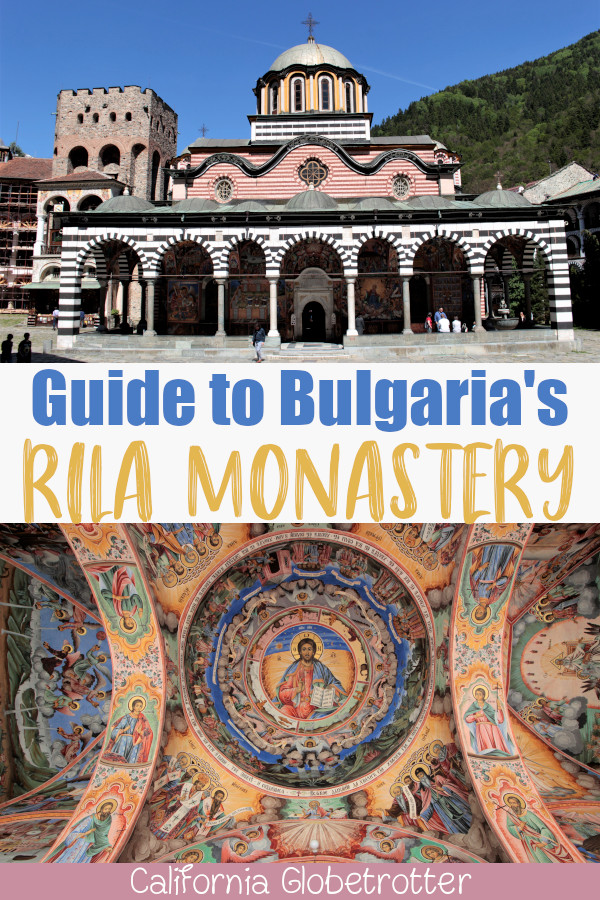 History of the Monastery 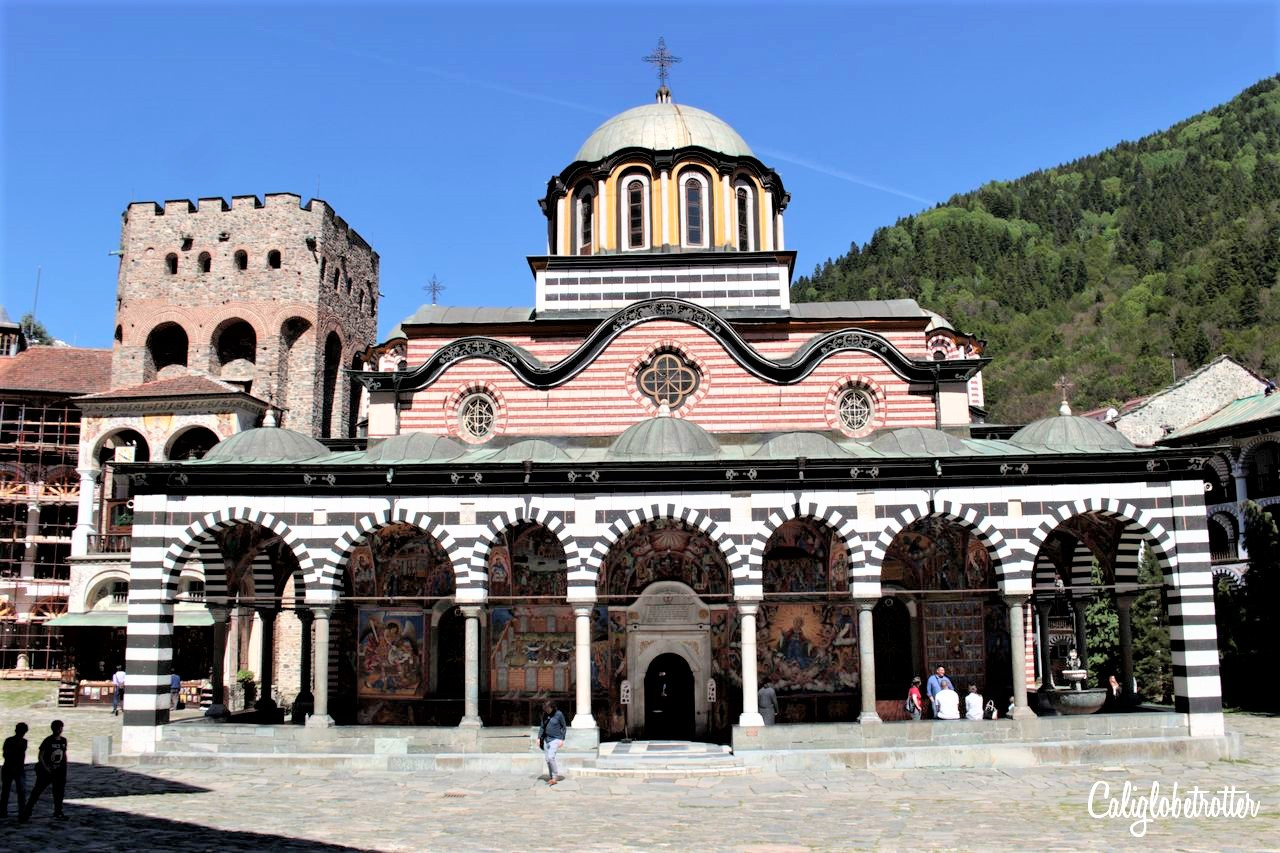 Officially dubbed as the Monastery of Saint Ivan, the monastery is named after a hermit monk, Ivan of Rila, who spent seven years living in a cave without any possessions, devoting his life to prayer and fasting.

Up discovering this, many students trekked out to the Rila mountains to study with Saint Ivan. The original complex was built by the students and is today the largest Eastern Orthodox monastery in Bulgaria, claiming the title of “Crown Jewel of Bulgaria”. The monastery became more popular among pilgrims after Ivan’s death in 946 A.D. The complex has been played an important historical and cultural significance to the Bulgarian national identity.

The monastery is one of the oldest religious centers of the Slavic world and has remained continuously active since it was founded in the 10th century. Only for a short blurp during the Communism era, was the monastery was turned into a museum. In 1983, it became a UNESCO World Heritage Site which now attracts closer one million visitors per year as it’s an easy day trip from Sofia! 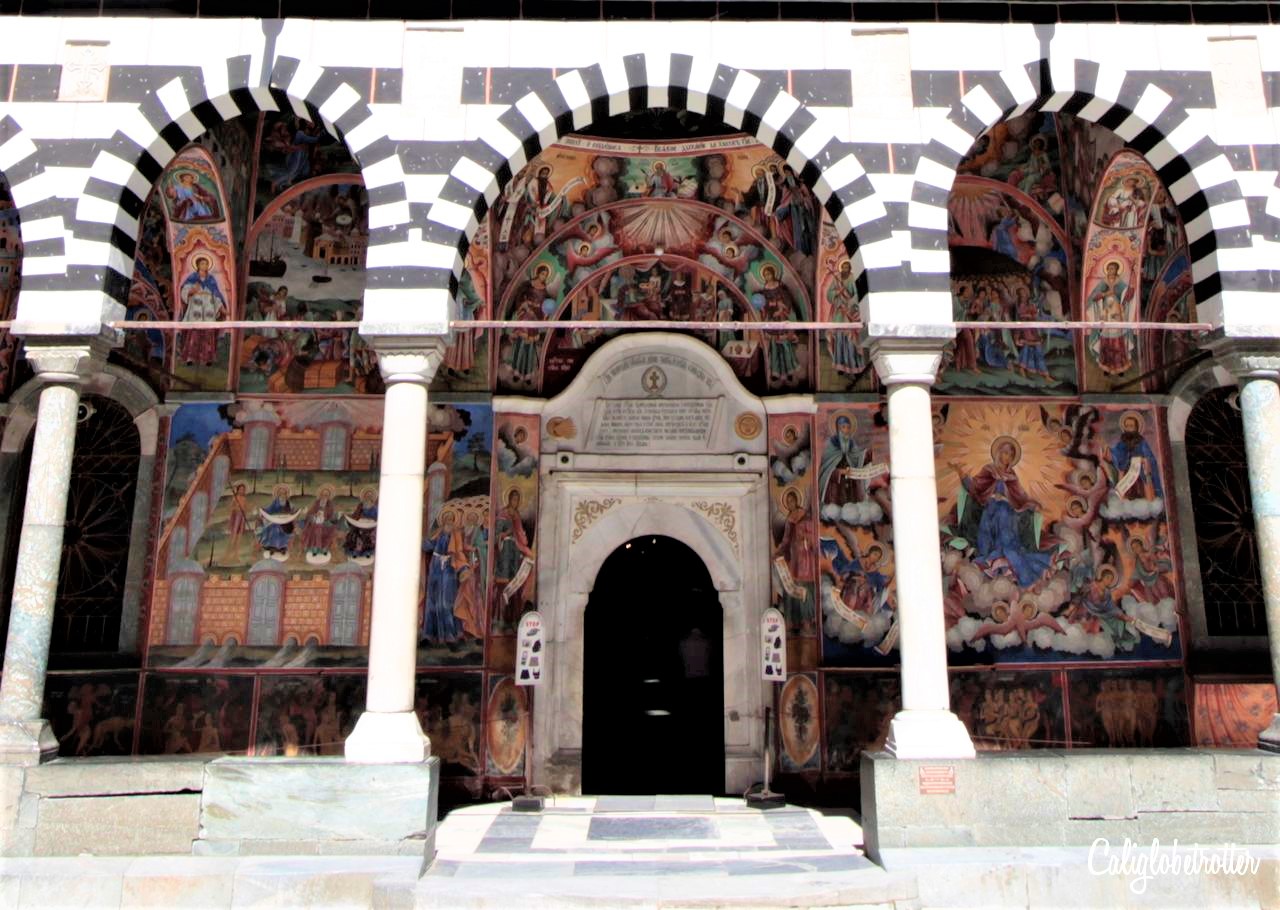 It is also regarded as one of the important masterpieces of Bulgarian National Revival architecture. As one of the largest monasteries, it has over 300 chambers for the monks. Today, the numbers are dwindling and only around 60 monks remain and you’ll likely see several of them walking around. 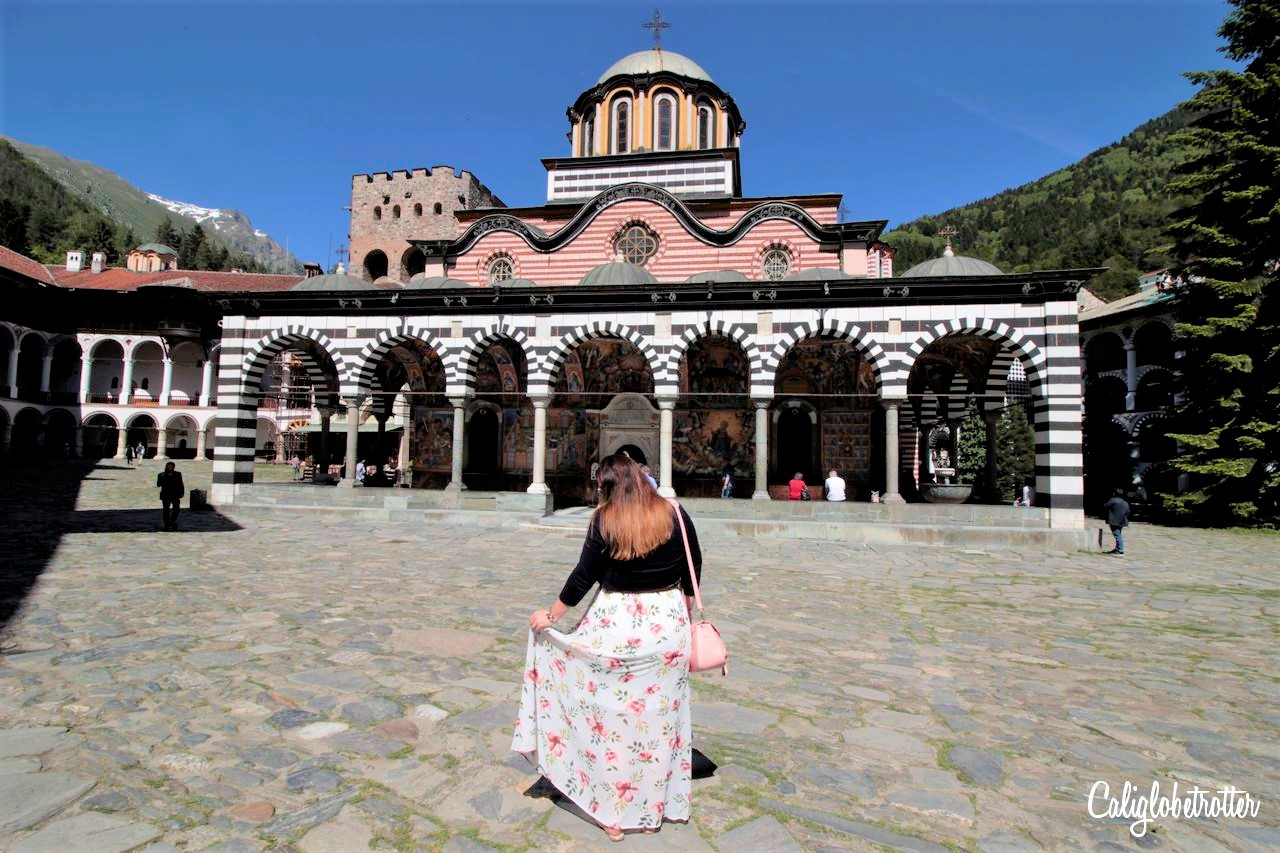 The monastery is free to enter, but there are some things you should be prepared for before entering. You will be visiting a place of worship that is still very much active, therefore, you must be dressed appropriately.

Women should be modestly dressed, meaning no short shorts or dresses. No revealing clothing. Shoulders must be covered. I was under the impression I had to wear a scarf, but once inside, I saw no one wearing one. But, just in case, better to have one than not.

Men should also be dressed modestly, meaning no shorts or reveling sports shirts. Long pants and a casual shirt is sufficient.

You will also notice that security officers are present in and around the monastery. Likely not to prevent attacks, but more to keep an eye on the tourists in this deeply cherished national treasure.

The outside of the monastery looks rather plain and you might second guess your visit to the monastery, but as you walk through the archways, you will slowly begin to be greeted to magnificent, colorful and intricate paintings. 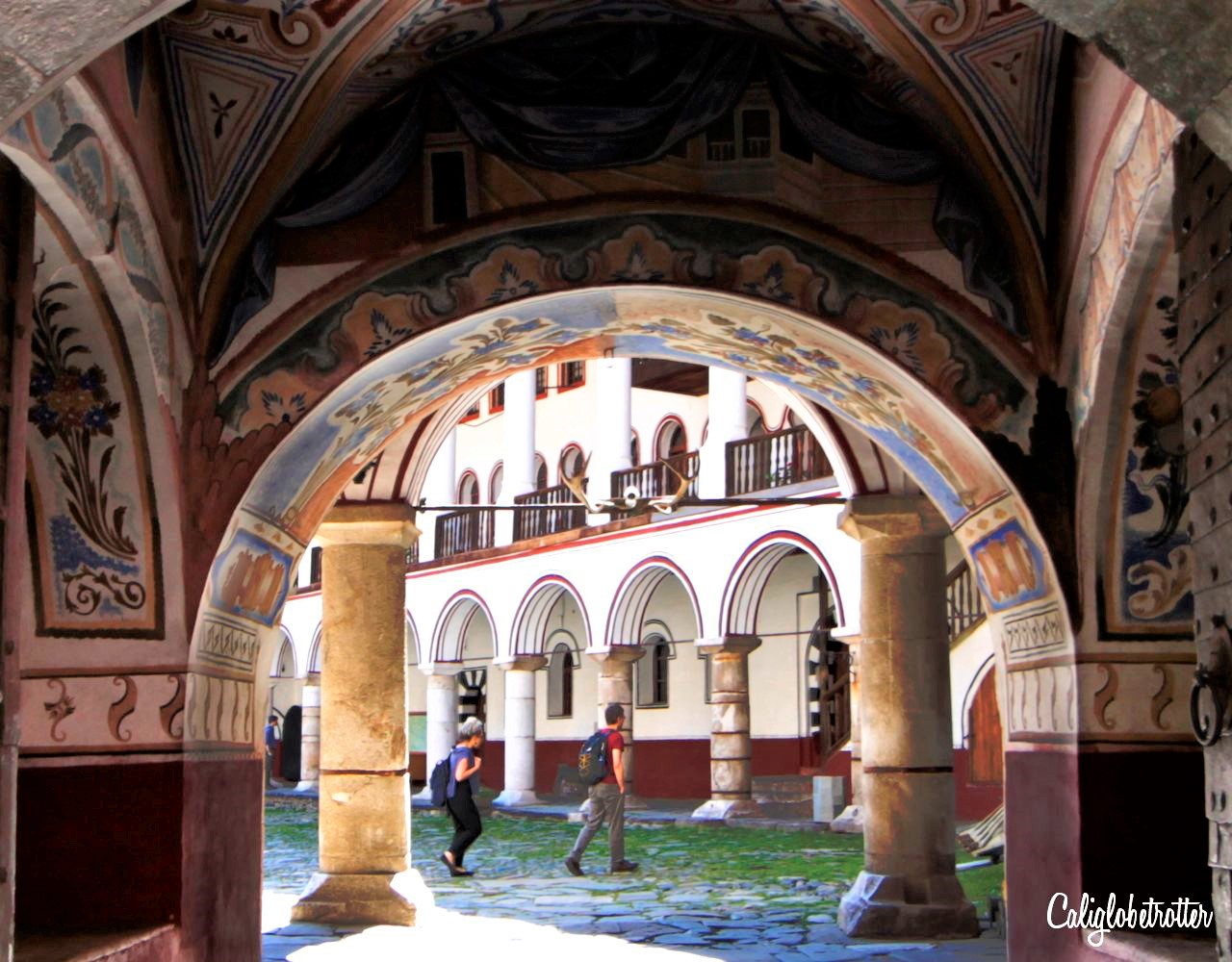 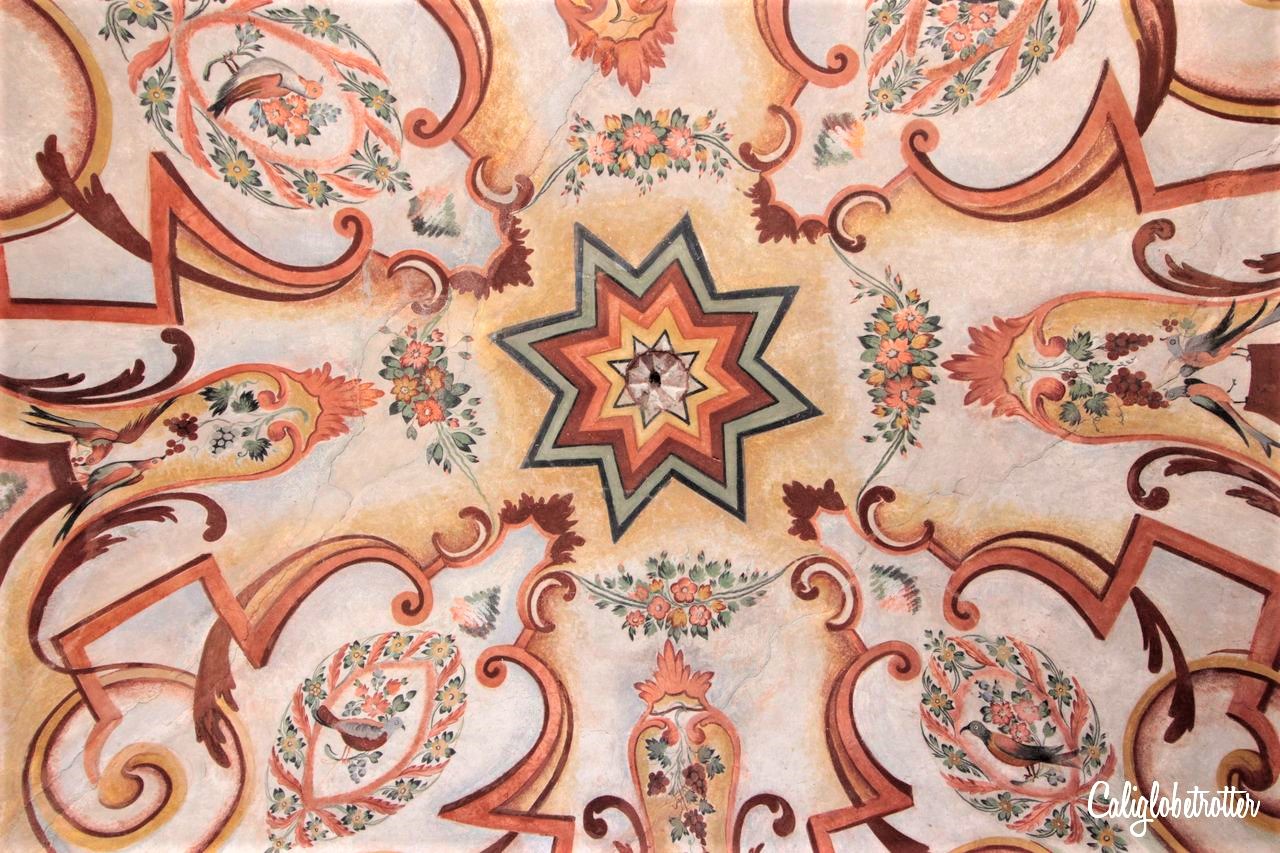 Once inside the courtyard, you’ll notice that it contains the main church, the residence of the 300 monks encircling you, a tower and a museum occupying an area of 8,800 sq meters. 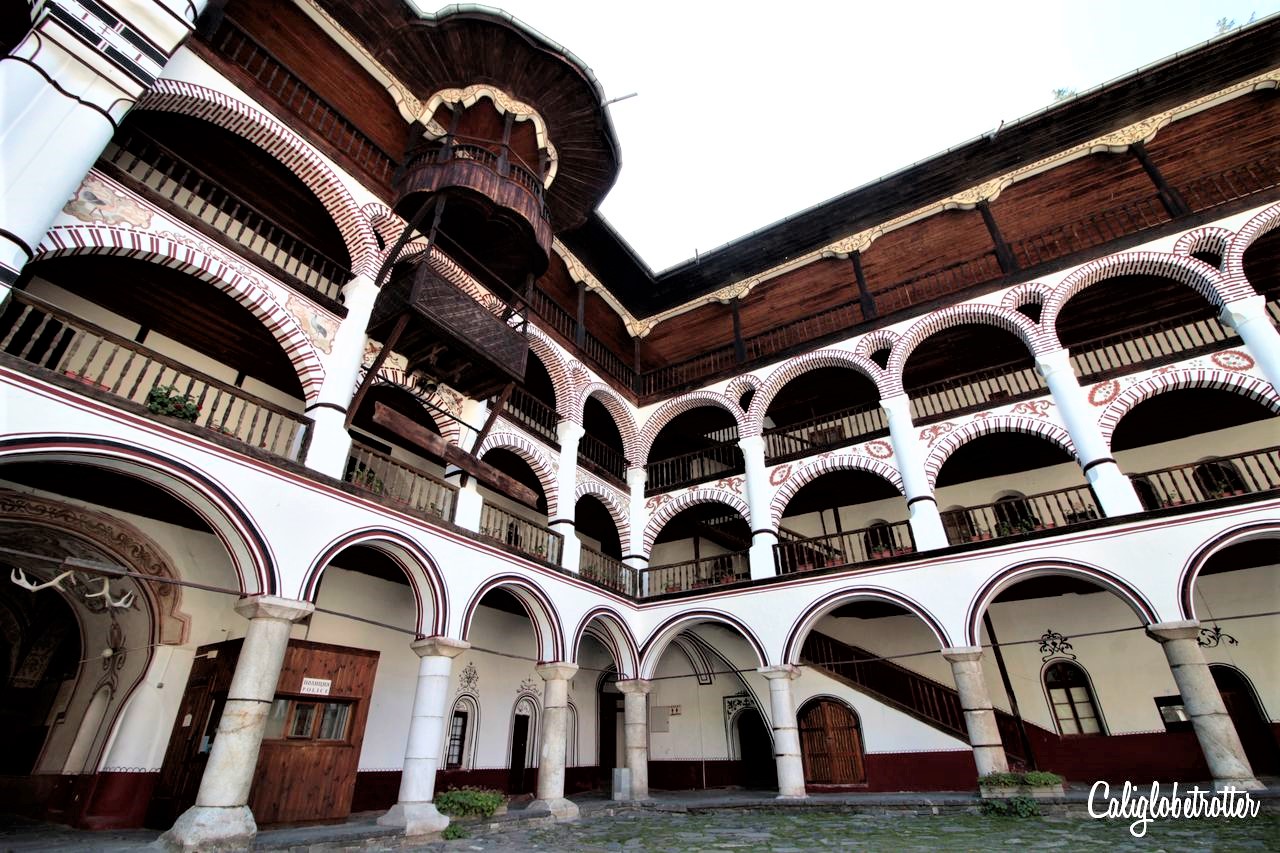 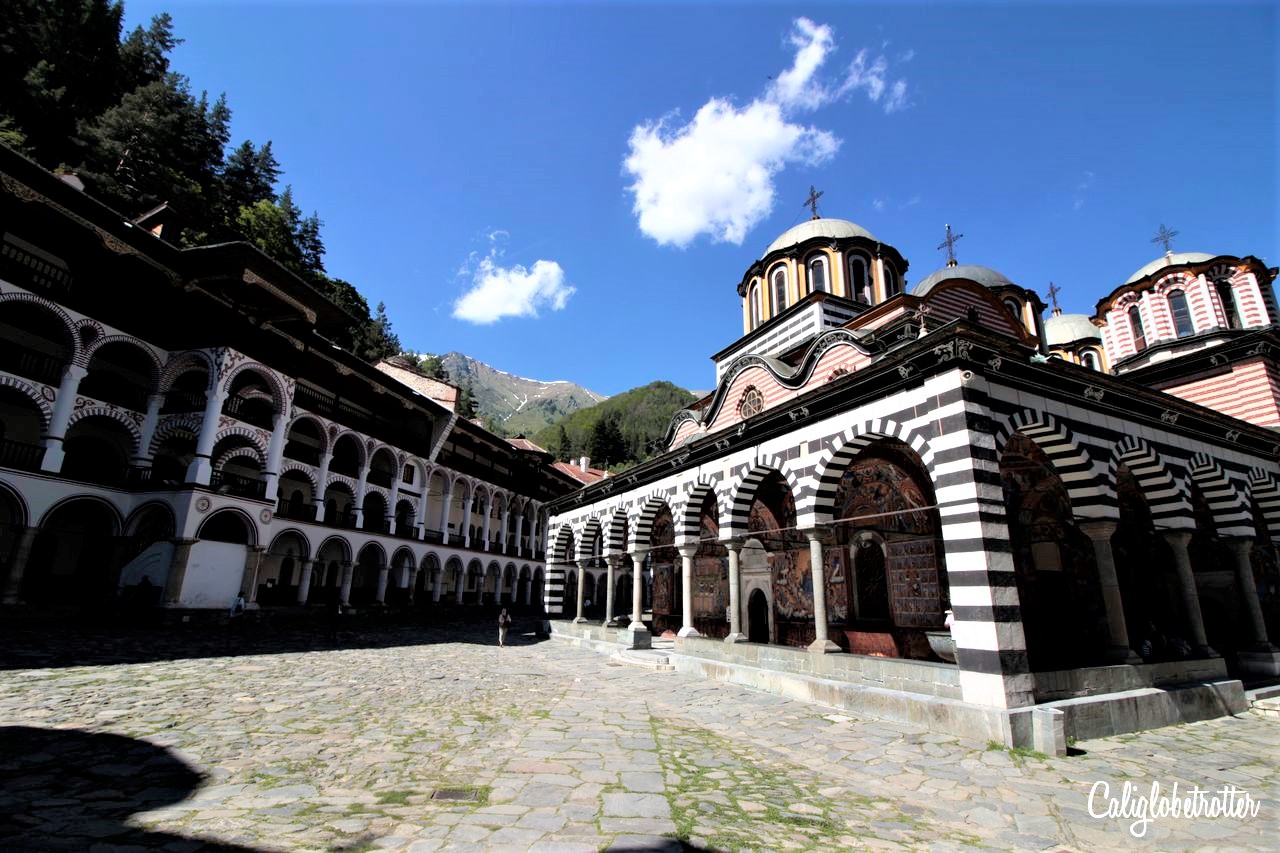 As a beloved place of worship, wealthy Bulgarian rulers often donated to the monastery to help it expand and to grow. The monastery went through several architectural changes after a few fires and after the arrival of the Ottomans in the 14th century. There were many raids resulting in the destruction towards the middle of the 15th century by the Ottomans. It was later rebuilt by the end of the 15th century, only to be destroyed by a fire again in the 19th century. Luckily, it’s been beautifully restored!

Upon walking into the inner courtyard, I expected to find it quiet and solemn, however, it’s clearly a school field trip destination. Luckily, the children left shortly after our arrival allowing us to better enjoy the monastery.

We were immediately blown away by how vibrant the colors were, the symmetry and alllll of the details! All backed by the Rila mountains stretching high into the sky in the background. 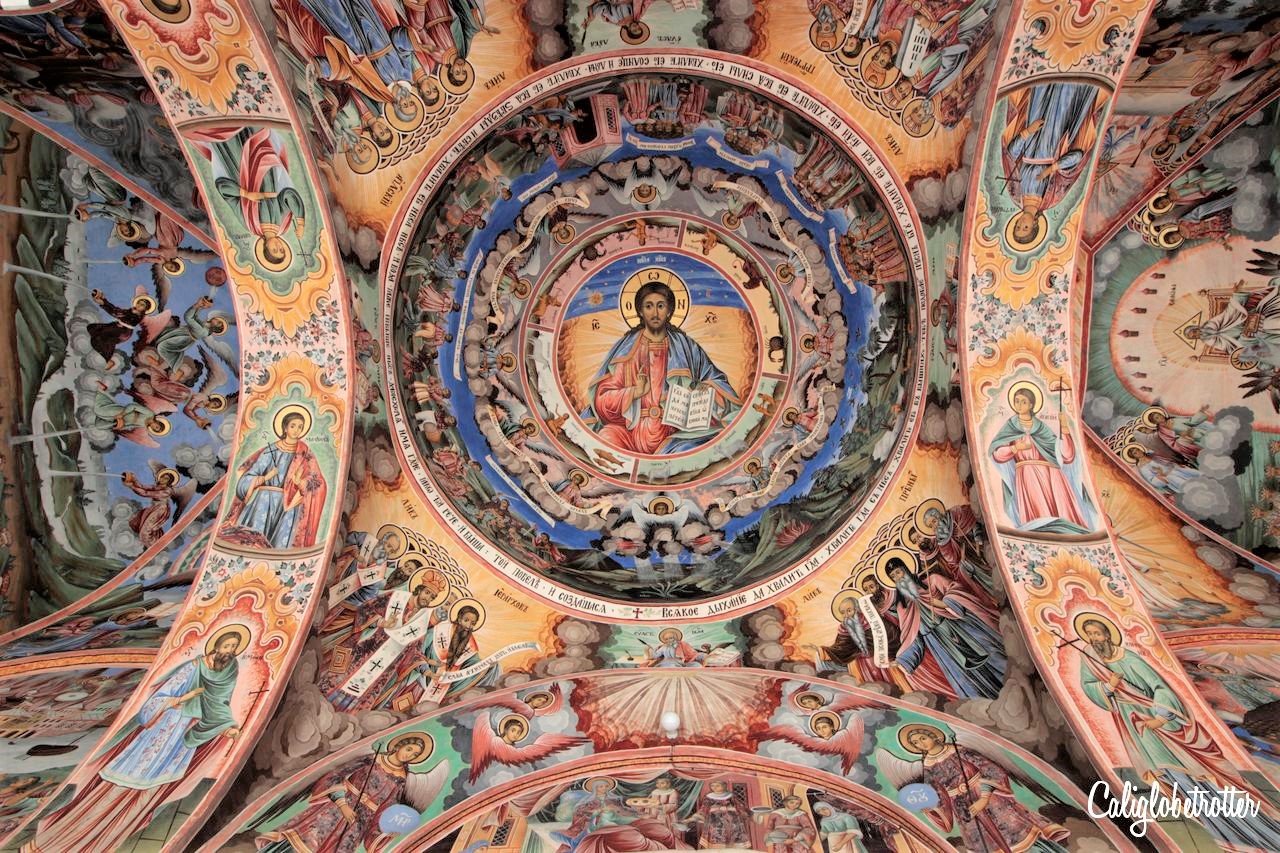 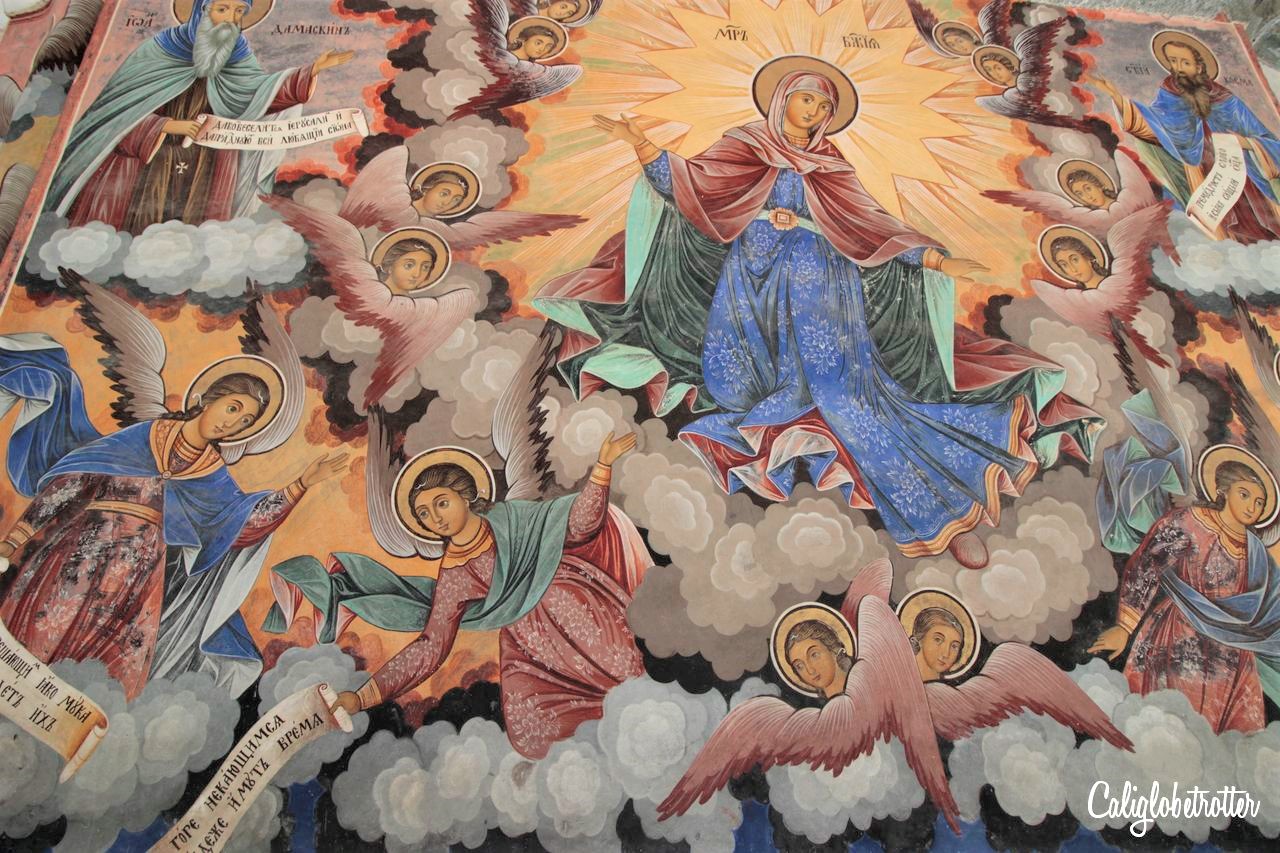 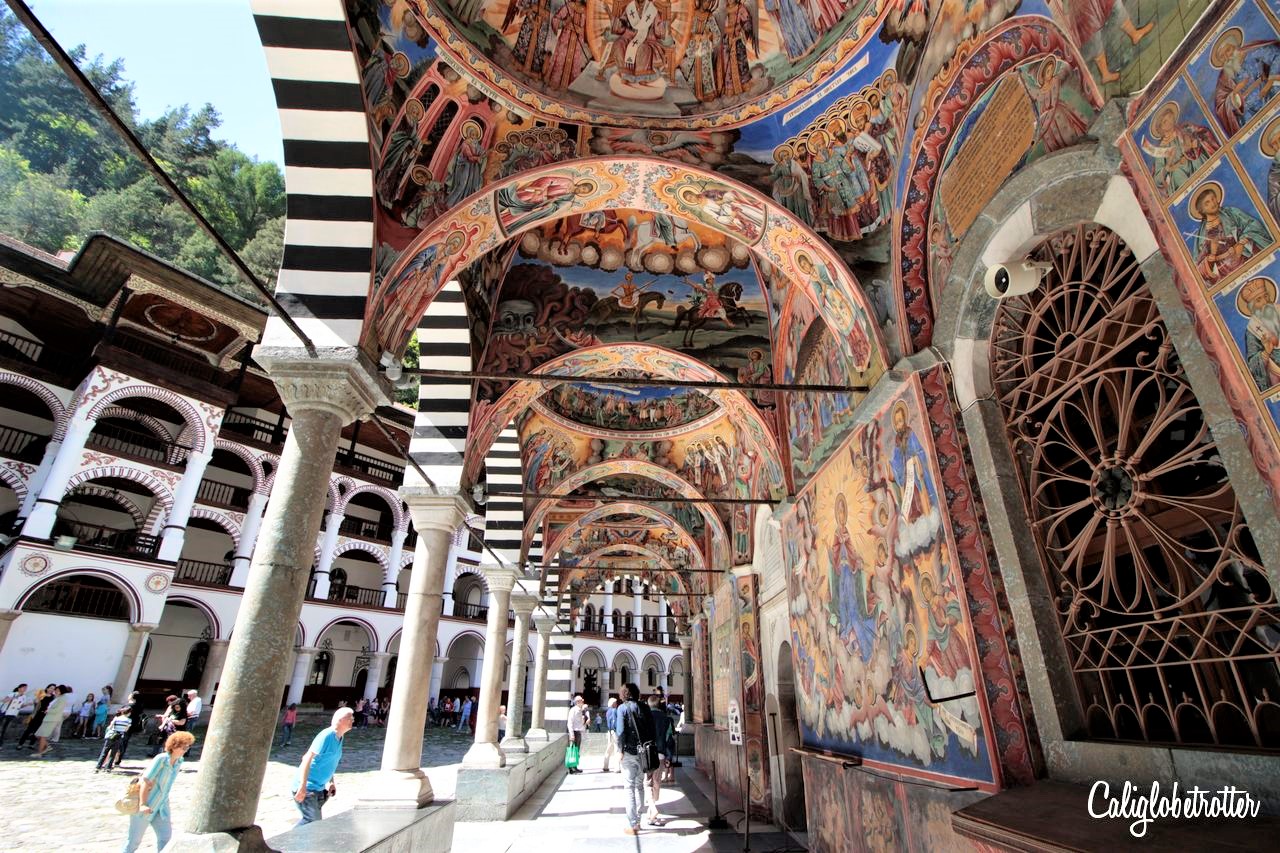 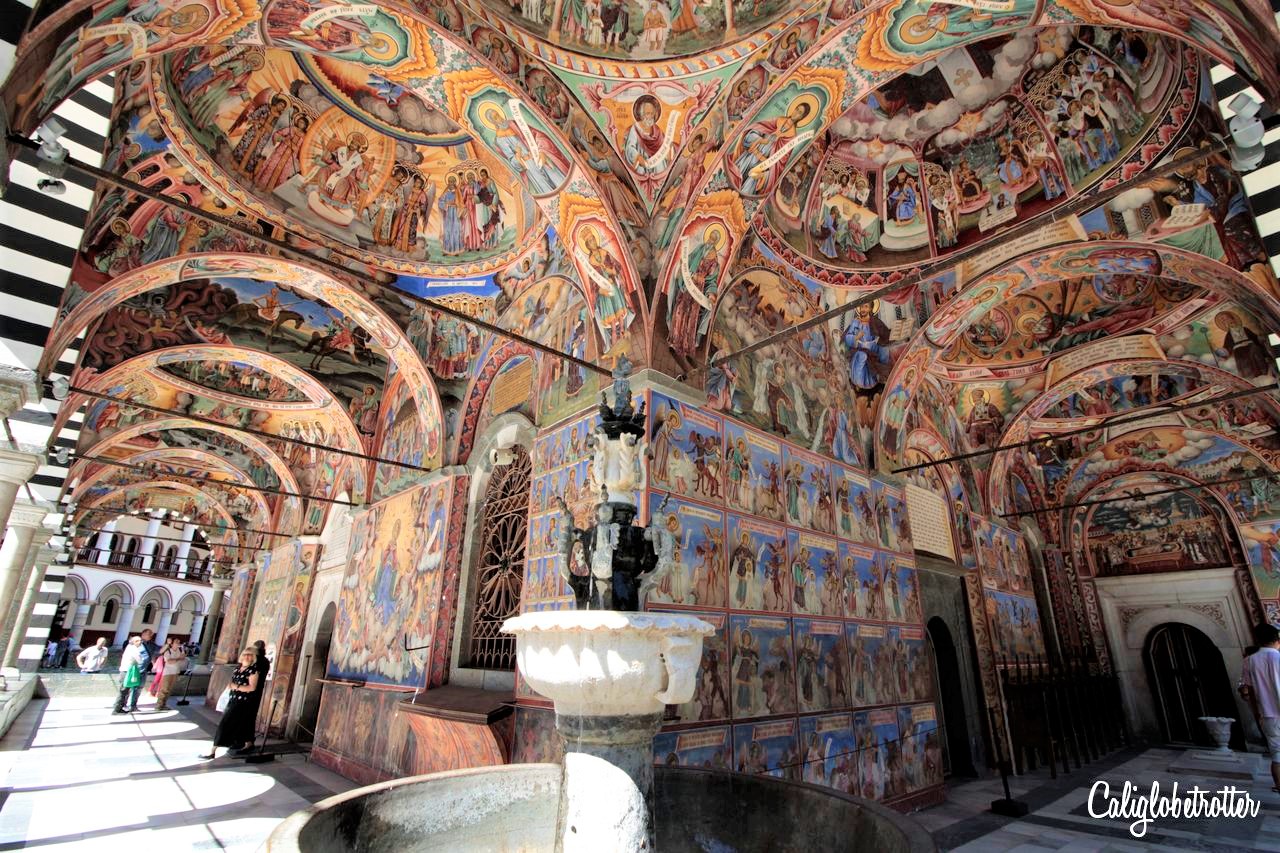 Pictures are allowed in the courtyard and the archways of the church, but not in the inside. Don’t even think about trying to sneak a picture either as there is a monk at all times walking around, eyeing everyone, making sure everyone is sufficiently dressed and obeying the rules.

How to Get to Rila Monastery

Upon arriving in the town of Rila, we soon discovered that we still had a ways to go, as the monastery is deep within the Rila Mountains. There are signs along the way guiding you further into the mountains. After another 30 minutes driving along winding roads, following the Rilska River, before it suddenly appeared out of nowhere.

The easiest way to reach the monastery is by car.

Know Before You Go 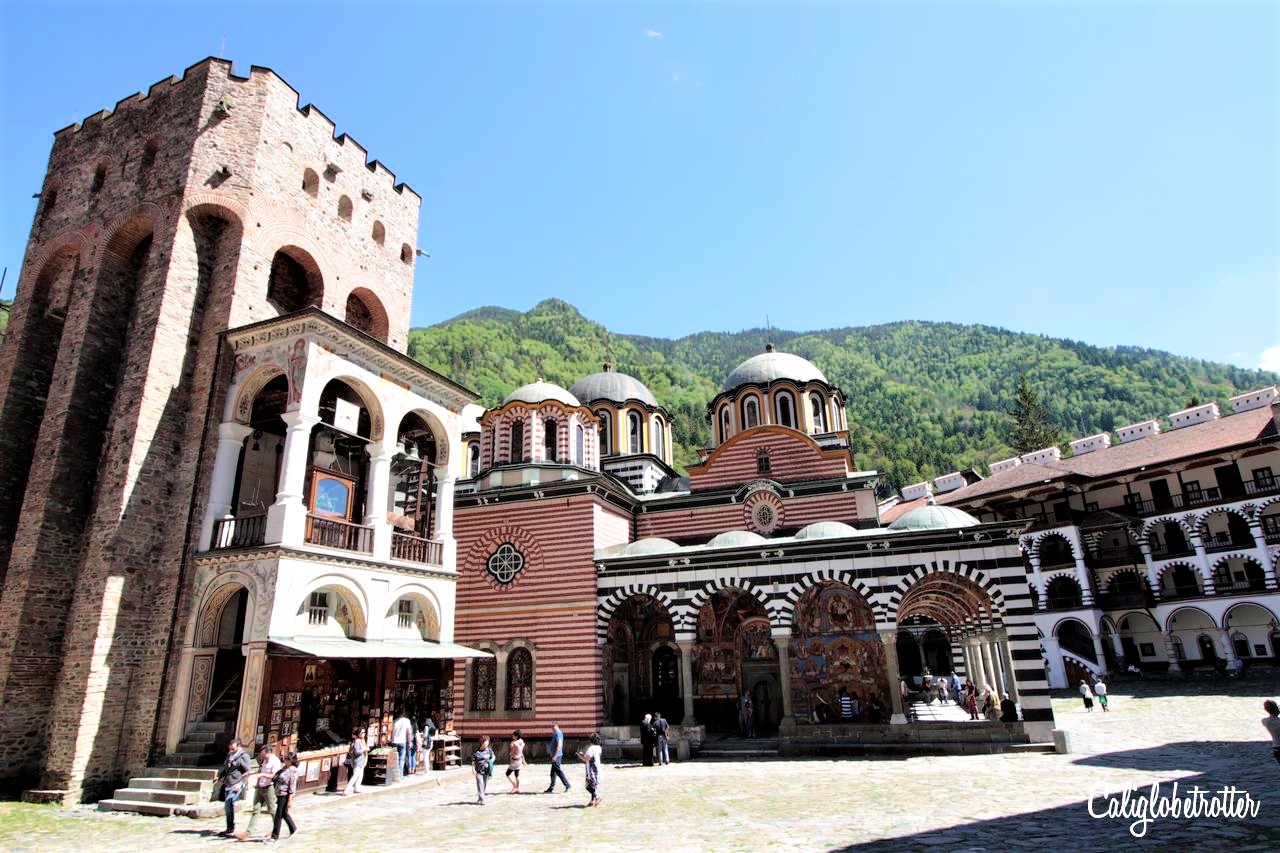 Head Over Heels in Love With Plovdiv, Bulgaria

Replies to Exploring the Crown Jewel of Bulgaria: Rila Monastery