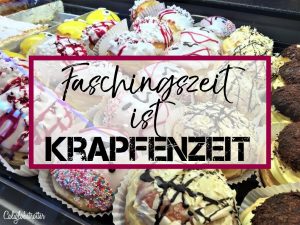 Come the beginning of February, a cold and chilly month, the typical stereotype everyone knows about Germans being very serious and to-the-point quickly turns into one of the few times Germans cut loose and have a good time! What’s typically known as “the season of fools” would be an understatement. Germans break out every wacky and tacky costume they have, join or watch exciting and sometimes shocking parades and enjoy as much food as they possibly can before the beginning of Lent. Fasching for Germans is like Halloween for Americans.

Depending on what region of Germany you’re either from or have visited, what we call ‘Mardi Gras‘ in the States can be called either Karneval, Fasching or Fastnacht. Carnival celebrations start on November 11th at 11:11am but cease during Advent and the Christmas season. Then on Three Kings Day, January 6th and the twelfth day of Christmas, carnival celebrations resume. The Thursday before Faschingdienstag (Fat Tuesday) is known as Weiberfasching – a day where the women take the reins! Typically, Carnival is a week-long celebration known as “Crazy Days” that commences 52 days prior to Easter which included colorful parades on Rosenmontag, the Monday before Ash Wednesday which marks the beginning of the solemn Lent period.

Quite famously, the largest and wildest Karneval parades take place in Köln (Cologne), Düsseldorf and Mainz, each loaded with hundreds of themed floats and revelers dressed in costumes all participating in the fun!

Again, depending on the region of Germany you visit, a Krapfen can also be called Kräppel, Kreppel or Krebbel(chen) however in other areas it’s known as Fastnachtsküchelchen (literally little Karneval cakes) while in Berlin they’re called a Berliner but in eastern states they’re known as Pfannkuchen. Traditionally they come sprinkled with powdered sugar or filled with jelly while sometimes, they can get quite fancy with a variety of flavors. A mean joke that is often played, is filling them with mustard instead of jam.

But WHY do Germans eat Krapfen like crazy during Carnival?

Well the answer dates back to the religious meaning behind Mardi Gras and Lent. The Tuesday before Lent is about preparing to fast and to give up meat and fatty foods, for example.  The word ‘Carnival’ itself has to do with “carne” or “meat”, so the meaning is similar to Mardi Gras which means “fat Tuesday” in French. Basically, the time leading up to Faschingdienstag (Fat Tuesday) is an excuse to eat whatever you want without any regret before giving them up the next day.

Here are the Krapfen I bought this morning which inspired this blog! 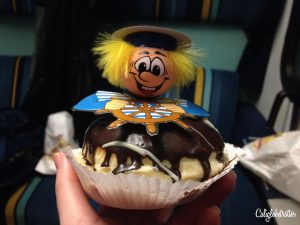 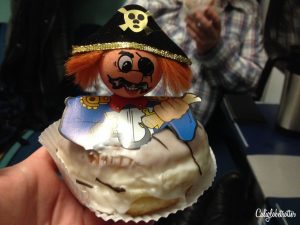 A Krafen is, like I said, a delicious, mouth watering, creamy goodness, sweet smelling jelly donut. The most common and traditional Krafen is filled with apricot jelly or raspberry jam and dusted with a coating of powdered sugar. Other forms of this heavenly desert are filled with chocolate crème, eggnog custard, champagne custard and many other fillings and sometimes covered in white chocolate, milk chocolate, poppy seeds and more. Some get pretty fancy! 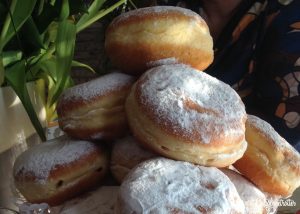 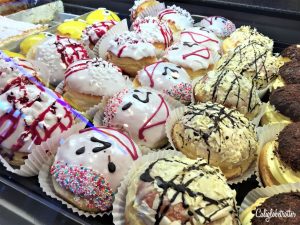 Many Carnival parades take place every year from Nice, France to Aalst, Belgium to Italy and even Cologne, Germany! No matter where you go, people dress up in the craziest costumes. Large parade floats are paraded down streets, often with political satire to other hot topics of the year which are typically quite controversial! 2017 was a year full of political satire against the United States and #45 which was quite difficult as an American to witness. I wasn’t sure whether I should laugh or cry at the brutal honesty.

In Germany, political figures like Angela Merkle and Donald Trump received the brunt end of the jokes while other figures included Marie Le Pen from France and Geert Wilders from the Netherlands. The theme of the year was comparing all the populist leaders (excluding Merkle) to Hitler but with blonde hair, or the more controversial issue of building a wall between the United States and Mexico and who would pay for the wall.

Köln (Cologne) is renowned for having quite crude political satire floats, which they themselves spark even more controversy but often result in a good laugh. Definitely not a place to take children! However, criticizing politicians is an essential part of Carnival in Germany and those who make their indelicate floats take it as a badge of honor. Politicians must either learn to take a joke or simply ignore it. 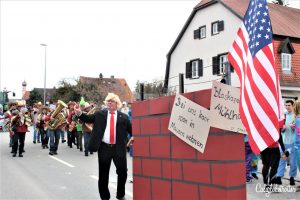 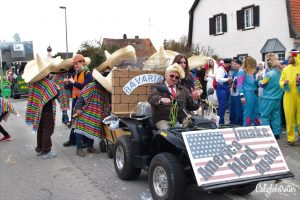 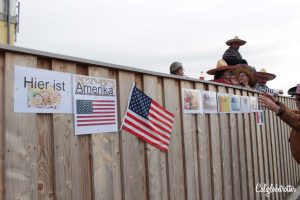 Other times, local groups, clubs or bands join together to bring attention to their organization or business, also participating in the fun of dressing up! Often they throw candy or offer free shots to bystanders watching the parade! 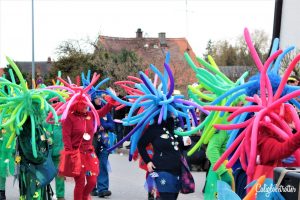 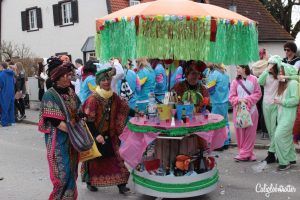 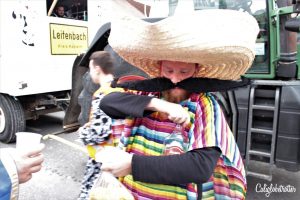