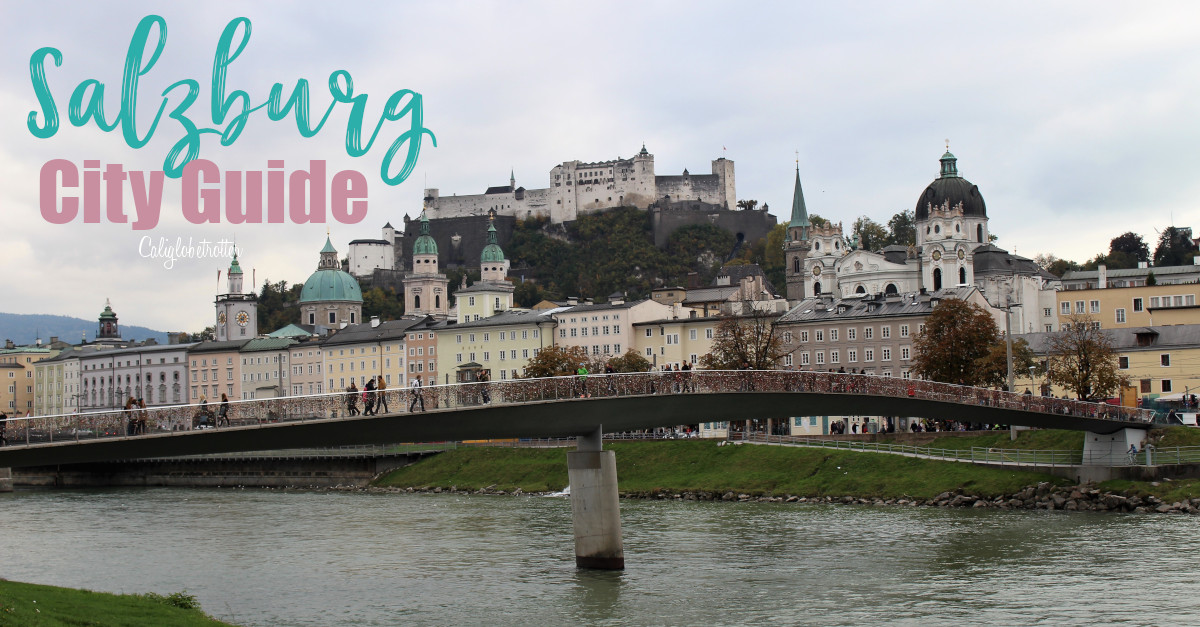 If you’ve ever seen the Sound of Music, then you’ll likely want to visit Salzburg and frolic through the hills in the footsteps of Julie Andrews. As a fan myself, as a short weekend trip from Germany, Salzburg was a great city trip. But for those who plan to do a road trip through Austria, Salzburg is an easy day trip from Vienna and has many things to do!

Planning a visit to Salzburg? PIN IT FOR LATER!!

Just across the border from Bavaria, Germany is the charming town of Salzburg which lies along the Salzach River. The town is the birth place of one of the world’s most influential classical composers, Wolfgang Amadeus Mozart as well as one of the most famous Academy Award winning classic films,  the Sound of Music, mostly beloved by English speakers. Due to its compact size, Salzburg takes for an easy weekend trip loaded with sightseeing in town as well as finding filming locations used in the film the Sound of Music.

The Salzach River & the Makartsteg Bridge

To begin a city trip to Salzburg, a great place to start is along the Salzach River. The city straddles both sides of the river, but for one of the most beautiful views of the entire town is from the northern side of the river, facing the Hohensalzburg Fortress. The Makartsteg bridge is a simple pedestrian bridge but is a place for lovers to continue the tradition of permanently locking their love on the bridge and throwing the key into the river below. If you’re not familiar with this tradition, lovers engrave a lock with their initials, lock it on to a bridge and throw the key away, forever preserving their love for one another. 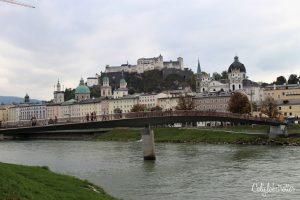 The history of love locks dates back over 100 years to the First World World and the tale of a melancholic Serbian in the spa town of  Vrnjačka Banja in Serbia. A young woman named Nada fell in love with a Serbian officer, Relja, before he left for the war. He was shipped off to Greece where he would eventually fall in love with a local woman from Corfu. The two broke off their engagement, but Nada never recovered from the heartbreak. Young women in the city began to write their names of loved ones on padlocks and locking them on the Most Ljubavi (lit. the Bridge of Love) where Nada and Relja used to meet to protect their own love stories from having the same terrible fate. 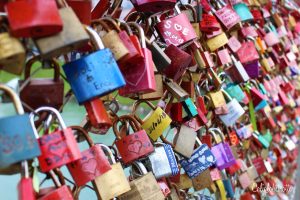 Getreidesgasse & All the Adorable Signs!

Upon walking into the Old City Center, you first see a line of shops on Getreidegasse which is one of the longest streets in Salzburg and is popular because of the wrought-iron guild signs that hang above every shops. Even the McDonald’s has a special wrought-iron sign. At the end of the street is a small church built into the side of the mountains called Blausiskirche. Wolfgang Amadeus Mozart also lived on this street. Walking down this street is without a doubt one of the best things to do in Salzburg as it’s one of the most unique streets in Europe!

Between St. Peter’s Abbey and the Salzburg Dom, you can find one of two Pferdschwemmen (horse fountains) which was built in 1693. The Archbishop’s horses were washed here, but today has no specific use. It’s just a pretty area now in Salzburg, dominated by the “horse whisperer” statue. 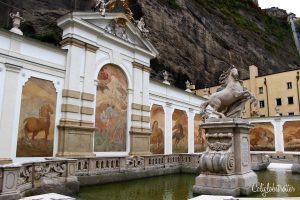 There are three huge squares that surround the Salzburger Dom. The square at the front of the church, a square on the left and on the right. The one of the left, in the Residenz Platz is dominated by a huge baroque water fountain called ‘Residenzbrunnen’ and is one of the largest in Middle Europe. The fountain is stunningly sculpted with massive horse-fish. 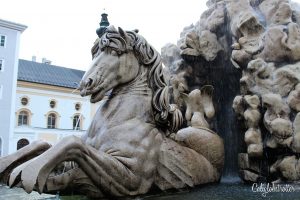 Soon you come to the Kapitalplatz which is where the Salzburger Dom (Cathedral) is which was built in the 8th century and was Salzburg’s first cathedral. It was built to hold 10,000 people – that’s more than the entire population of Salzburg! Unfortunately, the Dom was partially destroyed during WWII when a bomb dropped directly on the dome. The church was closed and was finally reopened in 1959. This cathedral reminded me very much of the one in Passau, especially on the outside. They looked very similar! 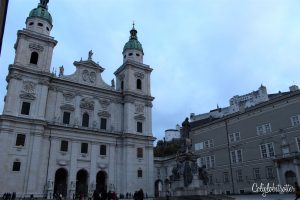 The other square, called the Kapital Platz, has a horse pond where horses could once again, be led into the pond for bathing. Here, there is a statue of Neptune, the god of sea, holding a trident and a crown riding a seahorse spouting water. From here, you will have a great view of the Hohensalzburg Fortress perched above the town. 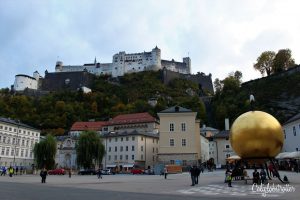 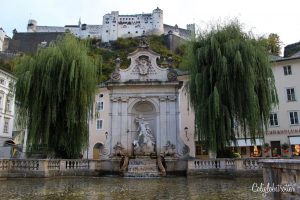 From just behind this square, you can find the BergBahn (Cable Car) that will take you up to Hohensalzburg. Just a bit further, we found steps leading up into what looked like a housing district which had a walking path. We decided to go up and stroll around and see what kind of amazing views we could find over Salzburg. For such a small town, Salzburg has a lot of BIG churches crammed into it!

Just around the corner was an interesting cemetery behind a the Stift St. Peter Church. Now, I am not one to walk through cemeteries unless I am visiting a loved one, but this was by far one of the most unique cemeteries I have ever seen. So we took a little stroll through it. 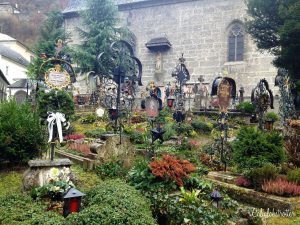 Then we found our way up to the Hohensalzburg, which is a large fortress perched at the top of a mountain and is one of Salzbur’s main attractions. The best way to reach the fortress is by riding the funicular from Festungsgasse. From the top it offers some of the best views of Salzburg. Naturally, we had to do the tour which I found incredibly boring because you had to rent audio guides rather than have a real tour guide. I loose focus easily with this things. But thanks to my tour guide book, I learned that this fortress was built in the 11th century during the wars between the Holy Roman Empire and the Papacy for the archbishops whenever they felt threatened. 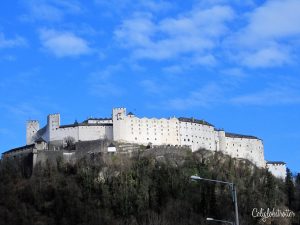 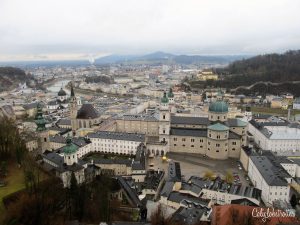 Coming down the hill from Hohensalzburg, we found Stift Nonnberg which is a nunnery which was founded in 714. It was here in the movie the Sound of Music where Maria joined the Nunnery and eventually left to become a governess to the seven children of a Navy Captain Georg von Trapp. (For those of you who don’t know this, the movie Sound of Music is based on a true story!) Unfortunately, parts of the abbey are closed to the public and so you can not see the cemetery where Maria and the family hide at the end of the movie from the Nazis. But you can see the original gate where the von Trapp children came to beg to see Maria. Obviously I took a picture! 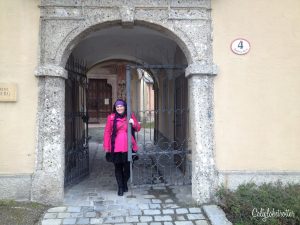 Then we went across town to Schloss Mirabell which is now just a normal civic building. But there was only one reason why I wanted to go here: Sound of Music! There is a scene in the movie when they are singing Do-Re-Mi and dancing around a fountain and end the song climbing some steps. Obviously I took another picture here!


We decided to stop and have a coffee and cake, something that is very European. Hans really wanted to go to Café Sacher, one of the historic coffeehouses in Salzburg which is a 180 year old café that still uses some of it’s original recipes, which includes the Sacher Torte. So now I can say that I have had a 180 year old cake! But don’t worry, it didn’t taste that old! 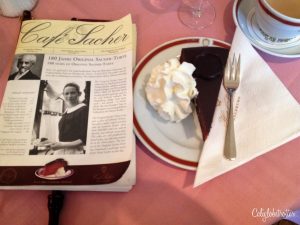 The next day, we got up early and found our way to the Leopoldskron Palace which is the house that was used in the movie the Sound of Music for the scene in the backyard when the children and Maria fall into the lake while singing. The house is privately owned and still used, therefore is not accessible. There is however  a spot across the lake which offers the best view of the back of the house. 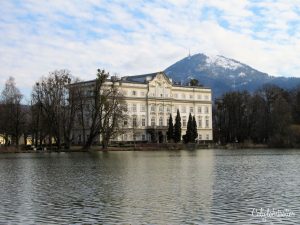 Next we took a bus and walked a bit in order to get to the Hellbrunn Palace where the Gazebo was rebuilt especially for the fans of the movie. Unfortunately, you cant go inside the Gazebo but can get right up close to it and look inside. So you’ll just have to pretend to sing 16 going on 17!

The most magical part about visiting Salzburg definitely has to be the evenings where the city starts turning on its lights and you can see the Hohensalzburg lit up, perched above the town, standing guard. 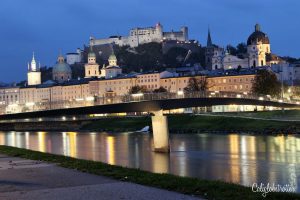 Where to Stay: Motel One Salzburg-Mirabell ⭐⭐⭐– Motel One is one of my favorite chain hotels in Europe with my my favorite style decor! The hotel is incredibly comfortable and in a great location making it easy to get around!

Other blogs from Austria:

The Colorful Alpine Town of Innsbruck

A Delicious Guide to Coffee & Cake in Vienna 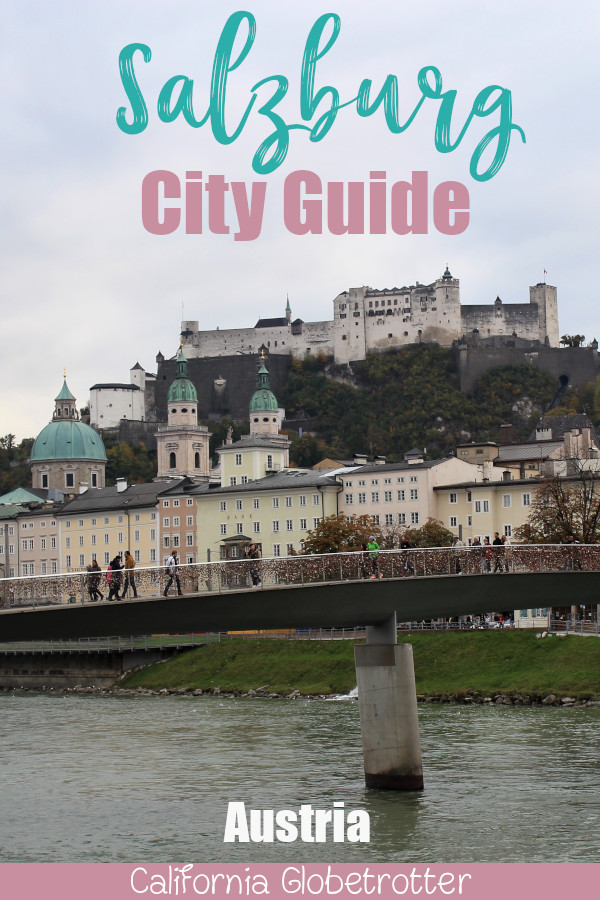