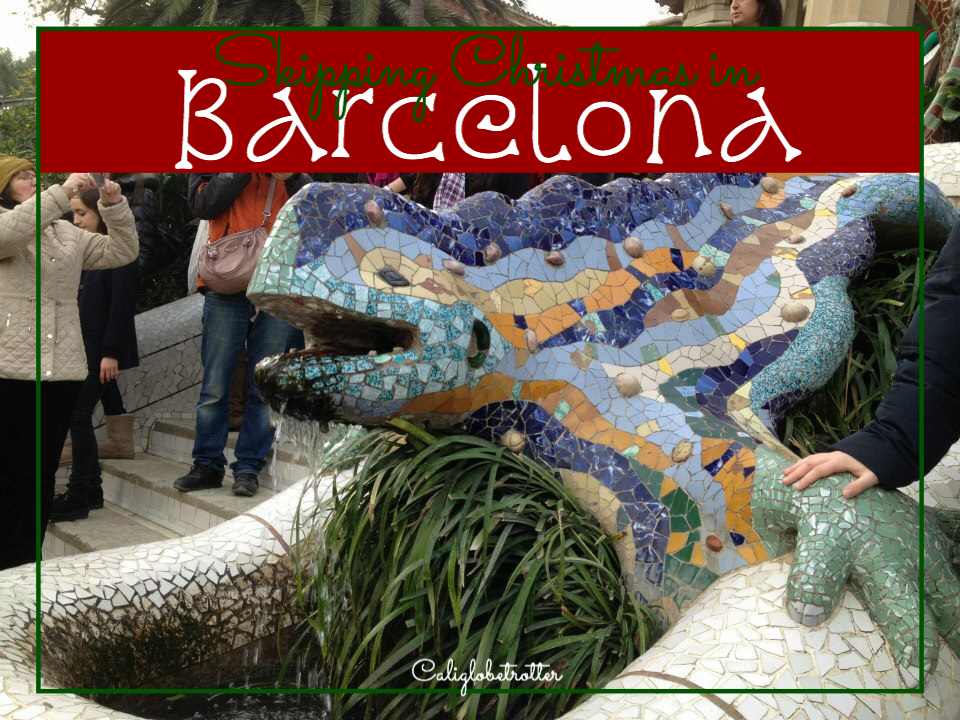 After moving alone to a new country, and settling in a few months before the big holiday season, there is a high possibility of coming down with “homesickness”. And when all of your roommates and your few friends you have made have all gone home and your family lives half way around the world, the last place you want to be is alone on Christmas.

When a friend mentioned that she was headed to Barcelona, Spain for Christmas instead of spending the holiday alone, I instantly knew that I had to join this trip. Somewhere slightly warmer than the rest of Europe, tapas and dancing it seemed like the perfect trip to take to forget about the holiday season. So I quickly booked my ticket and met her there!

Here’s how to ignore the Christmas holiday season in Barcelona: 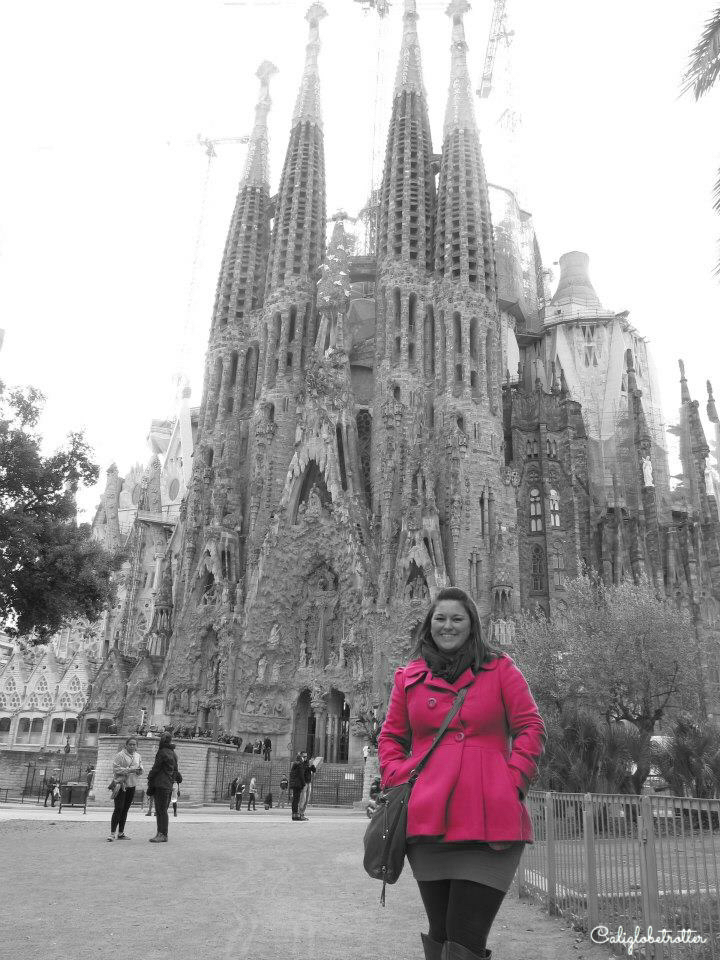 It is by far one of the most UNIQUE cathedrals I have ever seen in my life, designed by the Spanish architect Antoni Gaudi. Although the church will take another 60 years to complete, it is already a UNESCO World Heritage site.

It’s not often in Europe you get to see something still being built as compared to always finding something, somewhere being renovated.

This was one of the most artistic cathedrals I have ever been in and I found myself not wanting to leave!

Take a Gander in the Picasso Museum 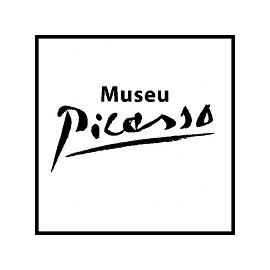 When in Barcelona, everyone should make some time to visit the Picasso Museum. Pablo Picasso was a Spanish painter everyone at some point in their lives have heard and learned about.

We were lucky. Normally there are long lines to get into the museum, however, seeing and all it was the holiday season, there weren’t many tourists. We were able to walk right up and buy a ticket!

Like the Van Gogh Museum in Amsterdam, I was excited to see some of the work, but knew I would be disappointed in the fact that I wouldn’t be able to see his most famous work of art because it would likely be in the Metropolitan Museum of Art. Nonetheless, there was plenty of work from Picasso from throughout his life which included sketches, paintings and sculptures. Unfortunately, no pictures are allowed.

Journey up to Tibidabo

Tibidabo is a mountain that over looks all of Barcelona dominated by  the Church of the Sacred Heart of Jesus. There is even a small amusement park at the top, perfect for families with children. It’s a doubly whammy – something historic and awesome for the adults and some fun for the little ones!

It was a bit of a trek to get here as we had to take a bus to a train station and then exit to take a funicular which opened in 1901. (Here are directions)The park here is one of the oldest in the world that is still in use.

It was such a nice, clear day! You could only stand to be up there on top for a bit because it was windy and a bit cold. It offered some of the best views over Barcelona, so it was definitely worth the trek across town!

Do a Bike Tour

If you’re in Barcelona for only a limited of time, but want to quickly see as much as possible and the weather is nice, I highly recommend doing a bike tour. Our bike ride was mostly the lower part of Barcelona. This is where we learned that most of the Barcelona coast line didn’t exist before 1992. It was all built for the 1992 Olympics. Even the beach is man-made and the sand is imported from Egypt. And let me tell you now, its not that soft.

Another amazing piece of architecture designed by Antoni Gaudi which is decorated in colorful mosaics and the roof is arched like that of a dragon. As many of the buildings in Barcelona are extremely unique, they give an atmosphere of beachy elegance. Unfortunately, since we were on a bike tour, we didn’t have the time to go inside and check it out. 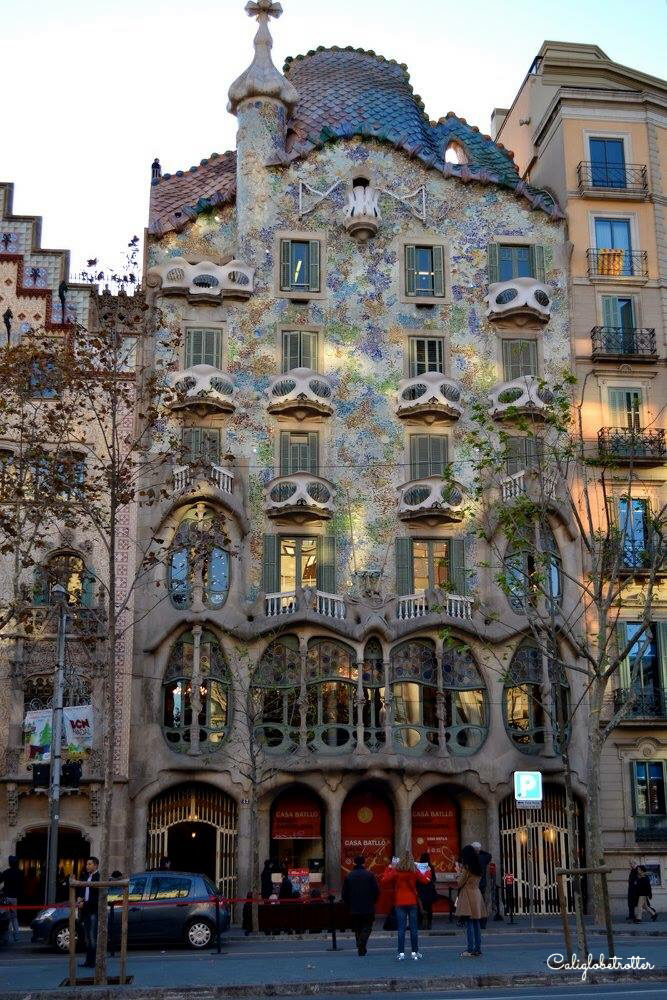 We spent a good portion of our time actually playing volleyball on the beach. I know, you’re thinking, “What! It’s cold in December!” Yes, it is but temperatures in Barcelona near Christmas are surprisingly warm during the day, making it the perfect temperature to play at the beach. Now, it’s definitely not sunbathing season, but temperatures are certainly nice enough to have a snuggle on the beach. However, come night fall, it does get a bit windy and a tad chilly.

Eat Tapas Preferably with some Sangria!


To be honest, I had never heard of Tapas or even knew what the heck it was prior to visiting Spain. Mind you, this was my first visit! But I quickly learned JUST how delicious it was! 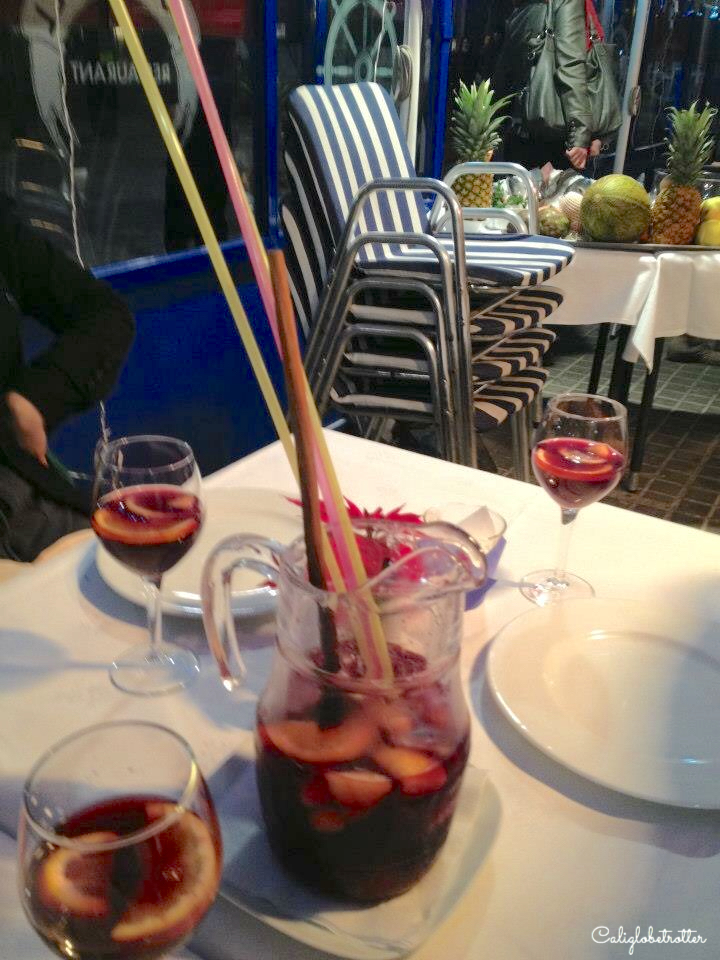 Locals head to Tapas restaurant bars for to snack on light, delicious food before a night of heavy partying. Usually, dinner time in Barcelona is later in the evening than many Americans would like to eat. While we sat down to eat around 5pm, it was clearly not dinner time for the locals. It wasn’t until around 8-9pm that the locals started creepin’ out of their homes, heading to dinner before a night of dancing and partying!

I highly suggest trying the following:

Obviously, this isn’t the entire Tapas menu, I’m not a restaurant, however, I suggest ordering about 2-3 dishes each and sharing so that you can try a little bit of everything. Don’t worry they aren’t huge dishes! Remember they are light snacks.

Hang out at your Hostel on Christmas Eve

Ok, so you can’t compleeetly avoid Christmas in Barcelona and you certainly can’t be a scrooge about it either. It is unavoidable. So,what you can do since everything will now be closed early and people are heading home for the night, you can hang out at your hostel and make friends with other travelers attempting to avoid the holiday.

We had made friends with some people earlier in the week, and found ourselves hanging out in the lounge area. We went from a group of 5 to a group of 30+ people! We sang Christmas songs in every language from Mexican to American.  The guys had bought 96 beers to share with everyone and we finished every one of them. By the end of the night our group had grown from about 10 people to probably 30-40 other hostel stayers. a 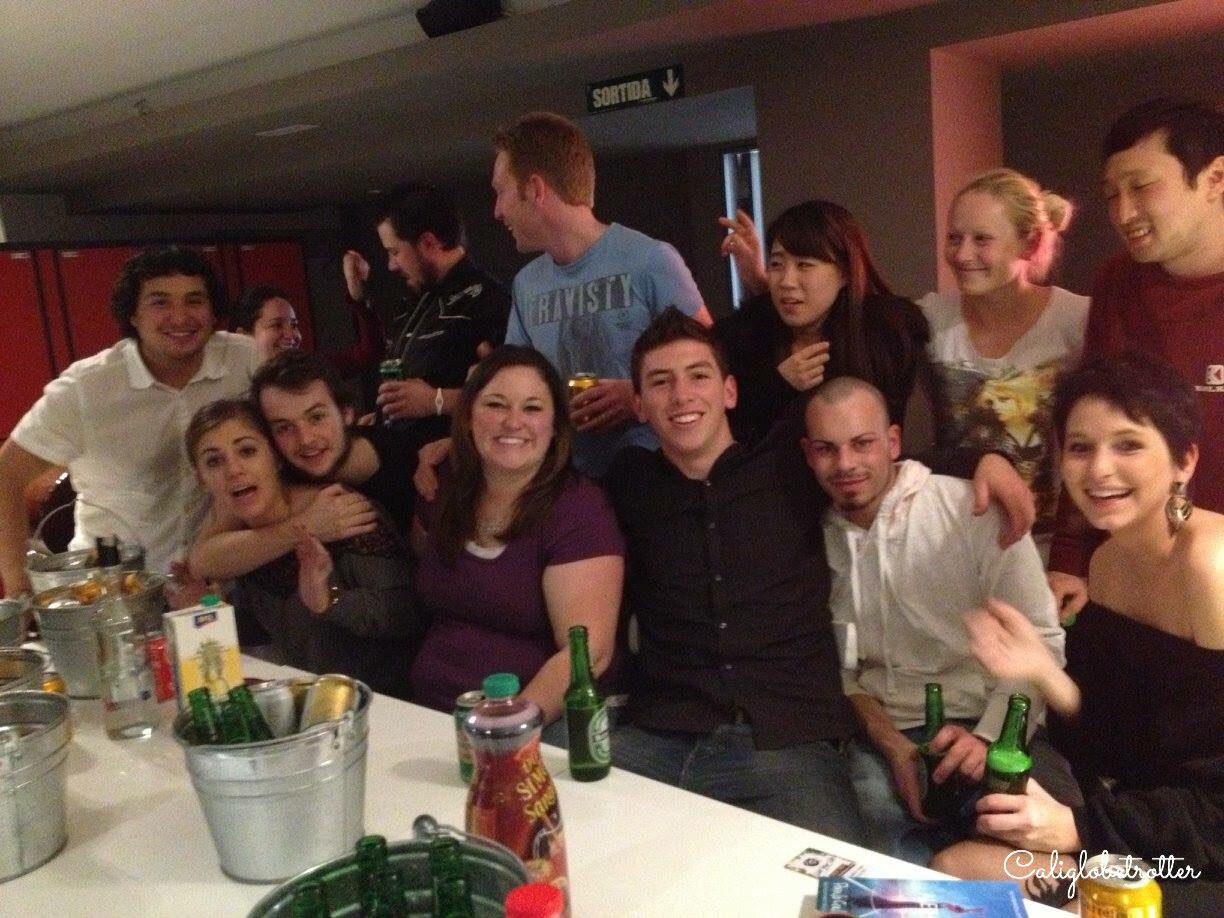 Considering that Christmas is a public holiday and all, it was natural to assume that everything would be closed. Therefore, heading to Parc Güell for the day is the perfect way to take advantage of the holiday. The park is free  to enter and open to the public on public holidays.

It was built between 1900 and 1914 by Antoni Gaudi – the same man who built the Sagrada Familia Cathedral and many other beautiful buildings throughout Barcelona. The mosaics are just beautiful. It was the one place I wanted to get to see before we left Barcelona. It has the world’s longest park bench.   The park also has gingerbread looking houses that were supposed to be built into a little community for people to move into, but the houses didn’t sell and only two houses were built.

Unfortunately, while we were there, one of the houses was being renovated and was covered in construction material. Luckily, at least the other house was not!

Montjuïc is another large mountain where you can find the Olympic Park Stadium from the 1992 Barcelona Olympics as well as the National Museum of Catalonia. We strolled around the two but didn’t go inside either. The whole complex is huge so make sure to bring a map so you know where you are going! Unfortunately, since it was “winter” in Barcelona, the fountains were off at the National Museum. 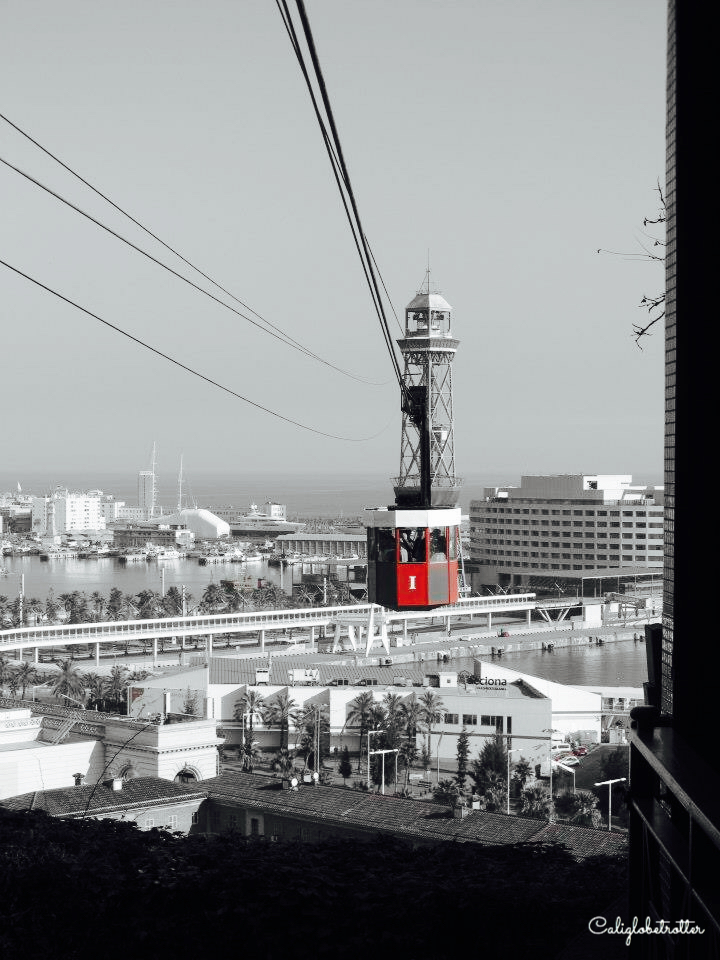 Take the Port Cable Car from Montjuïc to Barceloneta

After walking around both for a while, we took the Port Cable Car that would take us from the mountain right down to the Barceloneta beach strand.

The ride takes only about 5 minutes but offer some nice views over the marina. Naturally, we played more volleyball!

La Ramba is the main street in Barcelona where before 1992 all the locals used to hang, but is now super touristy and has a lot of people trying to sell you things as you walk along. Here you can find lots of bars and restaurants and gift shops to suit your needs.

Along the way is the Mercat de Sant Josep which is a large market place. We were overcome with desire when we found the Catalan chocolate section of the market and so naturally we had to buy some!  The market was amazing, all these different fruits I’ve never seen before that were so colorful. Then we got to the meats section where I was shocked to see the leg of an animal hanging by the foot with the butcher shaving off the meat, to the fish section where the crabs were still alive and the shrimp eyes were moving looking at me with creepy eyes.

Overall, this has truly been one of the greatest vacations I have ever had. I don’t know if it was just the group of people we met who were just so amazing who made the trip fun or if it’s a change in my own behavior to loosen up and be free to have fun again.

It was definitely a great way to forget for a moment that home was too far away to go home for the holidays! Sometimes, you just gotta skip Christmas! But next time, I would love to do some day trips from Barcelona and explore a few places like Costa Brava.

Where to Stay in Barcelona: If you’re wondering where to stay in Barcelona, there are a million options, but if you’re a budget traveler, consider staying at St. Christopher’s Inn, one of the most awesome hostels I’ve ever stayed at located right in the heart of Barcelona! Staying here was honestly the best time I’ve ever had at a hostel as it also has a bar and awesome lounge! 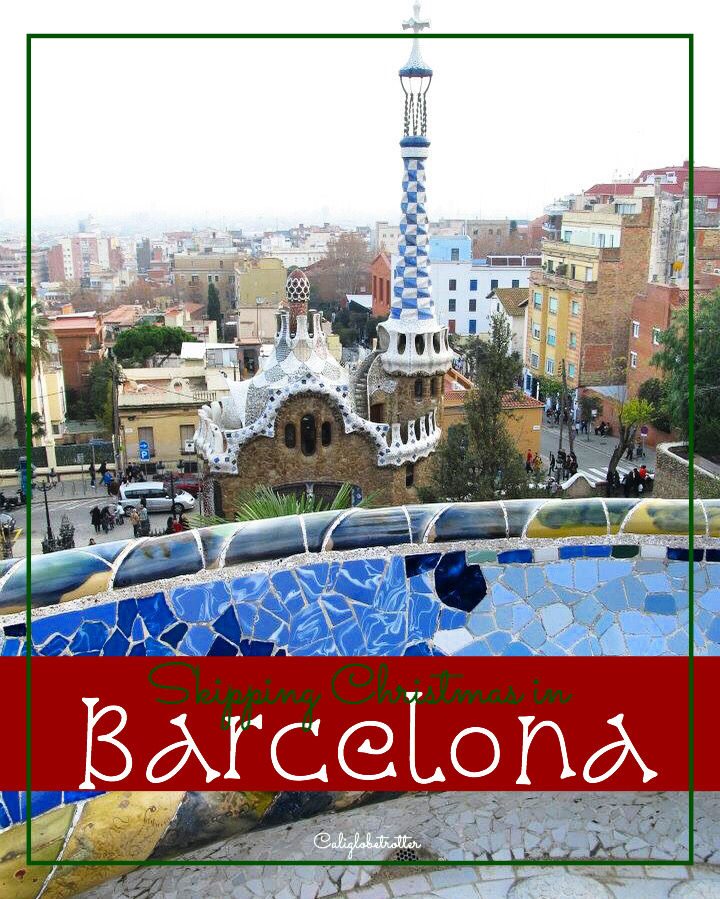 Replies to Skipping Christmas in Barcelona!