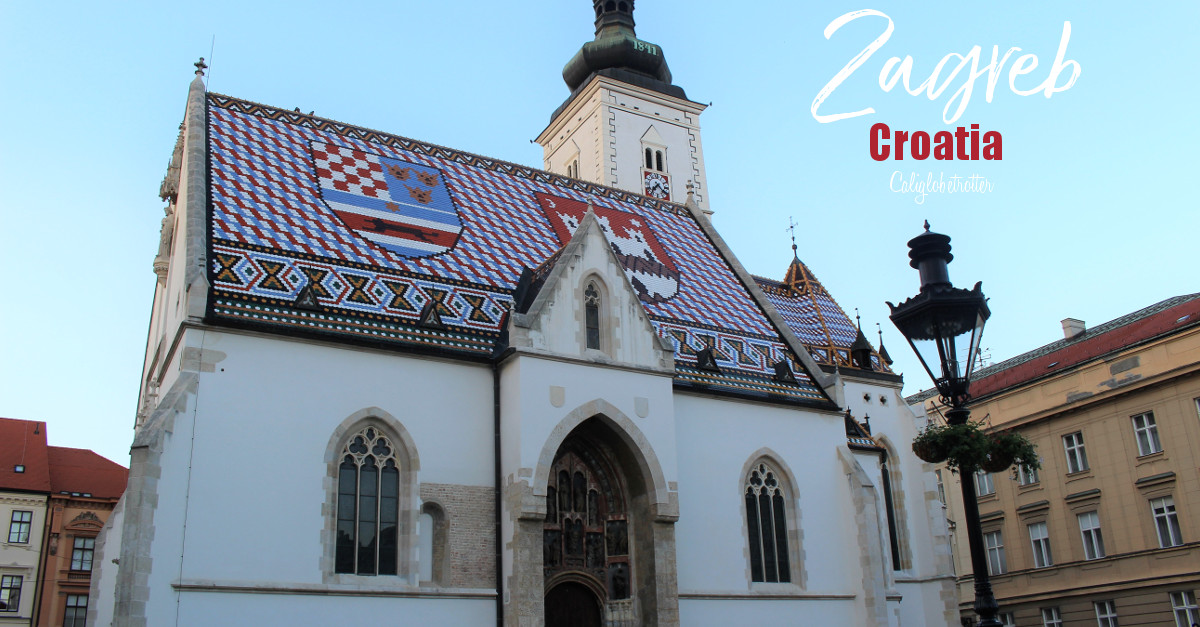 Little did I know prior to arriving that Zagreb would be so much more than just a wham-bam-thank-you ma’am one night stand on our road trip through Croatia. While the capital is in a perfect position for breaking up a long drive, this capital is both youthful and loaded with a long and interesting history! Had I know that, we would have stayed longer than just one night on our long drive back to Germany from Dubrovnik.

Zagreb is actually a combination of two old medieval towns which were built on two different adjacent hilltops. The old town (Gornji Grad), also known as the Upper Town, sits perched up on the hills overlooking the modern area (Donji Grad), or the Lower Town.

Want to visit? PIN IT FOR LATER!!

Surprisingly, during my research about the city, I discovered that Zagreb has been the capital of Croatia only since 1991, however, it had already been the capital of the Independent State of Croatia since 1945. A huge portion of Croatia’s population is here which was extremely surprising after having just driven through almost all of Croatia and see nothing but deserted countryside with a few small towns in between.

Church of St. Mark – The Iconic Church of Zagreb

I’m not going to lie. The main reason why I wanted to check out the capital was to see the Church of St. Mark with its beautiful colored tiles on the roof, with the coat of arms of Croatia, Dalmatia, Slavonia and Zagreb. This church is located in the center of the Upper Town and dates back as far as 1256. It has undergone many alterations over the centuries, and all that remains of the original structure is a small window and the Gothic doorway. Many of the alterations took places after fires or earthquakes caused damage to the church. Unfortunately, while we were here, the church was not open to the public, but you could hear music playing. This is most definitely the number one thing to see in Zagreb!

Ride One of the Shortest Funiculars in the World!

The best way to reach the Church of St. Mark is by taking the Zagreb Funicular, which is one of the smallest public transport funiculars in the world, stretching only 217 feet (66m) up a small hill which one could easily hike up. In fact, we did. The funicular dates back to 1890 and has been used ever since and the locals are absolutely proud of it!

The Tower of Lotrščak & the Daily Cannon Shot

Upon reaching the top of the Upper Town with the funicular, you will stand directly before a tall tower called the Tower of Lotrščak, where every day at noon since the middle of the 19th century, a cannon is fired to mark the hour. Unfortunately, we got there in the early evening and had missed this! You can also climb up the tower for a great view over the city. Again, we chose not to do this as we were running low on energy after a week of sweltering heat and a lot of sightseeing. However, from the courtyard in front of the tower, you are already given a pretty nice view over the Lower Town.

Surrounding the Church of St. Mark are many official looking buildings. Turns out, the building on the right of the church is Croatia’s Parliament building which dates back to 1910. Apparently, Croatia’s independence was proclaimed from the central window in 1918. I guess this is why two flags hang here, one making the newly independent country of Croatia and the other for having joined the Eurozone. The building on the left is Ban’s Palace, which dates back to the 17th century. This building was originally the seat of the Ban, or the governor of Croatia and but is now the home of the President. 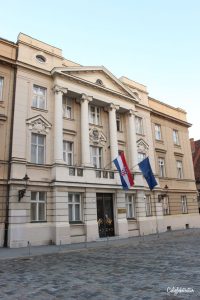 The Most Interesting Place of Prayer – The Stone Gate

From here we meandered down a small hill to the left of St. Mark’s Church and stumbled upon a little arched walkway. Unfortunately, it was covered in scaffolding so we weren’t sure what we were seeing until later. We were surprised to walk under the archway and find people sitting in pews in the corner with a street in the middle separating the pews from the painting of Mary with Child. It was an odd place to put such a thing and we were confuzzeled. Turns out, this little building is actually the Stone Gate, which is the last of 5 gates from the 13th century. The reason for this little area of prayer was because in 1731, a fire destroyed all the houses in the area except for a painting of Mary with Child. So a little chapel was built around the painting. 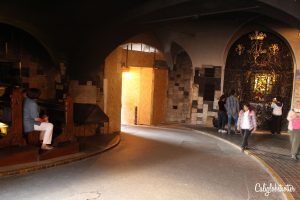 After walking a little ways, we ended up on a busy pedestrian street, on Ul. Ivana Tkalčića, where we found many bars and restaurants with live music. Every 20 feet it seemed like there was a new musician singing between the restaurants from Elvis to Johnny Cash.

We didn’t make it very far down the street when we finally plopped down at one of the first restaurants we found seating available in. We sat down at a huge restaurant called Pivnica Mali Medo. Again, we had traditional Croatian food with two different meat platters. I have to say that the beer, which is produced here as well, and the food were both delicious. However, I had a little problem with my meal as I found a long plastic wire in my food. Just know, you’ve been warned! 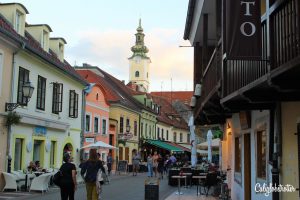 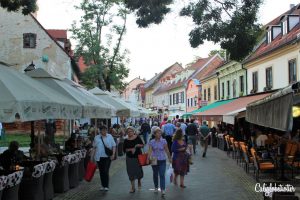 The Cathedral of the Assumption of the Blessed Virgin Mary

After this, we headed over to the main cathedral: The Cathedral of the Assumption of the Blessed Virgin Mary. Good god that was long winded! Unfortunately, as it was already going on 9pm the cathedral was closed to the public, but we did get to wander around it and enjoy its glory, even with scaffolding on one tower in it’s golden glory.

Chillax at one of the Many Awesome Bars

Then we eventually made our way back to the hotel, passing bar and restaurants, one after the other which lined street after street. I was surprised to see how chic and hip Zagreb was. From our hotel to the restaurants, you can tell that Zagreb is the new, up-and-coming hipster capital of Europe. At one point, we even passes a small lounge bar with big cushion pillows and lamps and rugs spread out in the square. It was so hip looking, I was tempted to stop for a drink as it looked like the coolest bar in Zagreb! 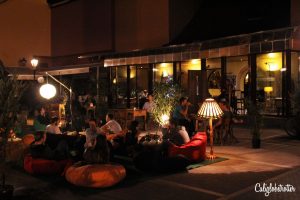 Where to Stay: ZigZag Zagreb ⭐⭐⭐⭐– For a hip and modern apartment style stay, within walking distance of the city center and chic restaurants and cafes, this is the place to stay!

with a detour to Mostar, Bosnia Herzegovina! 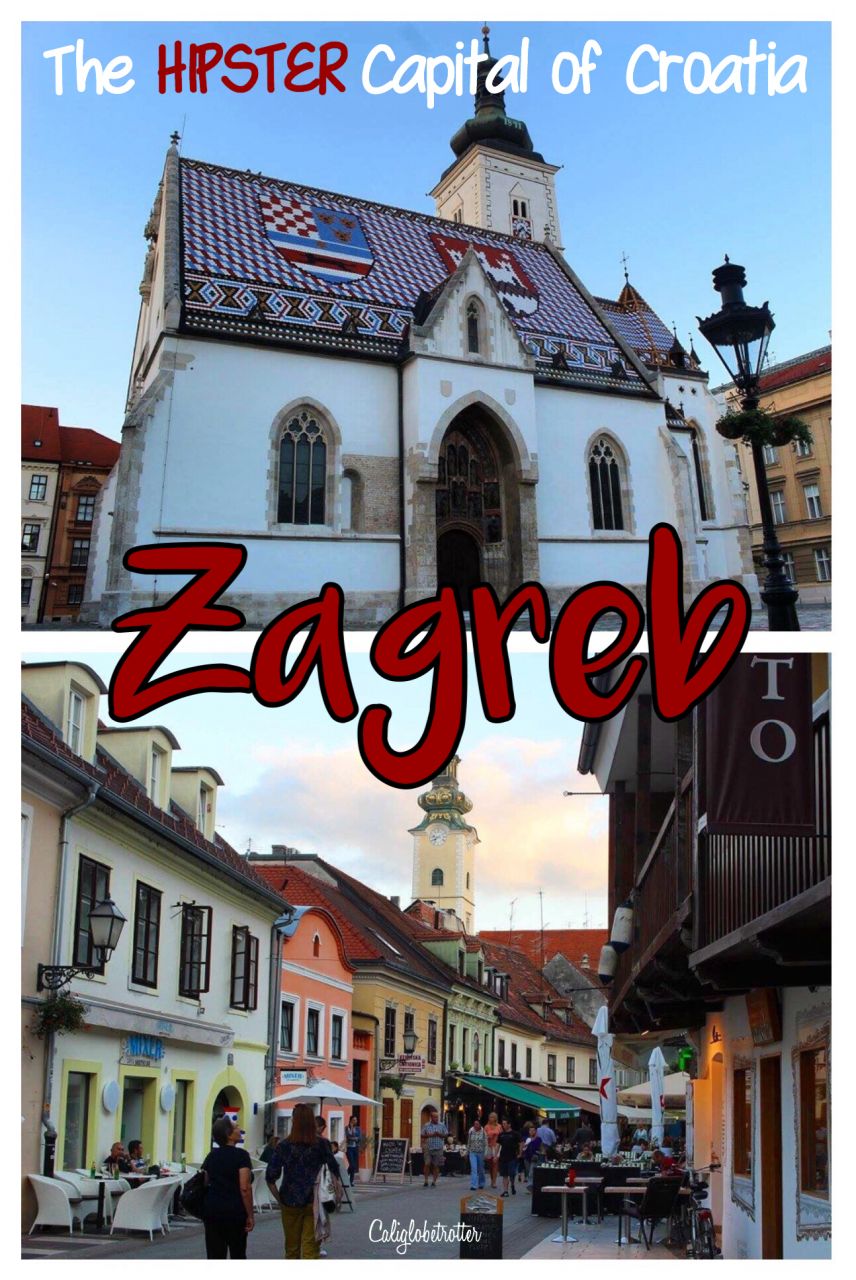 Replies to The Hipster Capital of Croatia: Zagreb!