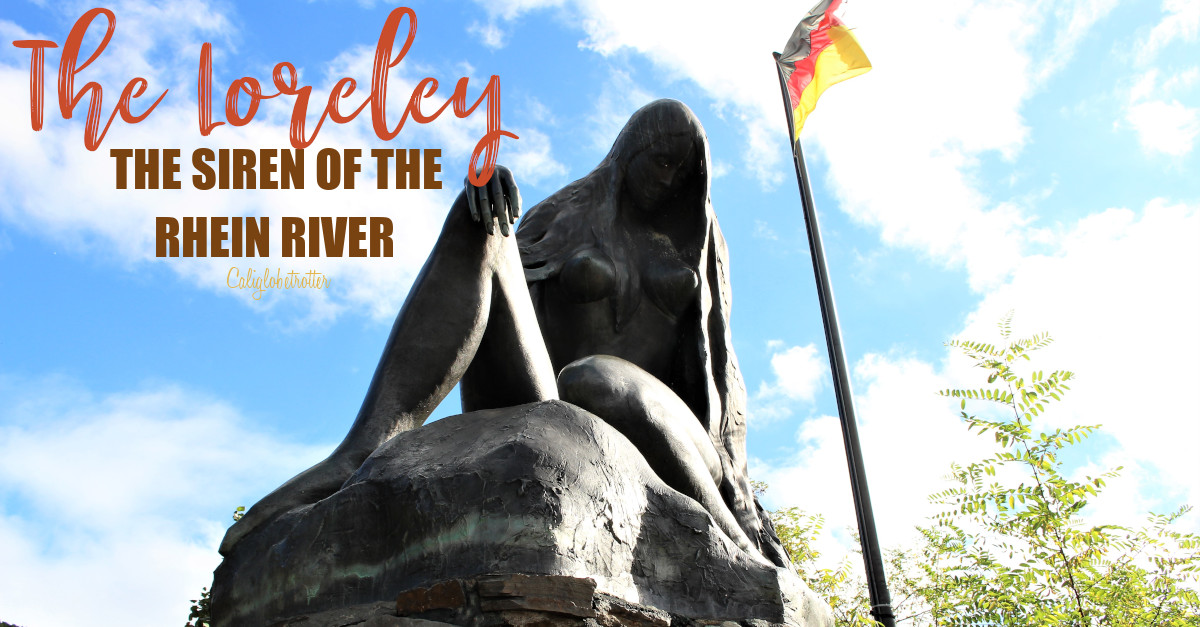 There is a legend in Germany, that takes place along the Rhine River of a beautiful siren who sang lovely melodies while combing her golden blonde hair, but because it is at the deepest and narrowest point of the entire Rhine River, it is extremely dangerous for ships to pass. The Loreley bewitches the hearts of all sailors with her enchanting voice and beauty. Looking to catch a glimpse of the woman whose voice has charmed them, they would forget about the dangerous rapids and soon their boats were crashed and sunk beneath the waves forever.

Well, I hope I have that effect on men! Or at least enough to make them turn and stare at my beauty! 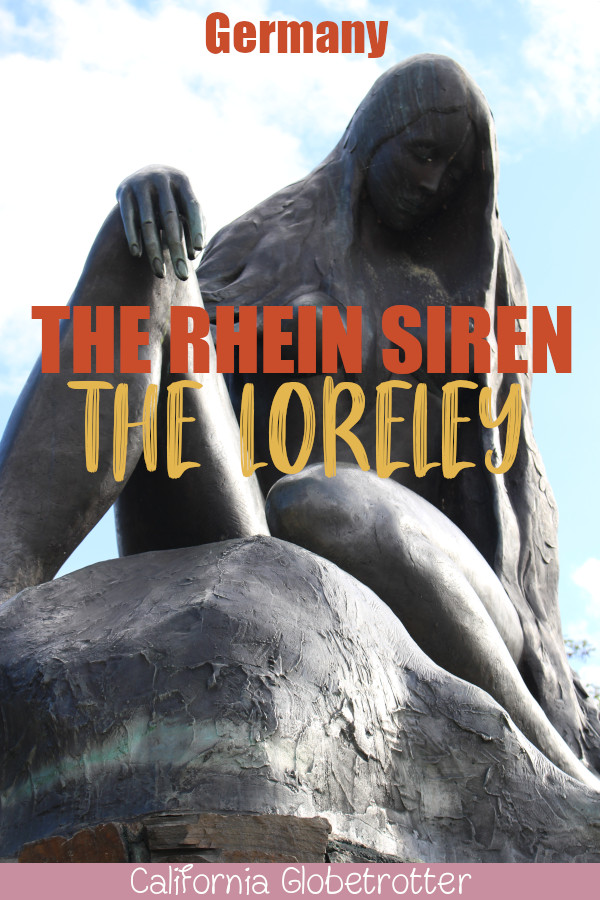 My first name is Lorelei. I was named after my mother’s middle name which my grandma had given to my mother. As to where my grandma found the name Lorelei, I have no idea. As to why she gave it to my mom, I also sadly have no idea. However, my father loved my mother’s middle name so much, I was blessed with the unique and very uncommon first name of Lorelei.

It wasn’t until I was in the 8th grade and I switched from learning Spanish to German that I learned my name was German and came with a story.  Ever since that moment, every other person upon learning that my real name isn’t just “Lori” but Lorelei, they always ask me if I have ever been to, seen, know of the Loreley am Rhine and the story behind it. 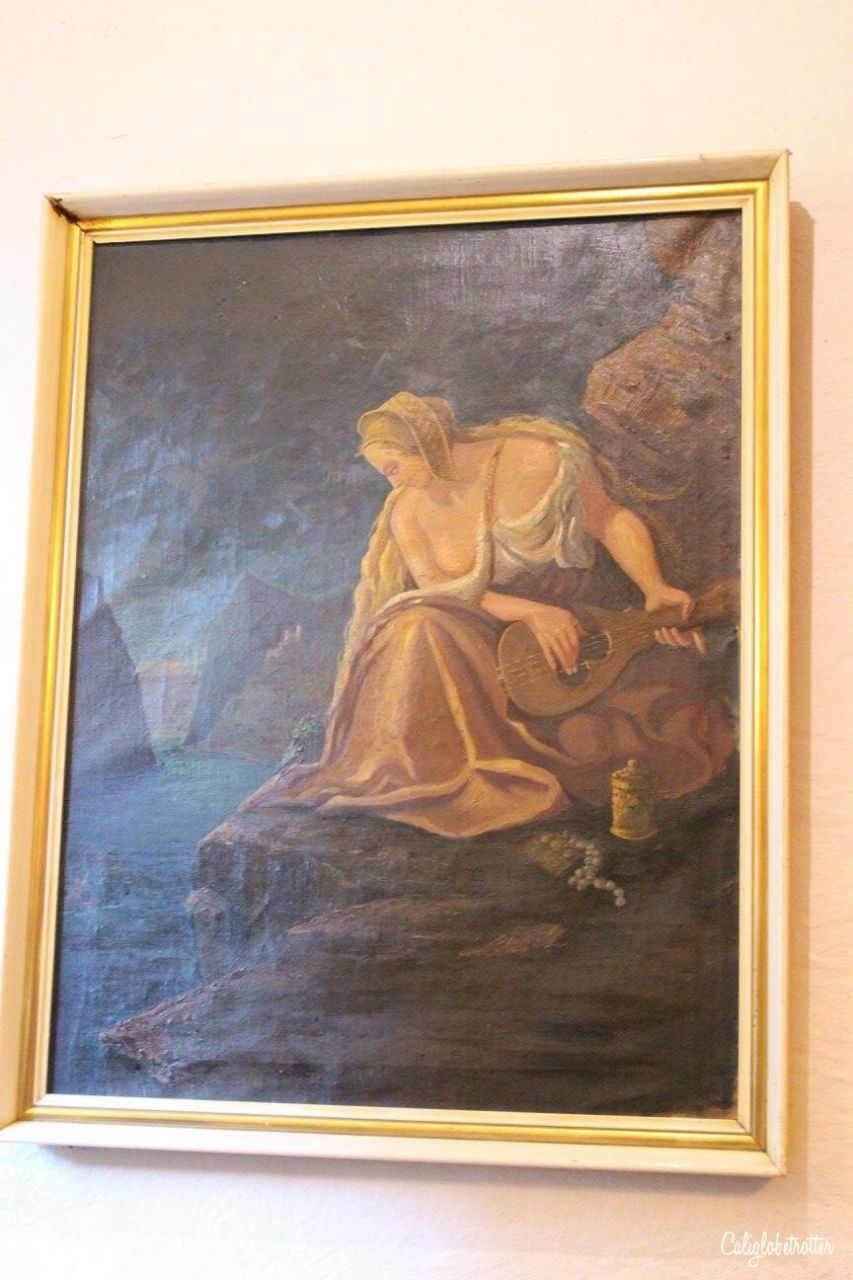 The Middle Rhine is considered to be the epitome of Rhine Romanticism and has inspired many story, poems and songs about its beauty.

The legend of the Loreley was created by Clemens Brentano in 1801. The story says that a beautiful maiden by the name of Lore Ley waited on for her lover on the rock at the narrowest point on the Rhine river. He never returned and her heart was broken.

The legends says that her spirit sits on the rock combing her long hair and singing, waiting to seek revenge on her unfaithful lover and all men. Sailors are so enchanted by her beauty that they crash their ships on the rock or run aground in shallow waters.

Lore Ley was accused of bewitching and murdering men and was sentenced to death. As she is being led away, she tries to look down at the Rhine river once more. After she is able to climb the rock, she throws herself from the rock and to her death.

The romance of this mythical legend increase with the sound of the waters of the Rhine echoing throughout the gorge of the enchanting siren Lore Ley singing upon the rocks. The rocks have echoed her song since that day onward and today the Loreley is one of the best sights to see on the Rhein River. You will likely see it while traveling by boat on the Rhein River. 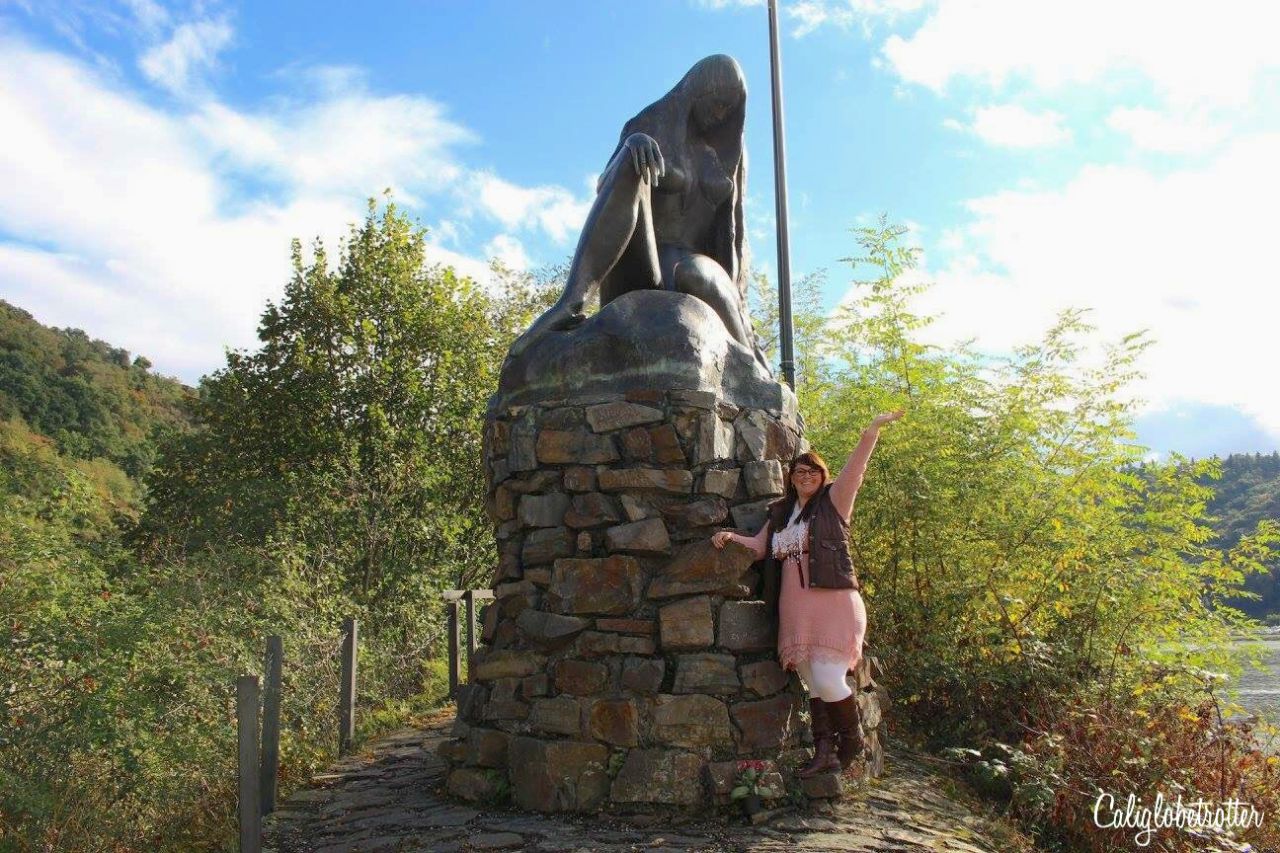 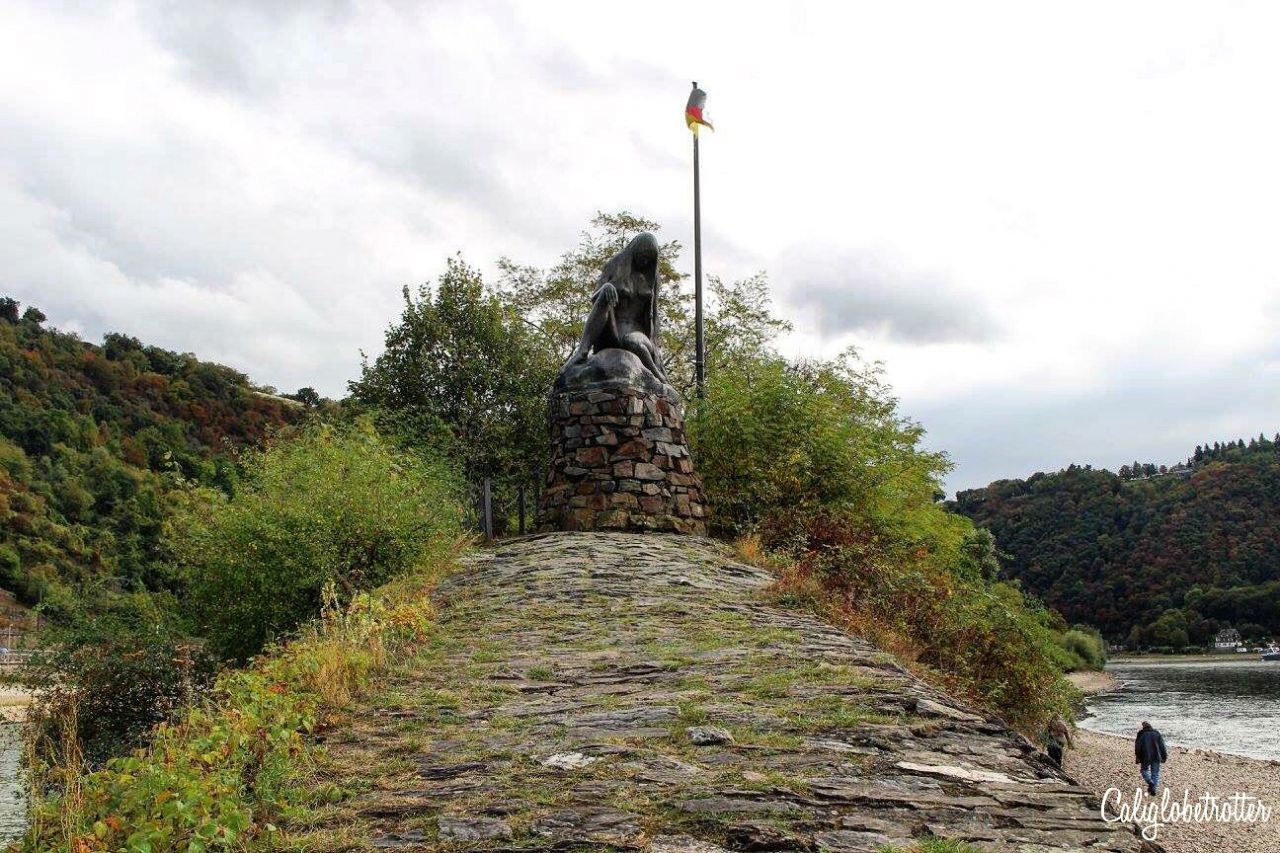 The Lorelei though, is a rock that sits on a 194 meter cliff rock on the Rhine river and this area is the narrowest part of the Rhine river that flows between Switzerland and the North Sea.

As you’re driving along the Rhine, in the direction (and on the side of the river) leading to St. Goarhausen, you’ll quickly veer to the edge of the river and park in a dirt parking area. You’ll see a very small sign saying “Loreley” and a new river map monument making the spot. Then you’ll need to walk down the rocky island for about 5-10 minutes before reaching the Loreley at the very tip of the island.

While visiting the Loreley on the island, you can see the town of St. Goarhausen just a bit away on the right hand side, with Burg Katz perched up in the hills above the town. We would later stop (after coming back down the mountain) and have lunch in this town at the Loreley Weinstübchen which offered a Riesling schnitzel. 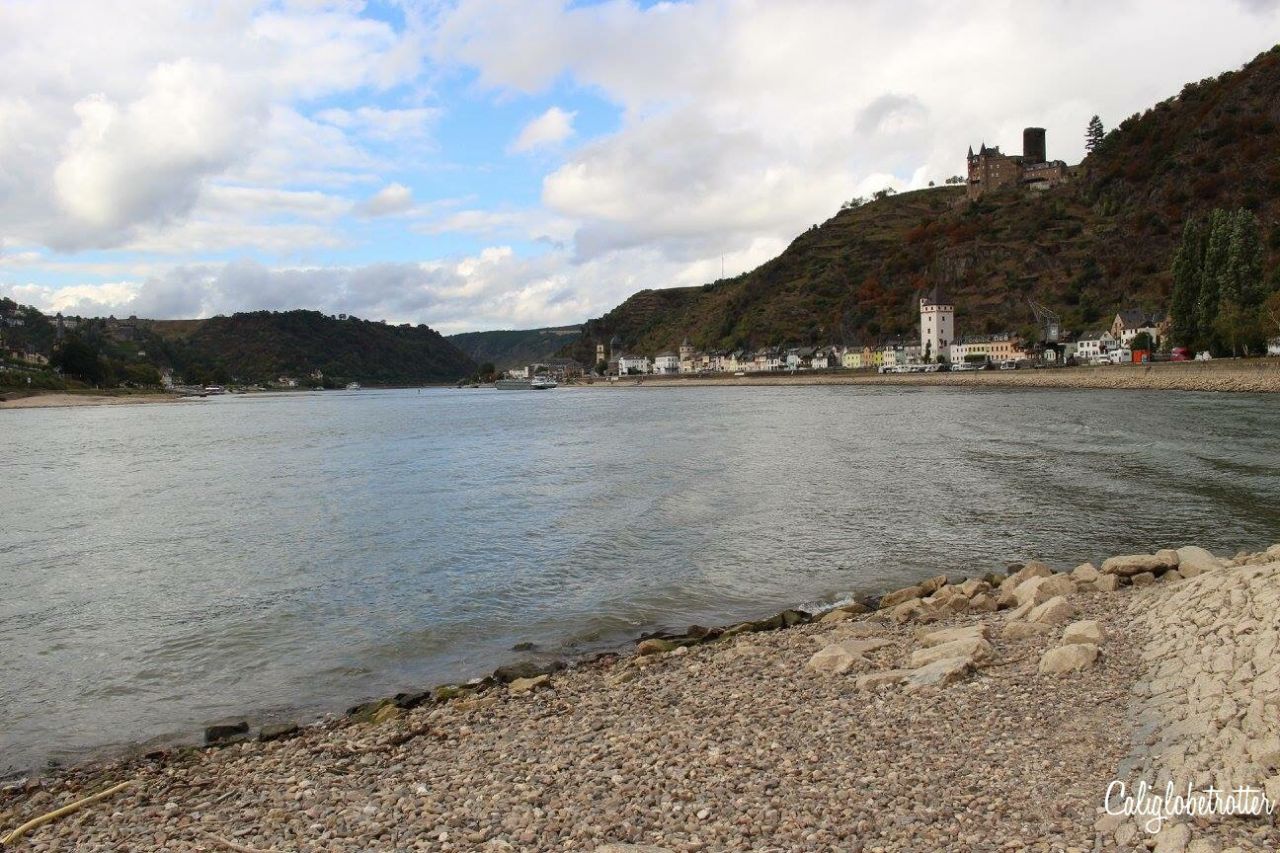 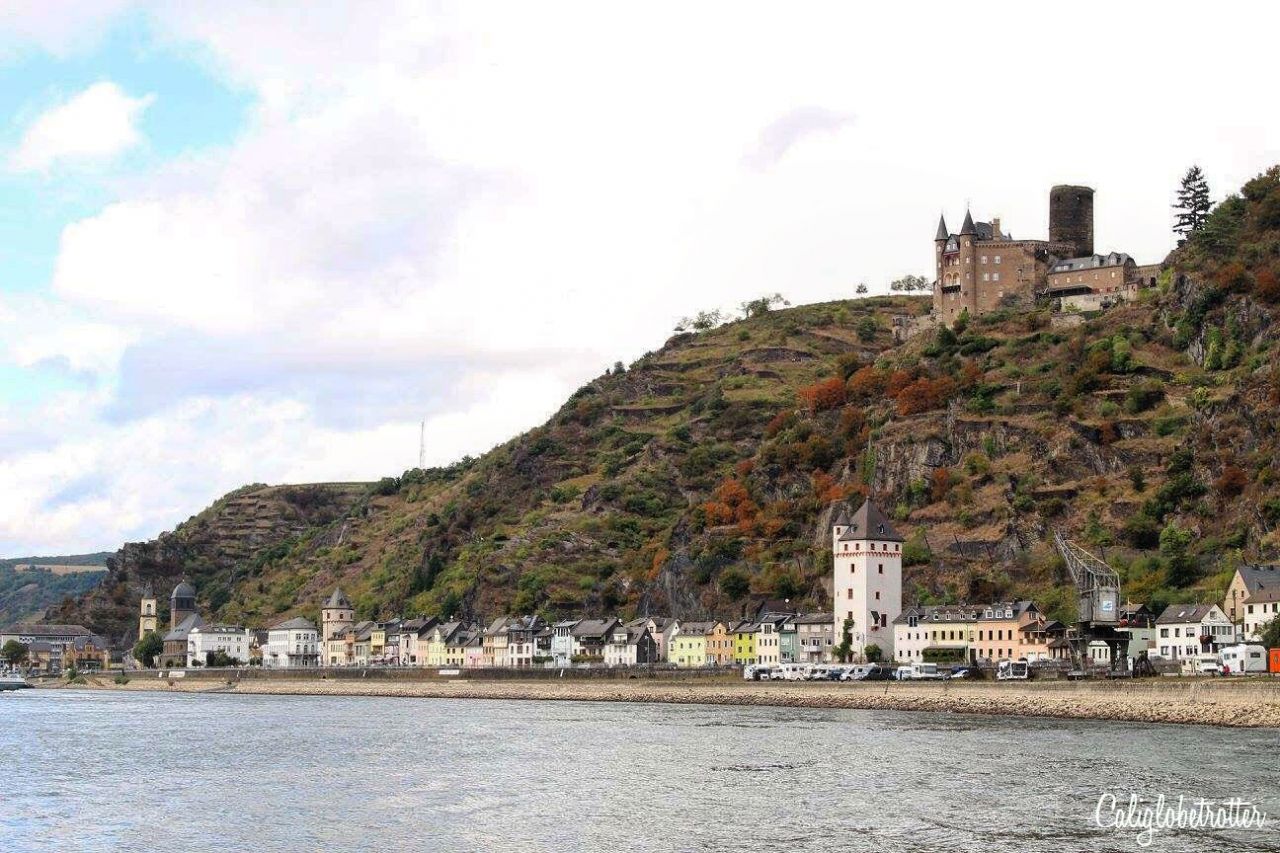 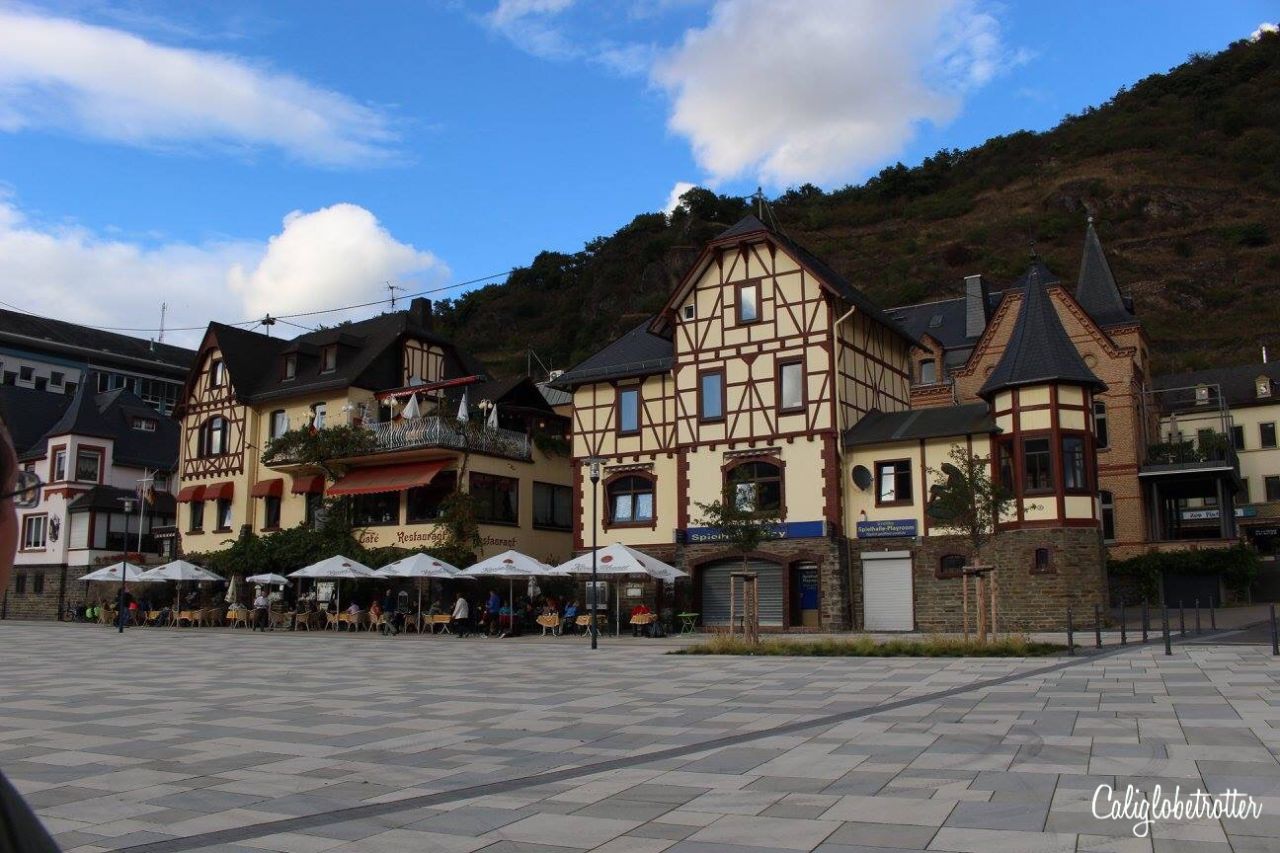 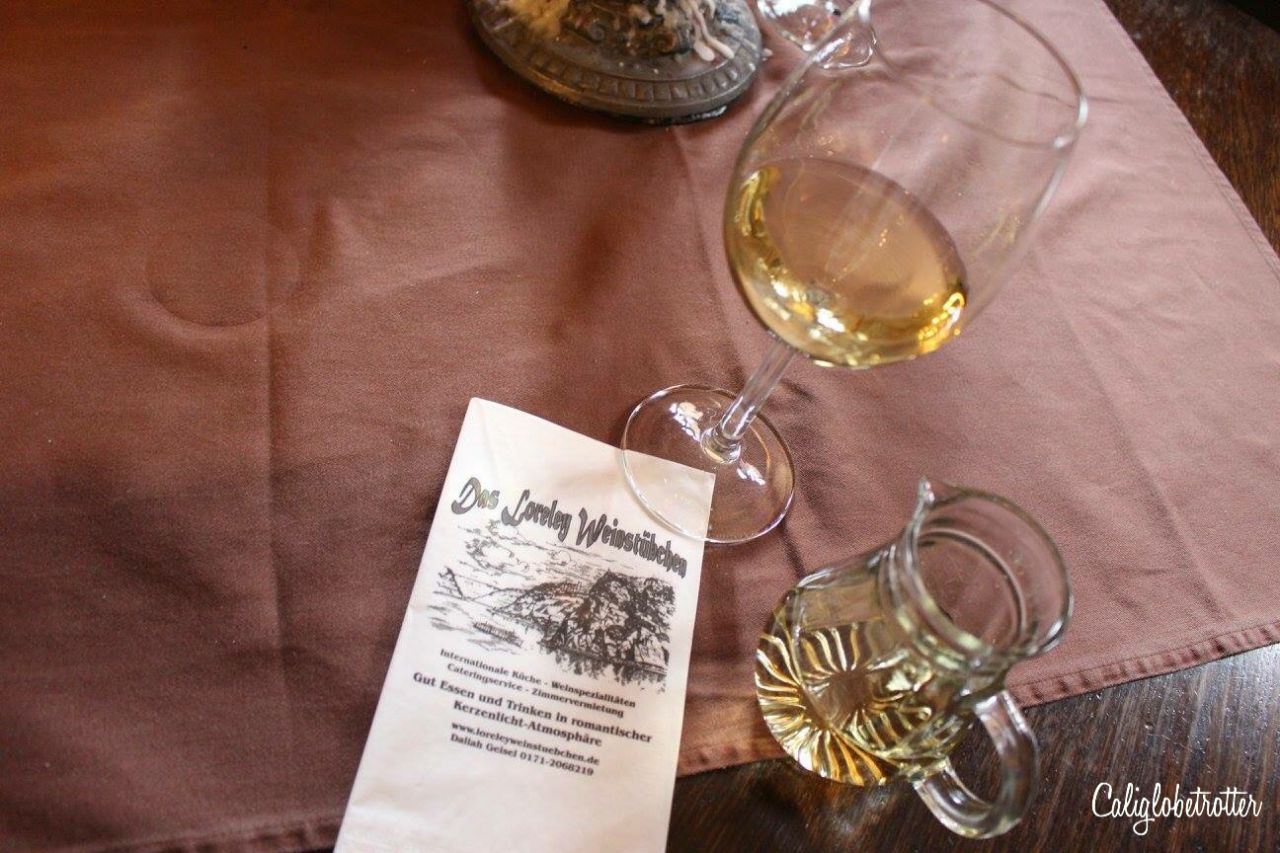 After visiting the Loreley on the small island, we headed up to the Loreley Rock, which over looks the valley, where you can really catch a glimpse at how hard it is for large ships to navigate their way through this narrow and tricky part of the Rhine river.

At the top of the mountain, you’ll find a restaurant, (currently undergoing some remodeling and upgrading to Loreley 2.0). It is easily accessible by car, just following the signs on the road.

It is worth going up to the cliff for the amazing views it provides over the river! Clearly, the Rhein region is one of the best places to visit in Germany in autumn when the rolling hills are ablaze in colors of gold. 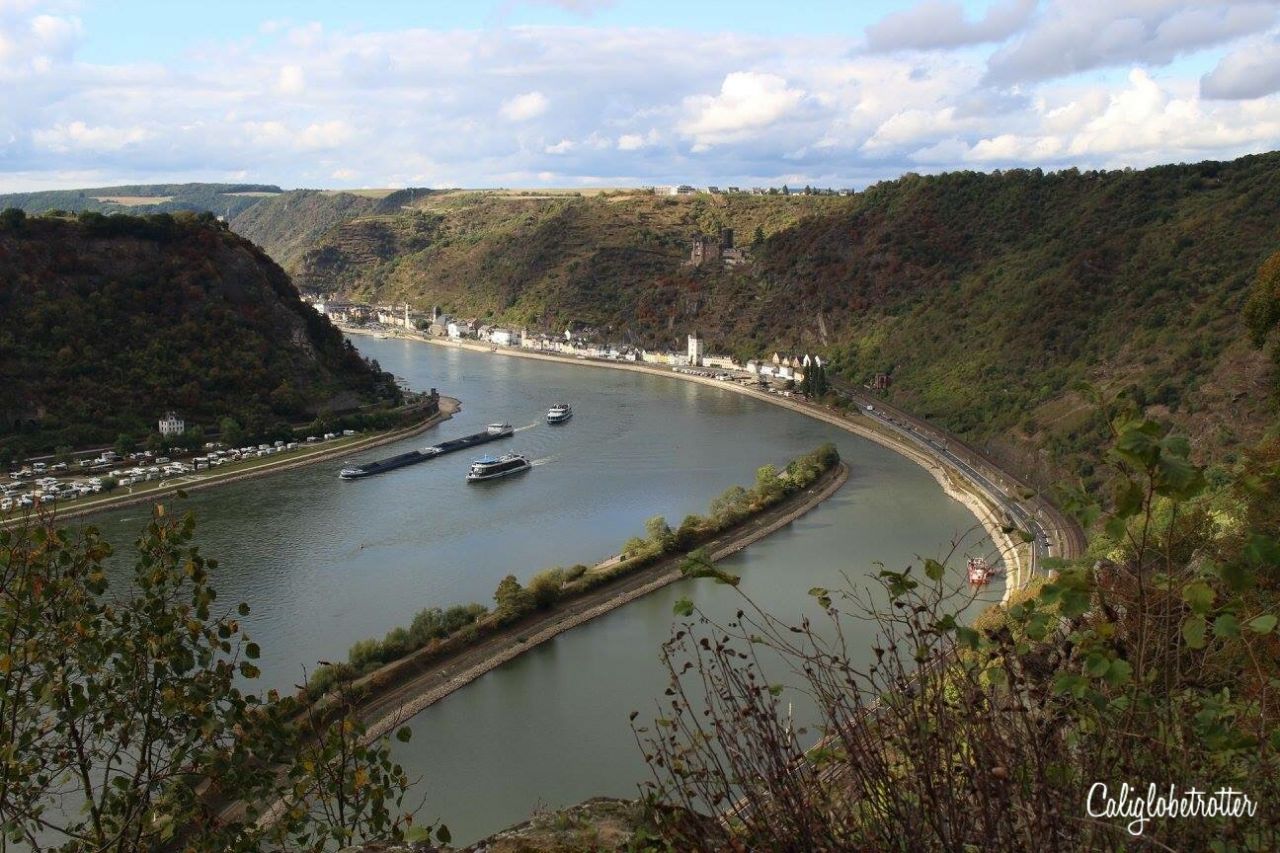 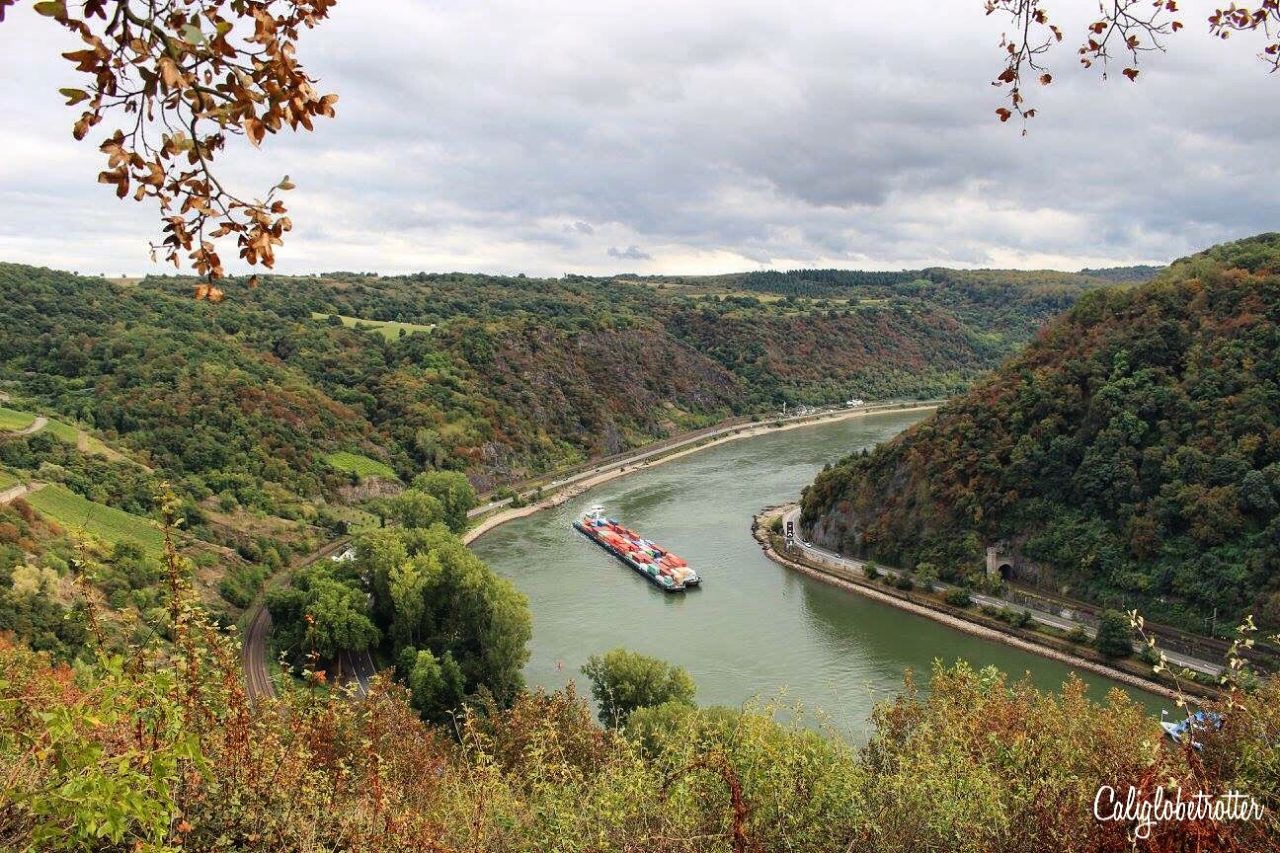 The Loreley is a water spirit, similar to mermaids but many believe she is more of Siren than a mermaid.

Not until Heinric Heine translated “Die Loreley” and portrayed her as a Siren did the legend became famous.

I cannot determine the meaning
Of sorrow that fills my breast:
A fable of old, through it streaming,
Allows my mind no rest.
The air is cool in the gloaming
And gently flows the Rhine.
The crest of the mountain is gleaming
In fading rays of sunshine.

The loveliest maiden is sitting
Up there, so wondrously fair;
Her golden jewelry is glist’ning;
She combs her golden hair.
She combs with a gilded comb, preening,
And sings a song, passing time.
It has a most wondrous, appealing
And pow’rful melodic rhyme.

The boatman aboard his small skiff, –
Enraptured with a wild ache,
Has no eye for the jagged cliff, –
His thoughts on the heights fear forsake.
I think that the waves will devour
Both boat and man, by and by,
And that, with her dulcet-voiced power
Was done by the Loreley. 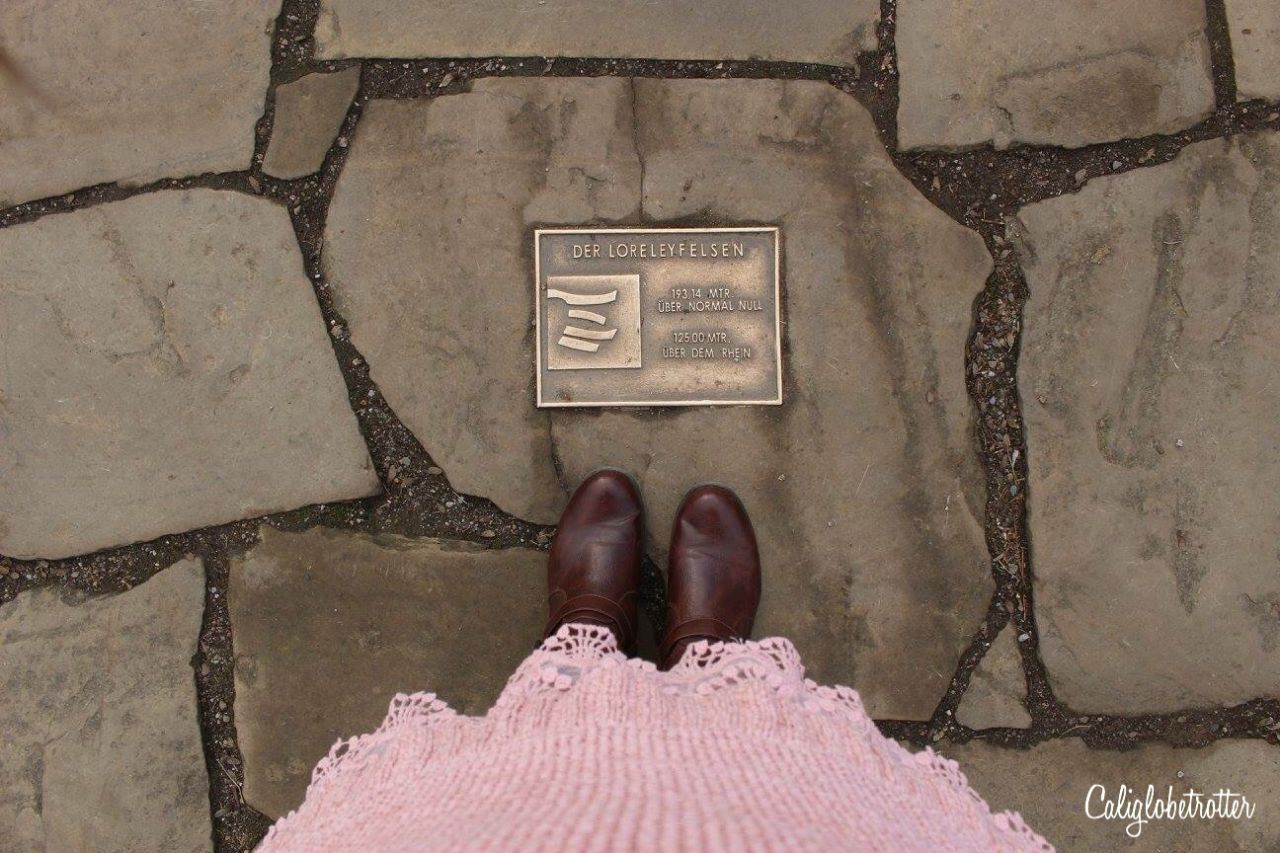 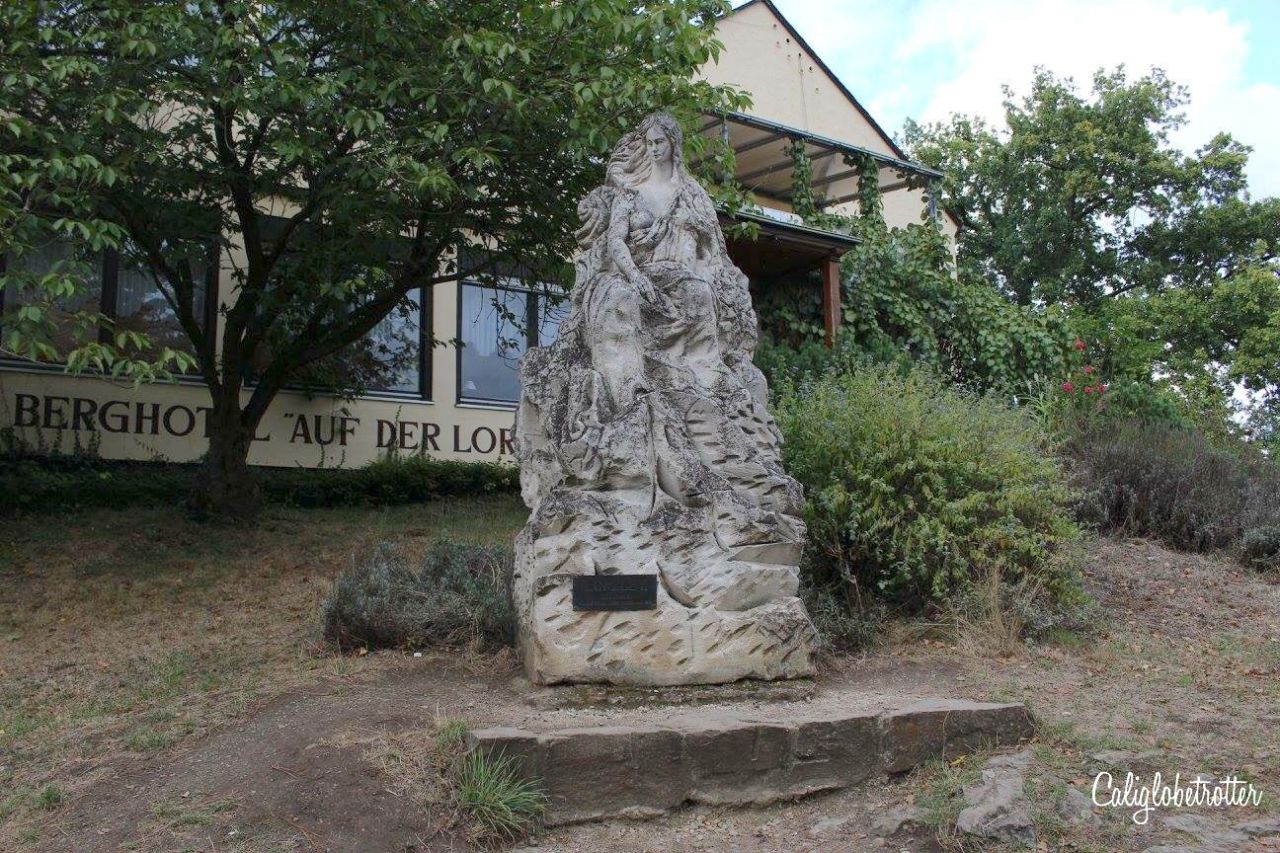 Lorelei has become a well-known name thanks in part to the role Marylin Monroe played in Gentlemen Prefer Blondes and the TV Show Gilmore Girls. I commonly get told that my name comes from Gilmore Girls and yes, I know my name is on the show, but no it is not FROM the show! 🙂 And for the record, they spell it wrong! It’s not Lorel-a-i. Get it right!

Although for a long time I didn’t like my name as a kid, I love it now and I love how unique and rare it is. It makes it special. 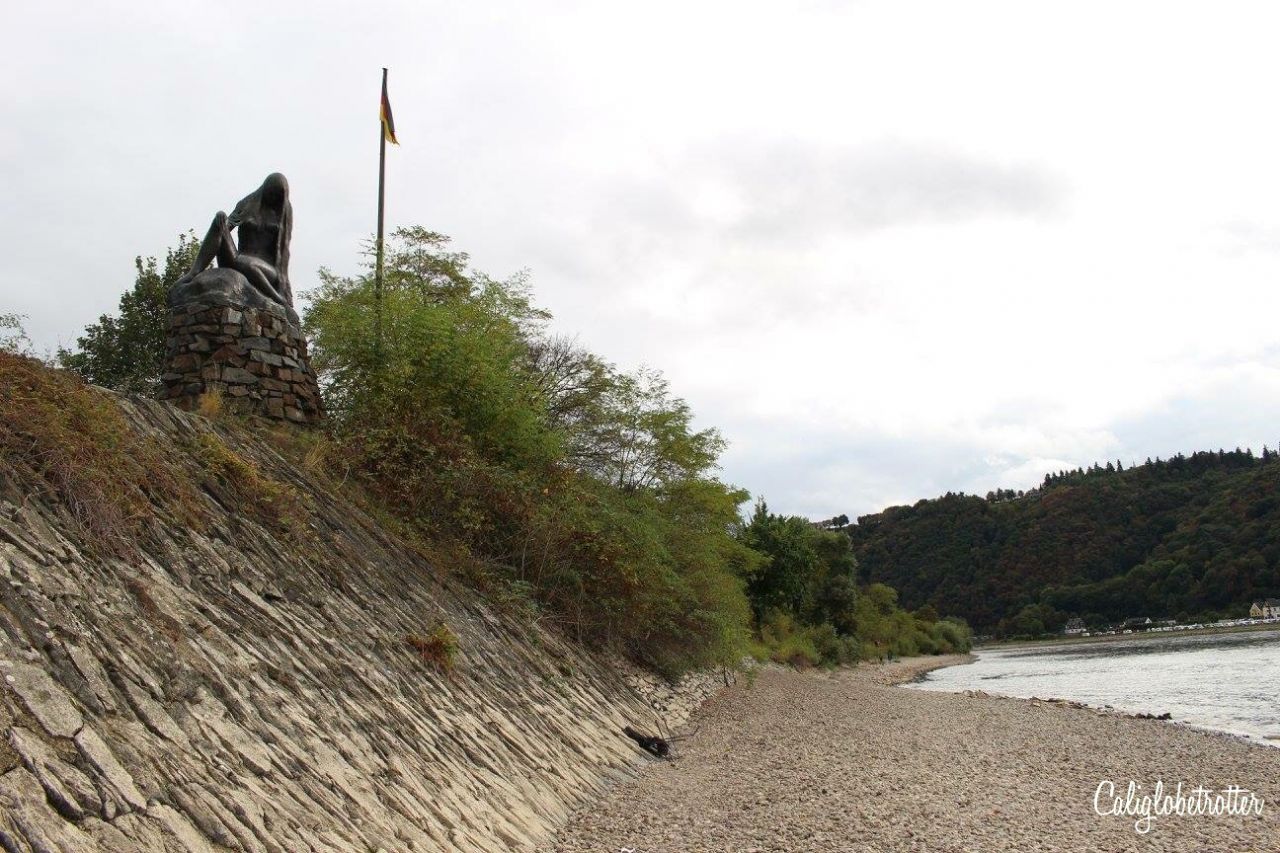 Tips for Visiting the Loreley am Rhein: 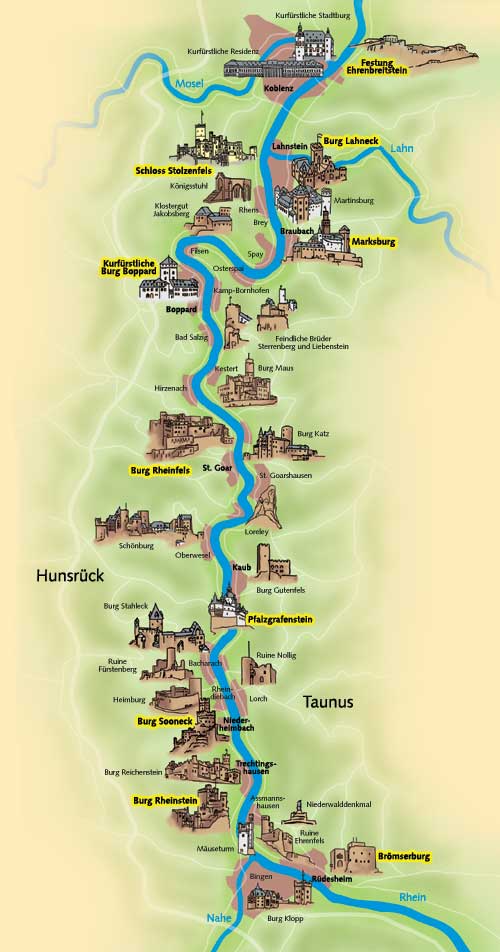 You can park at St. Goar, take the ferry across the Rhine, walk from St. Goarhausen (St. Goar’s sister town on the opposite side of the city, to the peninsula. The statue is on the tip of the peninsula.)

You can also park in St. Goarhausen and walk from there. Or if you are very lucky you can find a few parking spots along the road where the peninsula reaches the mainland.

From the main road to the statue is about a 30 minute walk.

To visit the top of the Loreley Rocks (Loreleyfelsen):

This address may be helpful in your GPS:
Auf der Loreley
56346 St. Goarshausen

There is a hotel and restaurant named Berghotel auf der Loreley with parking and trails behind leading to the lookout point.

As we would be visiting both Rüdesheim am Rhine and Bacharach before stopping at the Loreley, we opted to stay in the middle of both at the cute little B&B Altes Rathaus ⭐⭐⭐ in Aßmannshausen. The hotel is actually an old city hall building directly located along the Rhine River!

Towns to Visit on the Rhein River

The Darling Storybook Town of Rüdesheim am Rhine

The Delectable Town of Bacharach

Further Ahead & Worth The Visit: 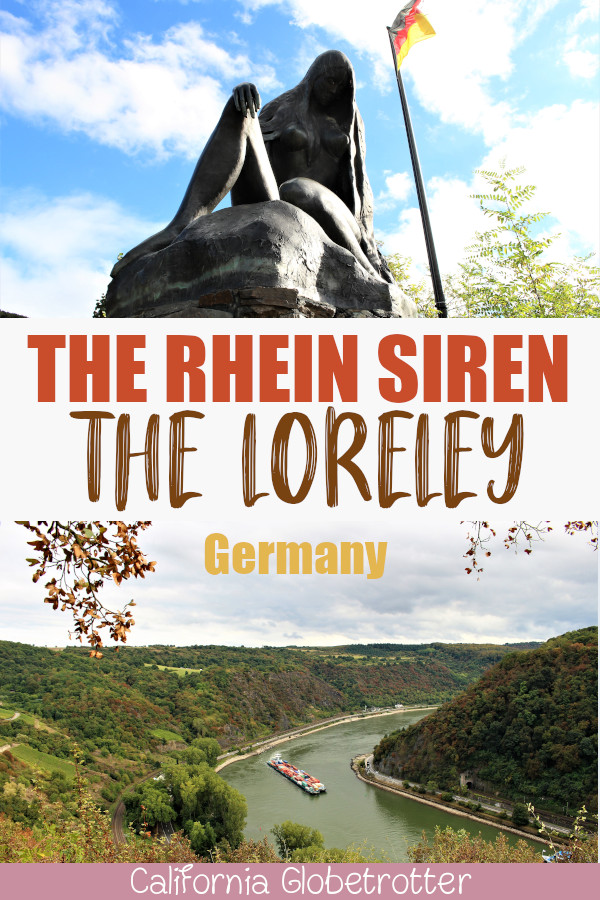 Replies to The Loreley am Rhine