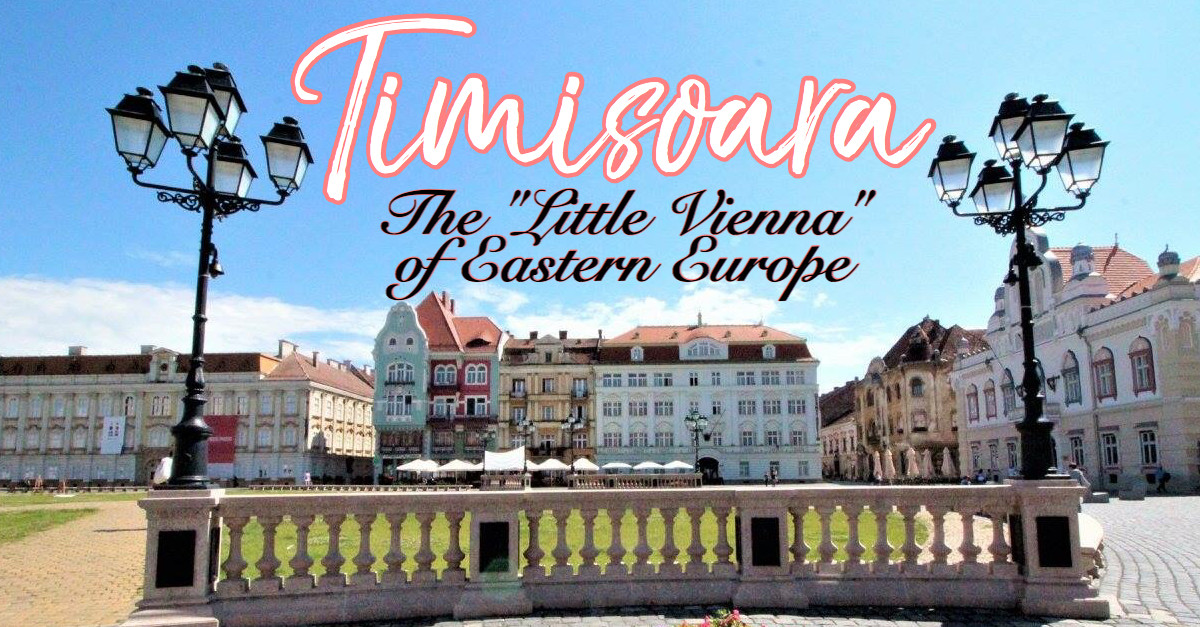 Ok, by now you’ve heard of Bucharest and the country’s most impressive castles and learned about the myths and legends of Dracula, but have you ever heard of Timişoara? Probably not. As the third largest city in Romania, it’s one of the loveliest urban centers as it shakes off the remnants of a dictatorship and is today one of the top destinations in the Balkans to visit. 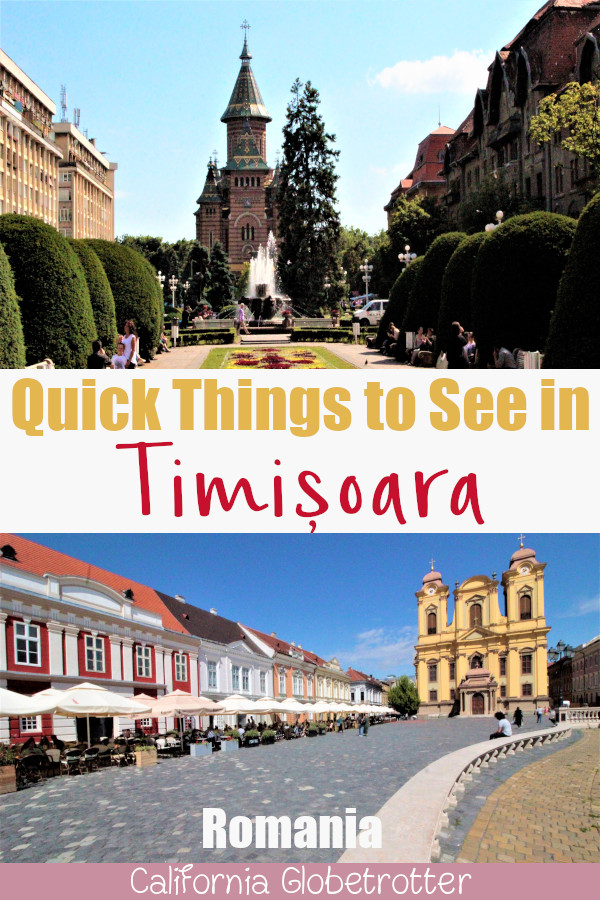 Not far from the border to either Serbia or Hungary, Timişoara is a major transport hub which also made for the perfect pit stop to spend a few hours stretching our legs and grabbing a bite to eat and an easy day trip from Bucharest. When I first saw a beautiful picture of the town on Pinterest, I knew I had to go. However, I underestimated just how beautiful it would be and that we clearly would have needed more time to see everything. At the time of my research, I hardly found many blog posts from travelers who had visited the city. Now, I see it popping up more and more on my Pinterest feed, which goes to show the growing popularity in this beautiful town!

History of the City

Timişoara was built around an ancient Roman fortress and throughout the decades, the Turks, Tatars, Austrians, Germans and Soviets have all left their mark on the city, blending various types of architectures. Located in the Banat and Crisana region of Romania, the city had a prosperous beginning as a major transport hub between Serbia and Hungary.

The city claims to have had the first public water supply in Romania, the first to have street lighting in Europe, only second after New York and one of the first in the world to have horse-drawn trams often giving the city the nickname “Little Vienna”. That’s a lot of firsts!

The city was built around the Magyar fortress and the surrounding marshes between the Timis and Bega Rivers. The marshes were drained, creating the Bega Canal which today separates the Old & New Town.

The most significant moment in the city’s history came in 1989 when the citizens ignited what became known as the 1989 Revolution which led to the removal of the country’s dictator – the end of an era and the beginning of a slow but steady move to democracy. Upon arriving into the town, the city proudly displays a banner reminding and informing all, that they were responsible for starting the revolution.

What to Do in Timişoara

If you’re wondering about main sights in Timişoara, then I have you covered for the basics! Before we even arrived in Timişoara, I knew EXACTLY where I wanted to begin our sightseeing. In the heart of Piata Unirii (Union Square), the number one top rated thing to do in Timişoara by Trip Advisor, where a plethora of beautiful lamps decorate the square, and being a lamp lover, I didn’t want to risk the chance of not having enough time to capture every.single.angle! This is the kind of lovely square I could easily spend hours upon hours enjoying! 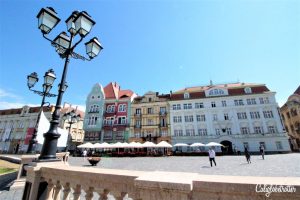 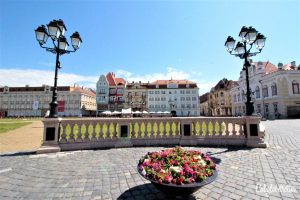 After a bit of sprucing up, the loveliest square in Timişoara is without a doubt Piata Unirii with its colorful array of Baroque urban design. The heart of the square is dominated by the Plague Column honoring citizens who perished to a rather violent attack of the disease back in 1740. Stretching from either direction from the column is a lovely urban park where you may find artists displaying their artwork or some lounge chairs to soak up the sun with walking paths crisscrossing through the small park. If you look closely enough, you can see that the square is still undergoing major renovations. 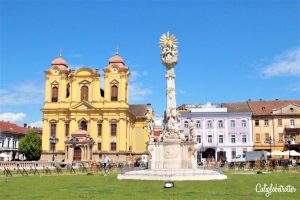 On the eastern side of the square you’ll find a deep Tuscan yellow Roman Catholic Church in a typical Viennese Baroque style with a line of restaurants enticing you to sit and enjoy the view for a bit. Don’t mind if I do! 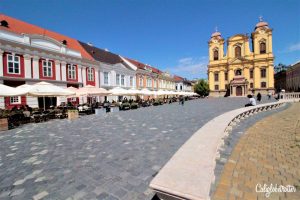 At the opposite end, you’ll find the Eparchy of Timişoara next to the Serbian Orthodox Cathedral which was built at the same time as the Roman Catholic Church between 1736-1754. 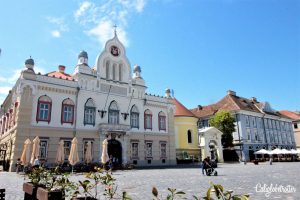 Just off Strada Florimund Mercy, one of the many alleys leading into the square is a statue called Supermam Eva which was Timişoara’s first statue in the historic city center sculpted by Virgil Scripcariu. Locals are dissatisfied with several new statues throughout the city as they are not representative of the city. The mayor claims that “Timişoara will have a street museum, an open-air museum, these statues are works of art”. 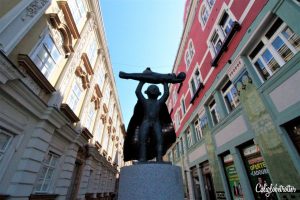 Piata Libertatii and the Town Hall

Between Piata Unirii and Victoriei is a smaller square, Piata Libertatii (Freedom Square) which was once the setting for the execution of György Dózsa in 1514. He was the leader of a peasant uprising that swept through Hungary and Transylvania. After firing up an iron throne and crown, Dózsa was crowned “King of the Serfs” and seated on the red hot throne before his body was ripped into pieces – quiet a gruesome death if you ask me! His followers were starved and forced to watch his execution before they too met the same fate.

Today, the Old Town Hall houses the university’s music faculty and in the center of the square is another smaller Plague Column honoring more citizens which fell victim to the plague. 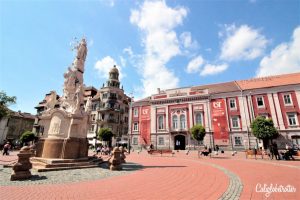 One of the most attractive boulevards in Timişoara is the elongated pedestrianized zone, Piata Victoriei (Victory Square) flanked by cafes, restaurants and shops and a lovely little park down the middle. Flanked by the Romanian Orthodox Cathedral at the southern end and the charmless Opera House at the northern end, this was the busiest square and the most lively. 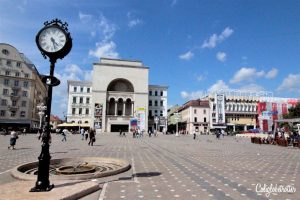 It was here that in December 1989, the Romanian revolution really took off. Demonstrators gathered here to prevent the internal exile of the Reformat pastor László Tőkés. He was increasingly outspoken in his criticism of the Romanian government and the church. He often protested against the systematization program which was the demolition and reconstruction of existing villages, towns, and cities either in whole or in part, with the goal of turning Romania into a “socialist society”. Tanks rolled down the boulevard and brought with it a series of bloody and tragic battles and many buildings are still riddled with bullet holes. The dictator, Nicolea Ceaușescu had ordered the army to open fire which eventually would lead to his overthrow and execution.

At the southern end of Piata Victoriei stands the Romanian Orthodox Cathedral which blended neo-Byzantine and Moldavian styles. Built between 1936-47, the interior was completed much later due to being halted during WWII. The cathedral will forever be infamously synonymous with the deaths of many children and young adults who were gunned down during the 1989 Revolution. Today, it’s one of many popular attractions in Timişoara. 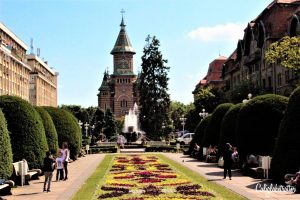 As history would have it, during WWII, after Romania switched to the allied side, the cathedral was targeted by the German air force. Six bombs were dropped on the cathedral, but only one exploded causing the loss of important relics, but limited the damage. It is considered to be a “true divine miracle” that all six did not explode. 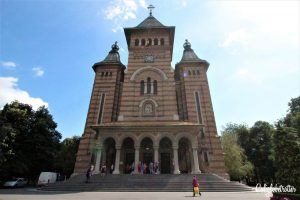 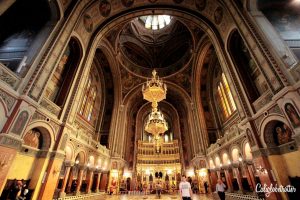 How to Get to Timişoara

Located not far from the border of Romania between Serbia and Hungary, Timişoara is a great day trip from Belgrade or even just a 2 1/2 hour drive on the A1 to Hunedoara (Corvin Castle). If you have a navigation system, simply type in Strada Sfântul Ioan 3, Timișoara, Romania for parking just off to the left of Piata Victoriei.

Just writing this post makes me want to kick myself for not having planned to stay longer in Timişoara. It is truly a town of squares with a young hip vibe seeping through the entire place. The architecture is absolutely beautiful and the history tragically interesting. I honestly wouldn’t mind returning in a few years time to see how much the city has been restored and how the youthful university students will have turned this beautiful town into their city. And I realize now that when it comes to Timişoara tourism, there are a lot of things to do which we missed out on, for example, there are many cool craft beer bars in Timişoara to get a better sense of the youth that are making this city their own!

If you’re driving into the town, be forewarned about the horrific traffic that plagues the city in a constant deadlock. Hopefully by the time we visit again one day, this problem will have been improved.

Replies to Timișoara: The “Little Vienna” of Eastern Europe