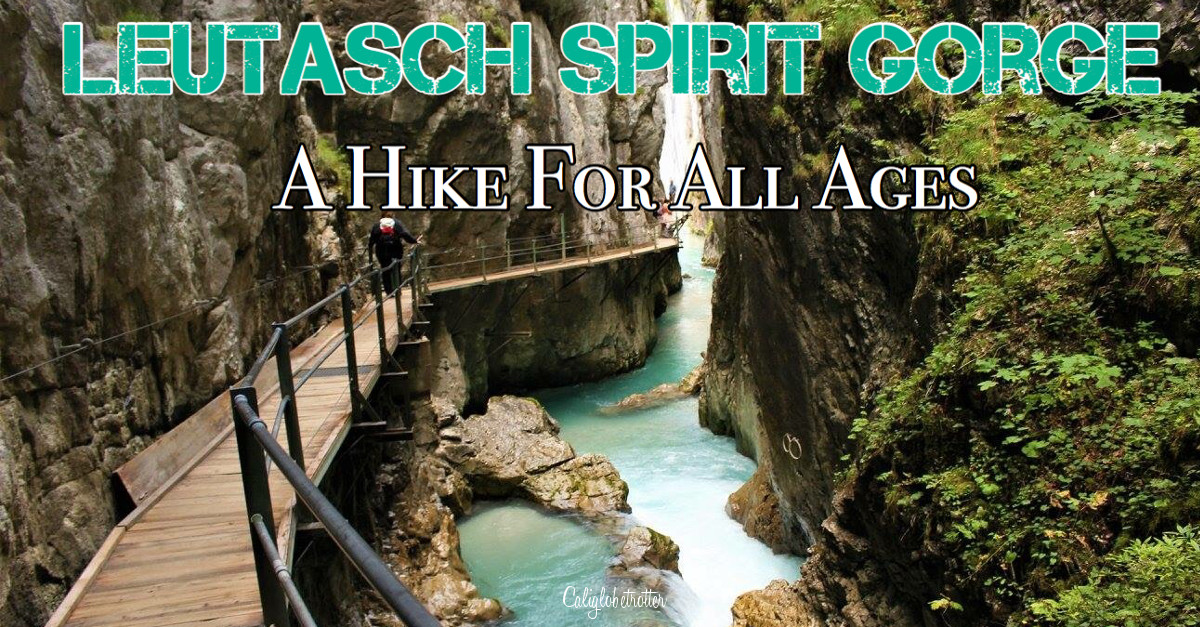 It is said that the Leutasch Spirit Gorge is inhabited by a spirit and his goblin minions. For centuries, people believed that a spirit had come down from the mountains and hid in the most inaccessible corners of the gorge. The goblins would dance in the night, especially when the river was overflowing from the spring melt water. To this day, the Spirit nor the goblins have ever been seen.

But that is only part of the magic that lies within.

Love Hikes? PIN IT FOR LATER!!

Tucked away in the Limestone Alps which border Austria and Germany, near the small town of Mittenwald, is a small, winding gorge of such crystal blue waters and legends is the Leutasch Spirit Gorge (Leutasch Geisterklamm) and is one of the best hidden spots in Germany for a hike!

To reach the gorge, you must follow a small dirt path behind a neighborhood, with signs leading you in the right direction before you come to a hut where you can buy tickets and also some snacks. 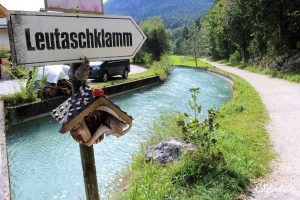 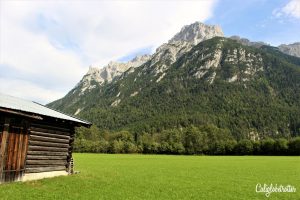 The gorge wasn’t opened to tourists until 2006 thanks to a 1.4 million euro project that was funded to provide steel walkways and bridges over a distance of 970 meters. Today, the gorge is the longest and most accessible gorge in the Limestone Alps. It says that the gorge is mostly accessible all year round, but it depends on how much snowfall there is. Today, it’s one of the best hikes in Germany perfect for those of all ages!

Technically, there are two portions of the Leutaschklamm. The first portion is the privately owned ‘Leutaschklamm Wasserfallsteig’, a short walkway to a 23 meter high waterfall inside of the gorge, which you must pay a small fee to visit. The second part is the “Leutascher Geisterklamm”, which is the name for the walking/hiking route around the area, covering most of the gorge. The entire path is the least strenuous hike ever and is suitable for all ages and for beginner hikers like myself.

Head first to the Mittenwald Gorge Kiosk and take a quick gander through 200m trail which hugs the cliffs just feet above the flowing crystal blue water and make your way to the rushing waterfall that awaits you. Here, you’ll have to pay 3 € per person/ 1 € for children. Trust me, you’ll want to pay the entry fee to visit the waterfall! 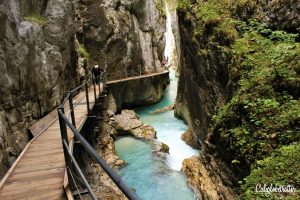 The wooden path clings tightly to the cliffs with wire fencing. A small 5 minute walk to the waterfall makes it the perfect amount of time to stop and see the gorge if you are low on time.

However, if you are interested in more hiking and running into goblins, then you can chose from two trails, or even combine them into one large hike by starting at the Mittenwald Gorge Kiosk.

Here, you can go left, over the bridge or right up into the hills (which was actually the back way). It doesn’t really matter in which direction you go because either way, you end at the same place you started.

As we hadn’t realized it was technically the end of the Goblin Trail (Blue trail), we still enjoyed the shorter version of the hike. Little goblins guided us on our walk giving up pieces of information about the valley and the glaciers that had once been here. The Mountain Spirit Gorge Trail (Red Trail) is much longer.

This is a family-friendly hike fit for anyone of all ages, including children as the trail is filled with legends of spirits and goblins which guide you on your trek through the mountains offering interesting snippets of information about the woods as far back as the Ice Age.

As we began our trek, we soon realized that these trails were not clear wooden pathways but instead rocky nature. Of all the research I had done, everything looked as if it was a man-made path, easily accessible and didn’t require hard core hiking shoes. How wrong I was. However, the hike is easy enough for ballerina shoes or even sandals. Just be forewarned about rocky sections of the hike. 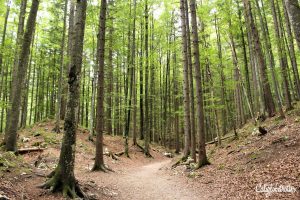 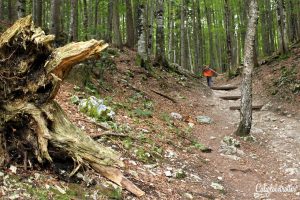 Along the way, quirky goblin names such as Goblin’s Hump entertained us, so as not to focus too much on the “difficulty” of the hike. We saw families with little children stopping to read the signs and look for goblins before finally reaching the Panorama Bridge.

Upon reaching the Panorama Bridge, the path turns into a metal walkway clinging to the cliffs, definitely not fit for those afraid of heights. Thanks to human engineering, us meager humans can trek further into the gorge where once only a spirit would have dwelled. I have searched and search to no avail for an exact height of the bridge, but it was high. Along the path, there are several boards with information about myths, geology, flora and fauna from the surrounding area. In addition, there are some interactive installations and games for children. 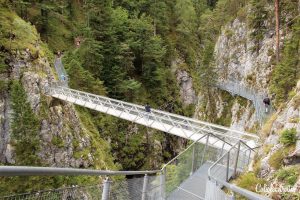 It filled me with a rush of anxiety and excitement at the same time as I couldn’t believe how beautiful the ravine below my feet was and how amazed I was that I actually had done this! I am not afraid of heights, but this hike slightly made me question my sanity. So, I’d say tthat this would be one of those hikes NOT for people with fear of heights! 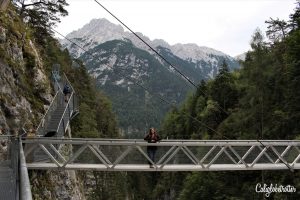 It didn’t help that the goblins had named part of this gorge the “Shivers of Hell” but did make me feel better when reading about the Spirit’s angry temper.

Legend has it that the Spirit was traveling with a Fairy friend who told him stories from all over the world. But then she left him to play with the goblins from the Mittenwalder meadows. The Spirit was so angry he caused an avalanche of stones and cast a spell upon the Fairy so that she could never tell stories again. But one day, the Spirit caught his beard on the railing of a bridge. He desperately cried out for help. The Fairy had been following him to ask for her voice back and offered to help. The Spirit was still so angry at her that he would rather be stuck than let her help him. Eventually he was able to free himself, but the Fairy is still trapped in the canyon to this day.

We stood here enjoying the view of the rushing water below us as well as a view of the mountains in the distance peaking out from between the two mountains we were currently standing in between. 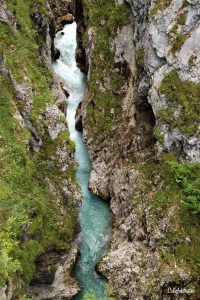 After bravely crossing the Panorama Bridge, we were now half way through with the Goblin Trail and now officially in Austria. The pathway began to clear a little bit offering a bit of relief from the rocky pathway.

Then we came upon a surprising amount of Goblin Stones stacked one on top of the other left behind by goblins or wherever the glaciers had moved them to. 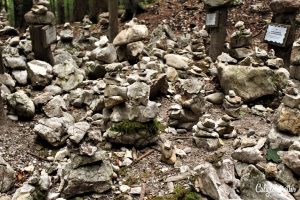 We knew we were reaching the end of our hike when out of no where, the Gasthaus Gleischerschliff appeared. On a warm, sunnier day, I could imagine this hotel/biergarten offering a little bit of refreshment before hikers continued on about their way. However, as we had gone on a somewhat gloomy/windy day at the beginning of fall, the trail was relatively quiet. 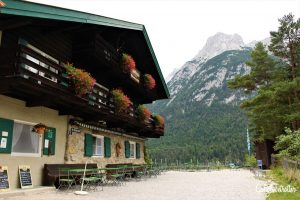 You can visit the Leutaschklamm from either the Austrian side, coming from Innsbruck via Seefeld, or from the German side coming from Garmisch-Partenkirchen through Mittenwald. If you are arriving via public transport, it’s best to choose Mittenwald as your destination and walk from there.

There is an official car park near the village of Schanz. A parking day-ticket will cost you € 5 here. Alternatively, you can park in Mittenwald in the center of town and walk to the path.

Only the Wasserfallsteig requires a small entrance fee (€ 2), however the rest is completely free for all!

The Leutaschklamm is open every day, year round weather permitting. However, should there be severe weather such as snow or rain, the pathway may be closed, check in advance.

The Charming Village of Mittenwald

After accomplishing our hike for the day, we decided we deserved a hearty meal with a nice, refreshing beer so we headed into the center of Mittenwald, one of the cutest villages in Bavaria! 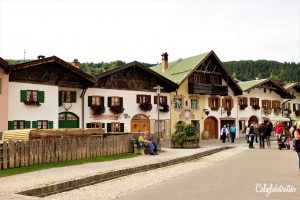 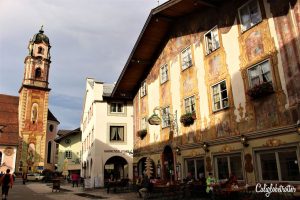 Mittenwald is a small district of Garmish-Partenkirchen in the valley of the River Isar in the Bavarian Alps. The main part of the town is a pedestrian zone only and the buildings are covered in “Lüftmalereien” (frescoes) depicting traditional Bavarian customs as well as frescoes dedicated to Jesus. The town is dominated by the Parish Church of St. Peter and Paul which is also beautifully covered in outside frescoes. The town is quite renown for being a climatic health resort town as well as home to violin makers.

Not a corner of town is without beautiful frescoes painted on its outer facade and each corner is more adorable than the last, clearly making it one of the best places to go in Bavaria which is also one of the easiest day trips from Munich!! 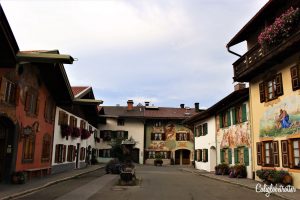 Also in Mittenwald, which we didn’t have time for was the Karwendel Cable Car which takes you up the mountain side and offers what I am sure are to be amazing views over the valley. 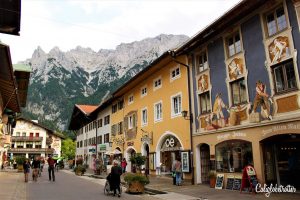 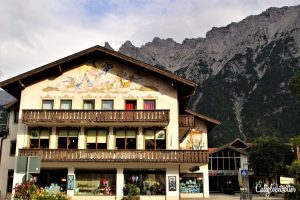 While we weren’t here for the Mittenwald Almabtrieb, it is on my to-do list. An Almabtrieb is the return of sheep, cows, and goats from lush Alpine pastures back down into the valleys to be returned to their owners. Some ceremonies are more elaborate than others with the animals being crowned for good behavior before they are paraded through the villages.


Walchensee: Is This Germany’s PRETTIEST Lake?

Replies to A Hike for All Ages: Leutasch Spirit Gorge

On our first trip to Poland, I wasn't sure what to